Mr. Sexsmith’s Other Girlfriend: The Life Lessons in Swing Dancing 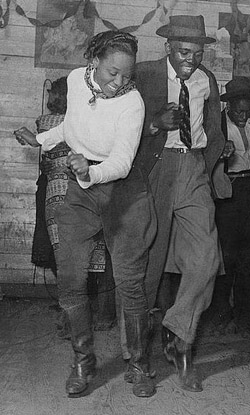 U.S. Library of Congress
Look at your partner when you’re communicating with them.

When you decide to do something, pay attention, commit to it, and follow through.
These are the kinds of things studying swing dancing continues to teach me. My (other) girlfriend Kristen and I just attended an intensive eight-count swing dancing workshop, and I walked away with both the dance steps and some metaphors for life. We have been taking six-count swing for about six months, and we both enjoy the time together, the learning of a new skill, and the abundant metaphors that go along with learning to physically communicate in a partner dance.

There are quite a few happening in New York City, from Midsummer’s Night Swing to dances at Pier 54 to swing on the steps of the Brooklyn Library to monthly dances at the studio where we practice. I want to make time to go dancing, to practice, to make sure to keep the rhythm known in my body, to keep that body memory of the triple-step triple-step rock-step in my legs and hips.

But really, all of this has been warm-up to learn the Lindy Hop, which is fast, athletic, energetic, and all about showing off. It includes hip swivels, throw-outs, and a rubber-band type of sling-shot movement where the two dancers come together, then pull apart, keeping the tension high and the connection tight the whole time.

When an eight-count swing dance intensive class came up on the dance studio’s calendar, Kristen and I jumped at it, and signed up. It was three hours on a Saturday, instead of one hour a week for a month, so finally we could make time for it. The class is designed to take us from the six-count swing dance that we’ve already been learning into the world of eight-count: the basics of the Lindy Hop.

According to our teachers, one of the stories of the origins of Lindy Hop came from a dance marathon at the Savoy Ballroom in Harlem. At the time, in the late 1920s, the dance best known was the Charleston, the very twisty-ankled, knees-in-and-out type of dance that you see flappers doing, with the fringe dresses and the long beads and the short hair. This dance was done both with partners and alone, and when done with a partner, both dancers would do the same thing at the same time.

During one of these dance competitions, hours and perhaps even days into the marathon, Shorty George and Big Bea—a famous dancing duo of the time—were doing this Charleston on and on, and at some point Shorty George decided to do a little “breakaway,” extending his arm and extending Big Bea’s arm before pulling her back in and continuing the dance. They’d been doing the same Charleston for hours, remember, and perhaps they were a little bored with the steps, and probably could do it in their sleep. But then, suddenly, a breakaway, and Big Bea was out with a little bit of space around her, and Shorty George pulls her back in.

And they start to laugh, maybe, and think, Well, that was kind of fun, so they do it again. And again. And Shorty George adds a little twist, or a twirl, and turns Big Bea in a circle under his arm. Or when he pulls her back to her, they turn in a circle together before coming back to their Charleston steps. And voilà, a new dance step is born.

This apparently was around the time of Charles Lindbergh’s historic transatlantic airplane flight, a “hop” across the ocean, which happened in 1927, and “Lindy” was the aviator’s nickname. So when Shorty George and Big Bea were asked later, “What was that dance you were doing?!” They simply replied, “Oh, that? That ain’t nothin’ but Lindy’s Hop.”

In trying to describe to our class the proper way to hold your body, your frame, and your legs, during this dance, one of the instructors said, “You’ve got to remember, this was a dance from a time more chivalrous. This dance was made to accentuate and show off women (who were usually the follows) and about showing off women’s best features. It is not about sucking in your ass, it’s about sticking it out, curving the lower back, and shaking it shamelessly.”

Everyone in the class laughed, a little awkwardly. Stick out our butts? Shake them shamelessly? Heh heh heh. Isn’t that so silly and maybe a little wrong? their laughs seemed to say. But seriously, what’s wrong with a little ass-shaking? Have a little confidence! Have a little appreciation for the roundness and hotness of a jiggling butt. And, as our instructors said, if you don’t actually have that yet, well, just fake it ’til you make it.

Aside from bits of wisdom like “fake it ’til you make it,” the instructors kept throwing all sorts of other dollops into the class, things that apply both to dancing and to life. For example: “Look at your partner when you’re communicating with them.” Dancing is a form of physical communication, so what we’re doing is using our bodies to communicate what to do and where to go, how to move our feet and how to twirl. And because so much communication is done with the eyes, the mouth, the face, keeping some eye contact is a way to further connect with our partner while we’re dancing.

This little bit of wisdom made me remember a time recently when Kristen and I were fighting, and I was lying on the couch, somewhat stubbornly refusing to look at her. She called me on it. I know better than to have a conversation, especially a heated one, without at least some eye contact. I was trying to disengage. It was rude. I will remember this bit of wisdom in swing dancing, and not do it again.

Especially for those of us who lead, in partner dancing, you have to know what you want to do, commit to it, and follow through. Sometimes, especially with more complicated moves or transitions, you’ve got to make sure to keep a firm grip, basically to give the follow no other option but to do what you want them to do. It might sound a bit controlling, but it is also a necessary skill for many times in life: We certainly can’t get our point across if we don’t know what it is. And it certainly applies to my topping and dominance skills, as if I only halfway commit to moving my lover’s body in some way, or giving her sensation somehow, I won’t get the response I am seeking, and I might even put us in a tricky situation.

Aside from being another fun and physical activity I can enjoy with my sweetheart, many of the lessons in swing dancing bring things to the forefront of my mind that make it easier to notice when I am doing them, and make me more mindful of what I do. I can’t wait for the next lesson.
Tags:
Views: 922
Related articles