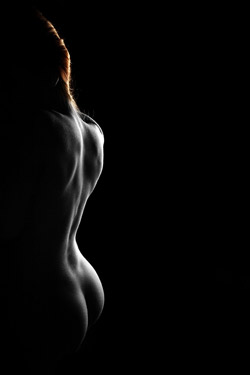 Sometimes protecting someone you love has legal ramifications you might never have considered. When the system puts sex workers at risk, do you break the law to save a life? It's a choice no one should have to make.
We didn’t mean to move in together so early in the relationship, but I could just barely afford the rent without another roommate, and her lease lapsed before she could find another place. After she slept in a tree outside the library one night, I invited her to move in, realizing it was ridiculous not to.

All U-Haul jokes aside, it sprung from a basic instinct—when our loved ones are in trouble, even if the danger is not immediate, it’s only natural to want to help. And that was my primary concern when, a year later, she turned to escort work in order to pay the bills.

I had been involved with a sex worker before, and had picked up the basics of what you do to keep yourself safe. So when she got her first gig, I knew that she would need someone to do security. I didn’t hesitate to volunteer myself.

To be clear, I made sure she knew that I wouldn’t let her starve. If she couldn’t pay her portion of the rent for a while, that would be fine. But she’s always been strong and values her independence. She refused to rely on my support when she had an available job in front of her— just as she insisted on paying me a fair rate for security work even though I told her I didn’t need it.

When I mention “doing security,” people tend to assume it’s a physical job; that you’re supposed to be big and intimidating—and ready to fight. It’s true that you need to be prepared for a physical confrontation, but throughout the year I did the job, I never even had to speak with a client.

Most of the job is about planning and being there. I helped set up the security protocol: Check-in phone calls, contingency plans, and when to call the police. With new clients, I drove her to the appointment and waited in the car the whole time she was there. If I could, I would park nearby and keep an eye on things in case they left or someone else showed up. If it was a hotel, I might go sit in a coffee shop across the street, always ready to respond immediately to a phone call.

The fact that I love her made it much easier to contemplate diving into a potentially dangerous situation—if she was in danger, I knew that I wouldn’t hesitate. Yet I knew that in most cases if something went wrong, the best thing I could do would be to call the police. My job was to be a security camera, a getaway driver, or if I really needed to, a can of mace. I was not and could not be a SWAT team.

It did help to look intimidating. And when clients only saw me inside a car across the street when I dropped her off, it wasn’t too hard to be dark and mysterious. I made the decision to try to pass as male. The type of person who would hurt a prostitute is likely to think of her as weak and worthless, and the female friend (possibly another whore) who gave her a ride would be viewed similarly.

I always wore bulky clothes, all black, and a hat or a hoodie to hide my hair, which was still long back then. It worked for being in the car across the street, but the servers at the coffee shop would always call me “Ma’am.”

Most of the time, things were relatively boring. I’d sit in the car contemplating escape routes and mentally preparing myself to respond should there be a crisis. Sometimes, I’d people-watch the folks walking through the neighborhood. Sometimes, I’d work on my writing to pass the time. One time, in the dead of night, I was startled by an extremely friendly cat that jumped on the hood of my car and meowed for my attention. I got out of the car to sit on the sidewalk and pet it for the rest of the hour.

She was always stressed on the ride there, hurrying to get that last bit of makeup on, worrying about being late, though we rarely ever were, or just being concerned about how things would turn out. My favorite part was when the call was over. She’d come out, get into the car, and as soon as we were out of sight of the client, we’d hug.

I’d feel the adrenaline leaving her body as she allowed herself to relax. The first few seconds of the hug would be for physical comfort and reassurance that it was over, the rest to regain a sense of our connection and get the chance to hold onto something real. That reaction was one of the first indicators that this line of employment was not ideal for her. Eventually she voiced that herself. That was when we began to look for alternative lines of work for her.

After our ritualistic hug, as we drove the rest of the way home I’d ask how things went. She’d nervously laugh when retelling an awkward incident, a bigoted comment, or an amusing anecdote. One time, she explained to me that the client was worried about her “and the dark, mysterious stranger who dropped her off and picked her up.” He wanted to save her from me, wished he could propose to her and get her out of this life. And without any sense of irony, less than half an hour later, he begged her to do bareback, complained about how expensive she was, and asked her to reduce her already incredibly low rates.

I laughed off the image of me as a pimp. She wasn’t about to disclose to him that the dark mysterious stranger was her girlfriend, nor point out that if she needed saving from anyone it would be guys like him. However, I later discovered that he wasn’t the only one who would label me with that image. What I was doing was legally considered pimping.

I knew that doing security could get me in trouble with the police, but I didn’t realize until after she’d stopped doing escort work that while prostitution is a misdemeanor, what I was doing was “promotion of prostitution,” the legal term for pimping, and it’s a felony. The law is written really broadly to cover “any conduct that institutes, aids, or facilitates an act or enterprise of prostitution.” Under that definition, even providing emotional support to a sex worker could be construed as a felony pimping by an overzealous District Attorney.

In fact, it was when she realized that I could be at risk—and knowing the abuses I’d be likely to face as a trans woman in prison—that she became determined to leave the profession. And almost exactly a year after she had begun escorting, she stopped. I know it was the right decision for her. But we were both resentful of the emotional blackmail the situation presented her with.

Even if I had known that I was risking arrest or prosecution, I wouldn’t have done anything differently. I would have continued doing security for her had she needed it. I thought briefly of the potential consequences I would face if something went down, but the consequences of not being there were unacceptable to me. She means the world to me, and any law that says you can’t wait by the phone and call the police when your loved ones are in danger is not a law worth following.
Tags:
Views: 1498
Related articles

Tobi
Longtime trans activist and writer, Tobi is co-chair of the board of COLAGE, a national organization uniting children, youth, and adults with LGBTQ parents.

She is dedicated to creating oppression-aware sex positive media of all kinds, and as a long time educator she is often patient to a fault.

Other articles by Tobi