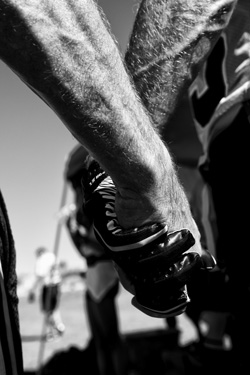 With Super Bowl XLV just scant hours away, the hopes and hearts and bets of NFL fans rest with the Pittsburgh Steelers and the Green Bay Packers. While many will be on the edge of their seats, waiting with Chee-toh'd fingers and brewski breath to vicariously live each play as the clock ticks down to the final outcome, the real winners of the sport may be in a totally different league.
Although many are talented athletes, NYGFL’s membership is hardly made up of Chelsea models and personal trainers. They’re every shape and size, from former NFL players to those like Shigeo Iwamiya, who show up at tryouts to have their football cherries summarily popped. Some people join and learn the game and the beauty of teamwork. Others learn patience.

Edmund Shockey, generally a first-round pick with a leadership role in defense, is no exception. “I’ve had to learn to temper my instructions in order to motivate rather than insult the newbies.” He admits that can be a tricky balance, but he’s learned far more as a Captain than he ever did as a player. “Games aren’t won on talent alone … everyone has a key position that must be executed for a drive to be successful.” The real challenge, he says, is to find ways to have people play to their strengths.

It has nothing to do with fashion, theater or home design, People. Can fairies get mean and dirty on the gridiron (in a manner entirely devoid of euphemism)? You bet your tight end they can.

The New York Warriors came up short in Phoenix this year, losing Gay Bowl X to the Los Angeles Motion by one gut-wrenching point. It was a crushing defeat for my newest local team (YOU’LL GET ’EM NEXT YEAR, WARRIORS!), but a profound victory for the National Gay Flag Football League (NGFFL) overall; a tenth season, a fast-growing roster of teams in cities across the nation—18 teams and counting.

The league assists new teams in their formation and encourages participation in locals all over North America. Upcoming events to watch for before Gay Bowl XI rolls into next year’s host city—Houston—include the Florida Sunshine Cup in Fort Lauderdale, the Desert Duel in Palm Springs and the Pride Bowl in Chicago. Visit NYGFFL.org for more information.

Not surprisingly, NYGFL’s roughly 300 players are very strong when it comes to charity and organize various fundraisers to help a number of organizations, including God’s Love We Deliver, which provides and delivers meals to HIV-positive people unable to prepare their own, and the Gay, Lesbian and Straight Education Network (GLSEN; pronounced “glisten”), which strives to develop K-12 school climates in which every student can be valued and respected regardless of sexual orientation or gender identity. Most recently, they raised $7,000 for these organizations via a Bachelor/Bachelorette Auction.

Nicole Ryan, a 25-year-old facility rate analyst, was among the leaguers with a date on the block. She calls the experience one of the best of her rookie season, though she wanted to refuse when approached. “I knew I’d be nervous, but I heard that the last [auction] was a really great time and that all proceeds were going toward two charities, so I went for it!”

The event was held at a local bar, with a DJ spinning the participants’ chosen songs as they strutted their stuff on the catwalk. Ryan’s nerves—soothed by a quick drink beforehand—gave her no trouble. Each “lot” answered a question before the bidding started. Ryan was requested to reveal a sexy secret. She chose to play up a recent football-related hand injury.

“Don’t let the fractured finger fool you, Ladies,” she teased. “It’s never a problem when it matters!” She followed it up with some theatrical tear-away sports pants and the crowd—male and female—ate it up. One lucky bidder spent $400 for a date.

Molly Lenore is proud of the league’s community work and is hopeful they’ll accomplish more despite her full-time job and role in several other local leagues. “I’m learning how to involve more people, to delegate,” she jokes. “I don’t want to be a roadblock. A number of different leagues around the country have done ‘It Gets Better’ videos. We’d like to do something for that.”

Gridiron legend Joe Namath once called football “an honest game … a game about sharing.” Beautiful sentiment. And kinda “gay,” of course, but then he did have a profound fondness for fur coats and famously wore pantyhose. All jokes aside, to date only three NFL players in the sport’s history have ever come out publicly. And even then, only after they’d retired their jerseys. NYGFL is, in many ways, the anti-NFL.

That’s not to say they don’t have fun with it. Shockey cites grossing out straight allies with graphic descriptions of man-on-man sex as particularly amusing, and one year Greenleaf’s teammates roasted him during Awards Night with the “Top 10 Gayest Things” he’d said over the season (the list included phrases he’d used in football strategy, such as “running long and running deep” and “pounding the A-hole”). However at its core, says Lenore, the league was built around community and empowering the players. Simply put, the league has changed people’s lives. 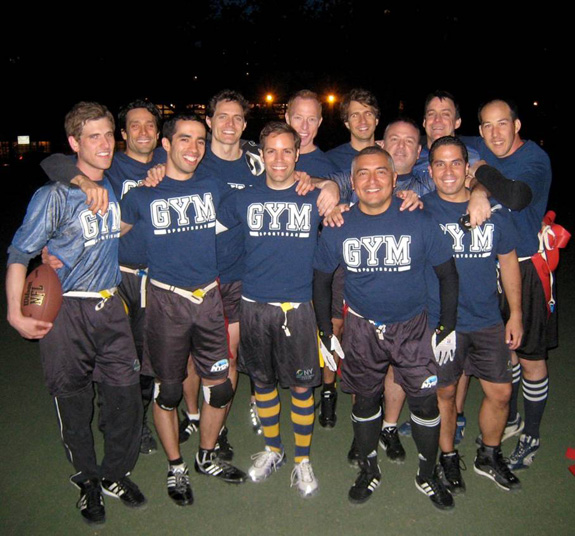 “Something that’s become clear over the years,” says Lenore, “is that a lot of gay men never really played team sports before. Especially football.” She believes there are things people learn in the proverbial huddle they can’t learn elsewhere. “You have an incredible amount of support here,” she stresses. “It’s not about how good you are. All that matters is your team and how you play together.”

Go to the Videotape

Seth Greenleaf is among the changed. So much so, that’s he’s making a film about the league, Flag Football: The Movie. After a few attempts at a screenplay, he says, he realized no characters he’d invent could tell its story better than the players, so it became a documentary. He says this makes him feel more the project’s protector than its creator. 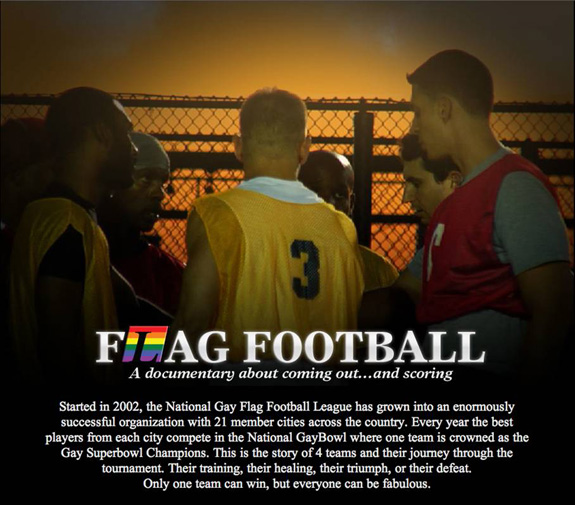 “I truly love this league,” he says. “It’s made me a more accepting, patient, compassionate man…. When I came in, I thought sports were about winning. The league taught me how much more important everything else was.” Even so, he thinks the fierce competition would be what surprises most people.

Having played in the straight football universe his entire life, it’s easy for him to note the differences. “In the sports I played growing up, there’s a lot of machismo, posturing and pecking orders…Most coaches are less interested in what makes someone tick than in beating them into line with everyone else. In some ways, it’s why straight men can work so well and so quickly together—but it’s also how they can work together for 10 years and know almost nothing about one another.”

The trailer for Flag Football: The Movie.

For the Love of the Game

In the gay league, so many personalities can lead to strife and frustration—especially for leaders who need to keep it all together—but it also leads to very deep friendships. “You’re watching adults learning things like teamwork and trust that normally come through team sports when you’re young, but because many of these guys felt shunned, intimidated, even threatened by the sports culture, they didn’t have the opportunities that guys like me take for granted.”

To be around people experiencing this very primal, natural need for sports and team bonding, he says, is nothing less than extraordinary. “It’s like an adult re-education program disguised as a football league.” Greenleaf learned how to win growing up, but never how to enjoy it or live in the moment. NYGFL, he says, teaches both.

“[Gay men] can be every bit as tough, talented and masculine as any straight man, but they can also be loving, emotional and vulnerable in a way that straight men struggle with.” He hopes more straight allies sign on. “They could learn a ton from these guys.” 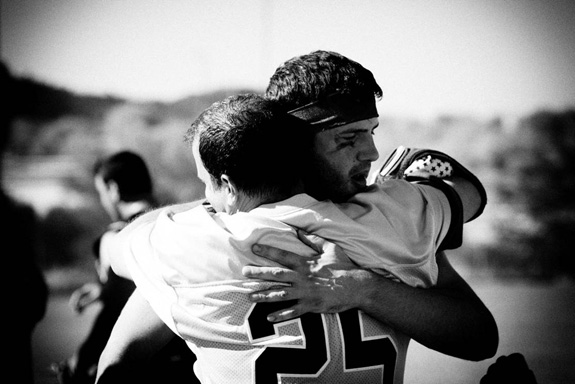 Shigeo Iwamiya is a poster boy for the movement. “This is someplace where I can belong and be myself,” he says, “I know at the end of the day it’s ‘just football,’ but to me it’s been so much more. It has changed me from shy and self-deprecating into a more outgoing, self-confident person.”

And so, with the spectacle of Super Bowl upon us—a television event whose audience is more than likely made up of 20 percent genuine fans and 80 percent beer-swilling commercial-watchers—it’s nice to know that genuine “love of game” still exists.

“The professionals get paid and are icons in our culture that border on freaks of nature,” says Shockey. “They presumably love the sport—or at least enjoy it—but grassroots is the act of creation. We form the league, elect leaders, spread the word, conduct the draft and design the plays.”

“Why a gay league?” so many people ask.

“Why not a gay league!” he fires back. And the idea has emerged from its chrysalis with wings.

“The vision for young gay people has widened to include football along with children, marriage and military service,” he says. “There’s something bigger afoot. Gay flag football is a good reflection of this cultural shift.” 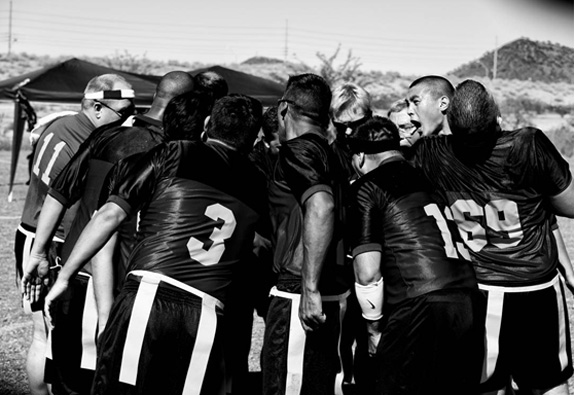 Part One of this article: Super Bowl Special: Football is So Gay, Part 1
Tags:
Views: 1210