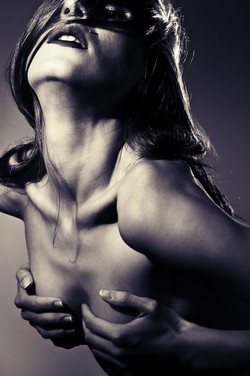 The Biker Dude With The Heart Of Gold

Drove way out in the country (45 minutes) to rendezvous with Biker Dude. He lives on a beautiful estate, a small house on a lake, lots of wooded acres. The property is large enough to warrant a golf cart to get around.

He showed me his two Harleys—one big, one regular. The regular sized one was red and chrome, and was customized with 18 women decorating the fenders, wheels, handles. He insisted I get on it so he could turn it on and I could feel the powerful vibration. Vroom!

Biker Dude rides with the Patriot Guard, a group of volunteers who escorts soldier funerals and shields the families from protestors. He also hunts deer and turkey with a bow and arrow and is such an expert mark, that the deer will sometimes walk a few feet and not even know they’ve been hit. When he found out I was vegetarian he got sheepish, but I told him I had way more respect for him than for all the folks who go to the store to buy their unrecognizable packages of meat.

He loved to eat pussy, so he got excited when I asked him to eat me out from behind. And he had a “big’un.” While I was giving him head, he said happily, “GOD, it’s so nice to have someone so pretty down there! You’re making my day, little lady!”

After we finished an enjoyable romp, we cuddled and he told me he was a Vietnam vet, and how embarrassing it was to have PTSD, jumping when a car backfired. He told me he came back from the war all kinds of angry, having seen some terrible things, and how he almost choked his stepdad to death for beating on everyone the way he did his whole life. (The stepdad beat his wife and kids with electric cords, belts, and shot at them.) After dear ol’ Dad finally got put in his place, he never did it again. Biker Dude swore off drinking and drugs in 1982, after pulling a gun on some smart ass on the highway.

After I left Biker Dude, I drove home and showered and changed quickly, heading for my date with the Persian doctor. Ever since I told him I was working with guys with foot fetishes (a half truth) he has been rarin’ to go, which is the opposite of what I expected. I thought he’d be horrified and not want to see me again, but it must’ve turned him on to know that I was working a sex job and other men were getting off on me. So all day he emailed me dirty things like how he wanted me to “suck his cook” and “blow his dick,” which made me giggle, but also roll my eyes a bit.

I arrived at his place and he took me immediately on the washing machine. After eating my ass and fucking me (it felt strange to be with someone who had a sculpted, muscular body), he made us dinner and drinks and we had our usual intelligent conversation, then went to bed for more fucking. I’m a trooper.

In the morning, he woke up early to go to work, and I left too. Driving home at 7 a.m., I got a phone call. It was the Werewolf who took me to Vegas. He wanted to stop by on his way home from gambling all night.

I got home and showered. He let himself in, and walked into the bathroom, all prowly and smiling at me in my towel. I feigned annoyance at his brazenness and said, “Do you mind?!” as I flounced about and got dressed.

We lay on the bed together. The tension between us was achingly delicious. With my head resting on his chest and his hands stroking me, he told me how upset he was with me, told me quietly how he was angry with me for taking the path of prostitution and rejecting his kept woman offer. We talked about things, and it was only a matter of time before he shifted from pensive to Werewolf.

Suddenly his breathing changed, got ragged and shallow. He kept going to kiss me, but would stop short and just stare into my eyes. He started pawing on me, and I submitted to his fierce desire. He shed his button down shirt, shoes, jeans, but kept his wife beater on. He looked ferocious in his intensity, the wild look in his eyes, his unruly hair. I kept not looking up at him cuz it was so intense, but then would peek, and would see his chest in my face, all the hair so animalistic. He frantically stripped me and pushed his way into me, and fucked me hard. He kept growling, “Fuck! FUCK!” and then exploded inside me.

I don’t know what that was all about—if we’re grooving on being so forbidden or what—but he’s the one guy that’s doing it for me.

That night, I had a date with movie theater manager, and was subjected to more punishing, aggressive sex that was made worse by our lack of chemistry. UGH! I spent the night with him, then left early to spend a day hanging out with different people, including the cop.

I spent the next afternoon fucking the cop—he’s so sexy and good, a big, muscular, dark-skinned African-American man with a deep voice—but I’m not giving him what he deserves. He has no idea how fucked OUT I am, he just thinks I’m a baby for only being able to fuck for two hours.
Tags:
Views: 1012
Related articles