by countrycutie, edited by Kindred Published: May 22, 2013 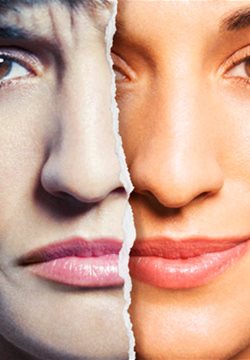 http://www.cnn.com/2011/HEALTH/03/07/US.highest.bipolar.rates/index.html
I am diagnosed Bipolar II and my medication, like most antipsychotics, has caused me to lose my sex drive. This article is about my experience and how I handle the lack of desire with my live in boyfriend.

About 6 months ago, my boyfriend of the time broke up with me. He knew my diagnosis: Bipolar II. Untreated. He told me I was just too much and he couldn't handle my moods anymore. With tears in his eyes, he urged me to seek help and walked out of my life. I was heartbroken.

After a few weeks of the countrycutie pity party, I started to look back on our relationship. To my horror, I saw that he was right. Many of our arguments could have been avoided if I could have kept a level head, but I could not. My illness controlled my emotions and I could not, no matter how hard I tried, ignore them.

I called up a few local psychiatrists and scheduled my first appointment.

After a rough road of finding a doctor that I agreed with, I settled in with my current doctor. I appreciated his desire to medicate me temporarily while teaching me mindfulness and then wean me off the medication. That was exactly what I wanted.

Things were going great. I was medicated. I was keeping my cool a little bit better. I was seeing a therapist weekly. I was definitely on the upswing.

Then I ran into my high school sweetheart. We started talking again and one thing led to another. I started falling for him all over again and I knew my time of being a single lady was over. I entered into the relationship ecstatic. I felt like a changed woman and thought this time I would be able to handle a relationship.

Wait! We have to have sex?!

I'm hypomanic. Dictionary.com defines hypomania as "an abnormality of mood resembling mania but of lesser intensity."

That's right. High sex drive. My sex drive used to be insatiable. I could go all day. I had multiple fuck buddies in waiting just in case I needed sex and my go-to fuck buddy wasn't available.

My high school sweetheart knew me as a girl with an extremely high sex drive, but with my medication, my sex drive is zero. I don't mean that I rarely want sex. I mean I NEVER want sex. He touches me and I feel nothing. He tries to rile me up and doesn't get a stir.

This didn't phase me at first, but after turning him down quite a few times I realized it. Oh shit. I seriously don't want sex. How can I keep this man?

I suppose once I go off my medication in a few years, my sex drive will return, but I definitely can't wait until then. He'll be long gone. For now, my solution is to do my best to picture every sexual fantasy and situation to try to get myself in the mood. At first, when he touches me, I don't want it, but if I work hard enough to get in the mindset, I can get into it. Nothing like I used to, but I do it for him. I do it because I know this me that doesn't want sex is a medicated version.

I don't doubt for a second that the medication is the right solution for me right now. It's helping me be more stable so that I can work, maintain relationships and function in society, but I can't wait until I get my sex drive back.
Tags:
Views: 2727
Related articles

countrycutie
I am a young working professional living life in the beautiful bay area. Just another college grad trying to find her way in life and that tricky balance of work and play.

In my free time I enjoy yoga, reading, cooking, hiking, spending time with my dog and going out with friends.