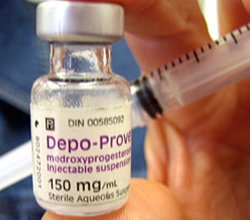 http://www.islandsexualhealth.org/birthcontrol/depo-provera/
This is the fifth installment of my Contraceptive Series, in which I will provide accessible information about Depo-Provera, the only injectable option available in America at this time. This article will provide information about the basics of Depo-Provera— everything you need to know when making a decision about what contraceptive is best for you.

Depo-Provera is a shot of progestin that releases over a period of 3 months to prevent pregnancy. It took a long time to get it on the market because many were fearful of health effects. It finally was approved in the United States in 1992 after almost 20 years of attempts. In 2005 a lower dose version, Depo-SubQ Provera, became available.

Every 3 months, the user must go to a provider and receive the shot either in her arm or butt. I got it in my arm for two years, and it felt similar to the HPV vaccine. It should be noted that bone loss is a side effect of Depo-Provera and that the FDA does not recommend that it be used for longer than 2 consecutive years, though other health organizations say that as long as vitamin D and calcium are supplemented, the user will be fine.

So how does it work?

Depo-Provera contains 150 mg of progestin in each shot, which is a very large amount of progestin. It is over 99% effective. It works just like other hormonal birth controls by thickening the cervical mucus to inhibit sperm movement and helping to suppress menstruation. Because of the 3-month, consistent releasing of hormones, most women experience a different type of bleeding than they normally do. It has a greater actual effectiveness rate than the Pill, just like all other long-term options, because there is much less risk of failed use. Once the shot is administered, it is effective for 3 months. As long as you get the shot in the two-week window your provider will give you, you will be protected.

Who should use Depo-Provera? Who shouldn’t?

As with every birth control option, Depo-Provera is not right for everyone. Some people who are attracted to Depo-Provera are young people and college students because of how private, simple, and easy it is to use. It is less of a commitment than an IUD, and also has a cheaper upfront cost than other long-term methods for those without health insurance. However, there is more to consider than just these factors, which I will cover more in the next section.

People who should consider Depo-Provera: women who want a long-term option but are uncomfortable with devices inserted into their body, young women, women who do not want combination methods that contain estrogen, women with heavy periods or bad cramps looking to suppress menstruation, women who want a hormonal option.

What happens once I get it?

Depo-Provera, like other hormonal contraception, comes with a lot of side effects. Many of these are similar to the Pill, like moodiness and headaches. However, it also comes with a slew of its own, including potential bone loss, particularly for young women, and sometimes incredibly irregular bleeding. After two years on Depo-Provera, I was still bleeding for my entire 3rd month. I would get the shot, be totally free of bleeding for 2 months, and it never failed, I bled the entire final month of the shot. As soon as I got my new shot, it would stop. It wasn’t heavy, but it definitely affected me. I was young, though, and at one point without health insurance, and away at college, so I felt as though I had few options. Depo-Provera is definitely attractive to women in those situations.

Depo-Provera also is associated with weight gain. I personally did not gain weight on Depo-Provera, or at least nothing noticeable for someone who was between 17-19 years old, but most users do report this side effect. The average weight gain is 5 pounds in the first year, 8 after two years, and 13.8 after three years of use. It is unknown why some gain weight and others do not or who is more at risk for this side effect, but studies show that it is a gain of fat, not simply the retaining of fluids.

Another commonly cited problem is that women who take Depo-Provera cannot immediately become pregnant upon discontinuation of use. Some women do not have this problem at all, but others may be essentially infertile for a few months, few weeks, or however long depending on their individual experience. This is not a concern for many people, but women who are in the process of planning families and simply want to space out children may want to consider another option. In comparison, IUDs, once removed, will immediately render the body fertile.

Next time, I will write about NuvaRing, the vaginal ring. If you have questions about Depo-Provera that I did not answer here, please ask in the comments below or send me a message!
Tags:
Views: 1392