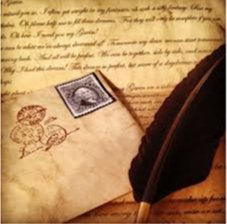 http://www.tumblr.com/tagged/vintage-letter
When I was still a teen, I think around 14 or 15, I red a book series where the main character girl would write letters to her older self, to be opened and red ten years later. I liked the idea and decided to follow her suit and started writing for myself. Here I would like to share same excerpts with you that have any relevance to sexuality.

So I started writing...

I was always extremely excited when I closed the envelopes and stashed away the letters for future, wishing the older me could reply to them. I always put my views of the world into it, my fears and hopes. I wrote the letters on my birthdays, always before reading the letter from five years prior to remain uninfluenced.

Why I thought I would share excerpts? I know there is such a thing as letter secrecy, but being both the recipient and writer of these, I decided I could share if I consented. I found it interesting and probably useful to see how my focus changed during the years, how things became important or less important, and how my own views of the world developed and the influence of my parents wore off. So here they come!

Letter from the 15-year old me:

"...and I honestly wonder, dear older-me, how you are. I hope you grew up into a nice woman, without changing too much.

Did you kiss anyone? Wow, I sure hope you must have! I wish you could tell me how it went, and give me some tips. Do you have a boyfriend? Is he cute? Is he religious? I wish I could see him, meet him! Does he look anything like we-know-who? <3 Or maybe like Snape. Be nice and careful, and don’t do anything bad! Ok, not too bad...

...I hope you are not smoking. That would be just bad. If you are, promise me to stop it. OK? No more cigarettes. If no, good going! I hope you are not dyeing your hair! Or painting your nails or using mascara! If you do, you should stop it. And do not wear too high heels either...”

A little explanation of "We-know-who": I had a serious crush on a history teacher. I was very well aware it was nothing more than a crush, and it had no hope either in the present or the future, and nothing ever happened, but it still made my young insides melt when he came into the classroom. I especially loved his personality but his looks also influenced my preferences in the years to come. Also I was a big Harry Potter fan and loved (still do) Professor Snape.

I guess you can all see how "my" views were pretty much just a reflection of what my parents thought and repeated regularly. Our family was pretty religious and quite strict. I did not get to socialize a lot, which later was a huge drawback and caused some pretty big difficulties in making friends and getting a boyfriend. I was over twenty when I got my first kiss! I only started to develop my own views and ideas once I got away from home to go to university.
I wish I could tell 15-year-old me not to be such a good girl, to be more mutinous, braver, stand up for herself and be a real teenager.

Letter from the 20-year old me:

"...What I am still most unsatisfied with is (the lack of) my sex life. I really hope you already got things rolling, and I wish you could tell me that yes, do not worry you will find that guy, and give me some tips on where to go at what time and what to wear. By now, I should have had a boyfriend kind of. Not because that’s what everyone says and thinks I should have done, but because I am both lonely, and curious. I want to know what it feels like being held, going home to someone, being wanted. I want to know what kissing someone I love feels like. (I checked out some video guides on the topic to be sure.) Heck, I want to know what being in love feels like! That warm tingling everyone talks about. The yearning. I was hoping at the uni I would find someone, but all my mates seem to be idiots more interested in drinking, partying. The only one I like (again) is that cute teacher, Finn, but again it is a hopeless case. Plus can’t really see going home with him. “Hi mum, dad, that’s Finn, my teacher and boyfriend. Manfriend. Whatever. Yup, he is older than dad, but only by two years. He is actually younger than you mum.” So I need to look a bit further, cause here there isn’t a serious guy, especially not one that would look good too. Preferably closer to my age. And never even let me start on religious...”

"...I found that watching porn can be fun, and a real turn on. It can make me wet in no time- but I am uncertain about my preferences. For some reason forced videos turn me on the most, especially if there are ropes/cuffs/some other tying up involved. I do not understand why I like it. It is not like I would want to do it at all. I definitely do not want to be raped, beaten, or held at knife point. I keep deleting my browsing history, even though no one is supposed to be able to see it. I do not know if you still have this strange taste. I kind of hope you do not. Maybe you grew out of it. It would be easier I guess. I try not to look at those too much, but once I stumbled on it, normal videos just aren’t enough."

"...I am kind of torn about it all, uncertain about how ok it is from the point of view of sin or no sin. Vicars are pretty ridged on the topic and all against it, but I can’t imagine something that is both healthy and feels good could be forbidden by someone who is supposed to love us all...”

These extract show that I have started developing my own tastes and preferences, but I sill have a very strong influence from my parents. I was trying to find a guy that would fit both of our expectations (no wonder I was unsuccessful.) I was both very naïve and inexperienced at the time, though I wasn’t aware of that. I was starting to discover my attraction to older guys, and struggling against it to please my parents. With getting a free range of internet access, I discovered porn of course, and my liking of more spicy things than vanilla. It took me about a year to understand why I liked what I liked, and realize that according to statistics every woman has rape fantasies in one form or another (mostly the guilt-free version of "I’m being ravished by someone I really like and want but should not have sex with"). Also I had some really serious doubts.

When I read it, I wished I could have answered some of my own questions, and helped myself accept and embrace my own tastes and preferences, and point a guiding finger towards vanilla-BDSM (or being peachy as I often call it, vanilla with a droplet of red kink) I actually got my first boyfriend about a year after I wrote this. He wasn’t the perfect guy, and had to look a bit more to find my current partner, who makes me happy in nearly everything.

"...I cannot tell you how happy I was when I realized I was in love, finally, and with someone actually available. I bet we will never forget the excitement of the first date, how extremely nervous we were, nearly to the point of feeling sick. I think I was more afraid to place my hand on his knee than I was when I told my parents about getting an F.”

"...And I learned how much breaking up hurts, and how long it takes to heal even minor wounds of the heart. Now I understand some of the mistakes I saw others doing around me, and why they did them. Actually some of them looked like pretty good options at certain times, like when Johan left me. But I guess love comes with pain too. Hope you are right now happy and still with someone, would hate if you were going through that pain again. Right now I am still with Bobby, and I hope he still hangs in there and I won't think in retrospect what an idiot I was to date him! Like think now about Johan. Because, right now, I am very much in love.”

"...But it was all worth it, because now I know what kissing feels like (though I suppose you still can recall how the first kiss felt exactly like a tongue in my mouth). Guess what: my parents weren’t thrilled. And I did not care. I was (am) just happy! Now I know what a penis feels like in my hand. What it is like to be hugged and wanted. I know what it feels like to be in love!”

"...What I discovered is there is good sex, and better sex, and even better one, and it takes work on both parts to make things better. It also takes some research, a lot of trial and error, and good, good communication. While I learned a lot and came a long way, I am not naïve enough to think I know all. I suppose a lot more is to come, and I hope I will be an attentive student when they get here.”

"...Finally I wanted to say, that by the time you read this, I know you will be 30, which right now sounds kind of...old. I never imagined myself that old – but you know, if you can go on the way of reaching our goals, settling down, maybe even start a family, you should not mind it. I would not. I would like to take a sneak-peak into our future and see how well you’re doing. Because if you have found someone (be it Bobby or not) who loves you enough and is reliable enough to get married with, you must be even happier than I am now. And the road there might be rocky, but not a bad journey altogether. So never mind those extra five years. Thirty is still very young, and beautiful! Even if you are not there yet, time spent searching for happiness is never a waste.”

It pretty much still resonates my current ideas, though I am less certain if I can get there by the time I’m thirty.
Hope dies last though!
Tags:
Views: 1338