My Journey of Self Discovery 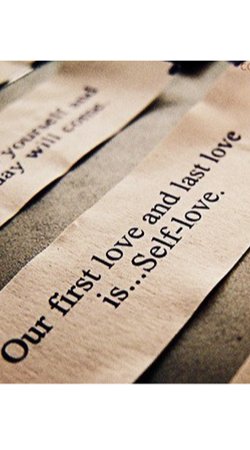 http://drlarafernandez.com/self-love/
I've always been awkward, a prisoner only to my own anxieties and fears. I don't have legitimate fear of harm, but I fear what people might think of me.

"Spending time looking for what is missing in your life is futile; if you fail to look within yourself. When we challenge everything we believe we are, we reveal that which we never knew about our own selves."

I've always been a little awkward, afraid of everything. I always thought that the things in my mind were dirty and that the feelings I had were bad. I was made to believe that I was crazy and that no one would ever understand me or love me for me. I realize now that it was all an illusion. The only one I was running from was myself.

It all started the year before high school. I had a new love, or so I thought. I bent over backwards for him, and ignored my own wants and desires to make him happy. I didn't do it because he made me happy, but because I thought that he was better than me and that I was undeserving and unwanted. He cut me down daily and told me I was nothing. I was ugly, fat or stupid. I didn't stand up for myself, but instead changed myself into who, I thought, he wanted me to be. I was miserable, his presence scared me and yet I craved it. His constant criticism left me confused of who I was, but I let it continue. We separated and I moved back home with my mom and her husband to get away from a very toxic relationship. I was home and set to start a new life - a life that a teenager should live, or so I thought.

Before my first relationship the year before, I was completely innocent. I was sweet and open and I was a virgin to both sex and hurt. I didn't know how much I had been changed, but other people could see it. I started out the new year by meeting the people in my neighborhood. Mostly boys, but that was how I liked it. I didn't feel like I was pretty enough to hang out with girls my age, so instead I hung out with the guys. We climbed trees and rode bikes, and soon enough, they started hitting on me. Obviously I was uncomfortable, but I never said anything. The things they said to me and the way they treated me made me feel alive and beautiful. I craved the attention and let myself become an object. Teasing just to hear them lust for me. Degrading myself to feel worthy.

Throughout high school, I had many boyfriends. I was always chasing the one I couldn't have, but now that I look back I realize that I could have them. They were the ones who would have treated me well, but maybe I was afraid of that. My relationships were still as unhealthy as the one that started them all, and I became consumed. It started off as innocently flirting and soon I was uncontrollable. I was drinking and partying heavily every night, I was embarrassing myself by becoming the center of attention, and the girls could all see what a mess I was. The guys? They didn't care much because I was their target. Once again I had become, what I thought, I was good enough to be. A drunk, pushing myself on whoever thought I was pretty.

I had my first child recently, and my life has changed for the better. I'd love to say he single handedly changed me, but he didn't. It took my family falling apart to discover myself. His dad and I have had our rough times and we always worked through them, but things were different between us. We were distant, sleeping in separate rooms and ignoring each other completely. I couldn't take it anymore, I was crippled by it, so we tried something drastic.

Are you ready for this?

It's amazing what sex can do. I'm not through with my journey, but I'm closer than I was yesterday.
Tags:
Views: 1298
Related articles

Other articles by Jamesey