The Dichotomy of Me 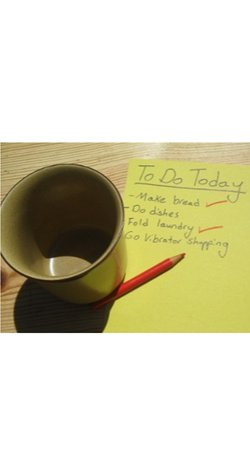 My daily and bedroom personalities don't match. What does that say about me? Does it say anything at all?
Sometimes I feel like I'm multiple people living in the same body. In most of my life, I'm a conservative, straight laced, right leaning woman. I am a wife. I am a mother. My idea of a good time is a cup of tea and a good book. I don't tend to wear revealing clothing, sneakers and flip flops are my favorite footwear, and I believe that pearls go with everything. And yet, sometimes when I get into the bedroom, I want to do something crazy...well, crazy by comparison to the rest of my very quiet, comfortable life.

Once upon a time I thought there was something dirty and yet exciting about sex toys and sex in general. I eventually became open to them when my sister, the wild one in the family, introduced me to the idea of vibrators. From that point on I had a love/hate relationship with sex toys and my own sexuality. I eventually became fine with the idea of sex toys, but when my husband introduced me to any new idea for the bedroom, I generally balked. Anything out of the ordinary was scary, and required, at least, some thought. Worse, if he sprung an idea on me spontaneously, I pulled back into myself and wanted nothing to do with his request, no matter how vanilla it was.

As I got older, I started to be more open to different ideas. I was able to listen to suggestions that my husband had without fear or judgment, and learned to express to him what I wanted and needed. I was on my way to understanding myself.

Part of understanding myself, of course, was knowing what I liked. I always thought that sex was supposed to be like it was in the movies. One partner on top, one on the bottom, moving together, feels good, simultaneous orgasm, and then falling into bed for a cuddle with the woman's head on the man's chest. Depending on the age of the movie, there may be cigarettes involved. Though I thoroughly enjoyed this type of sex, I found that there were other kinds of sex that I enjoyed just as much. The more comfortable I became with my sexuality, the more I wanted to try in the bedroom. This realization was both thrilling and frightening, and it did not seem to mesh with conservative side of me.

It seemed that I craved variety and spontaneity, but only in the bedroom. In the rest of my life, any variation in my routine, no matter how small, was likely to give me an anxiety attack. Everything had to be just so. But once the kids were in bed and the lights were low, I found I wanted to try anything and everything, even if it was only once. Then I started to ponder what that meant. What does it mean when I am ever-so-conservative in most of my life, but come untied at the end of the day? What would other people think if they saw my toy box or knew some of the things that my husband and I talked about? Am I broken? Is there some disconnect? What does it all mean? Do I have two separate people living in my mind, one the upstanding mommy figure that most people see and then the crazy one that takes over after 8pm?

It was a long time pondering these questions before I realized a very hard and inescapable truth: it doesn't mean anything. Not one thing. Who made the rule that you must act the exact same way in all areas of your life? That quirks or contradictions in the same person don't exist? The fact is that if I like fish, that doesn't mean that I don't or can't like chicken. One does not necessarily relate to the other. My sex life and my outside life don't necessarily match up on many days, and it's only recently that I've come to understand that it's OK. There isn't anything wrong with me. They are just two sides that make up who I am, and who my husband and I are together.

One night, I sat with my husband and sighed, “I think we've tried everything there is to try.”

He looked at me and raised his eyebrows.

Good. Because in this area, this one segment of my life, boredom is just not an option.
Tags:
Views: 1643
Related articles