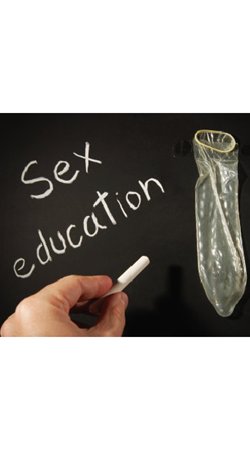 http://safeinbk.com
What limited sexual education communicates to our children.
Ah... abstinence only Sex Ed. Some of you may have had it. Some of you may have had more comprehensive Sex Ed. Others might have had a very conservative course, a religiously themed course, or anything in between. Regardless, there is a wide spectrum of material you may or may not have learned. And in this inconsistency is an issue.

The U.S. is up in the air regarding sex education, especially in their laws. Each state has different laws and regulations regarding the subjects and treatment of all topics sexual. However, there tends to be a trend: more conservative states tend to have more abstinence only education and have a higher chance of having a secular education. In the heat of this, we have two camps: those who want comprehensive sexual education that includes abstinence but other forms of contraception, and those who want abstinence only education with little to no mentions of contraception.

Where does that leave us, and more importantly, our youth?

Many are left uninformed or even misinformed. Right now, the U.S. is pumping out dollars for abstinence only sexual education. It went down a bit with the Obama administration, but congress still gives about 50 million dollars to abstinence only Sex Ed.

It's one (still horrible) thing to leave a teenager in the dark, but it's another to use scare tactics to make them obey you. Other tactics can bruise a woman's self-esteem and objectify them as just a vagina. And less noted, but still true: abstinence only education can dehumanize males and treat them like they have no control over their desires.

This is just a sample of medically and scientifically incorrect 'facts' told in some Sex Ed classrooms (not all granted, but this should not happen, at all). Maybe that is the reason various medical and scientific groups are opposed to abstinence only Sex Ed. Oh, and let's not forget lying by omission either. One common example is that males only see the male anatomy and females only see female anatomy in some Sex Ed programs. Sad but true, this could be contributing to the idea that women pee out of their vaginas.

In other abstinence programs there is a deliberate omission of the clitoris as well. This is just some of the misinformation out there with these programs, but many go deeper and try to use psychological means to control youngsters.

Women are often objectified by their vaginas. Ever been a part of the "simulation" of what it is like to have sex before marriage? There are many versions out there, but they tend to have the same idea. Every time you have sex, you lose some of yourself or your worth. You could be given candy, water, dyes, or more. Oddly, many of these displays have to do with food. Regardless, all the girls are given a certain amount of candies. And every time they "have sex," they have to give a piece of their candy to the boy. Usually it is a girl who holds the candies, water, etc. too.

That alone can have many impacts on a developing girl. Is she the equivalent to a candy? Just a food to be desired and then finished? Why does she only have a set number of candies? What does it mean to have all of your candies or none at all? And why is she giving candies to a boy and saving them only for boys? If we say the exchange of candy is sex, why can't she have sex for herself because she wants to? Pleasure is not one way (and it shouldn't be). What message is a girl left with after this?

Many of these exercises say women are just used for sex and once they have sex, they have nothing left or are worthless. Brains don't matter. Career, athleticism, or ambitions don't matter. The number of times you have sex determines your worth in these exercises. We're back to the old days of women only being prized for their purity. We are beyond this now. It sets women back, and it doesn't help that many of these programs accept a male's "devious" behavior.

If you have a vagina, you may have been told that is was something to protect and cherish from the machinations of men. Even your father may have told you this while you waited for your dates to show. It's the idea that boys and men are single-minded and that they only want one thing at that age: sex. They will do anything to get it. That is not limited to lying and manipulations. The boy doesn't "love" you he just wants you to sleep with him. To take your candy, if you will. While there are sleazy guys like this, not all men are crazed, out of control sex fiends.

Worst of all, we should not be transmitting this message to boys. It's almost as if saying they are not responsible for their actions. Telling boys that they are hormonal, out of control, and can't help it makes it a self-fulfilling prophecy. Telling boys they are just a mix of primal urges can just give them an excuse to behave in an inappropriate way. A boy may even generally care for his sweetheart, but because girls are trained that they are evil, girls have to be wary.

Yes, we have to protect girls, but dehumanizing boys and making girls responsible for their actions is disastrous for a society. We need to protect both boys and girls from misinformation and show that sex is equal for both partners. Yes, girls will want sex as much as boys. They should know that girls could be just as forceful as boys with wanting sex. Both sexes should also know the line between accepted and unaccepted behaviors. Double standards and misinformation isn't going to cut it.

Men, are you sex crazed animals?

Ladies, are you more than a vagina?
Tags:
Views: 2012
Related articles