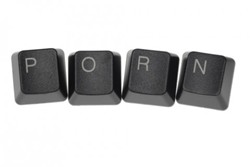 Not that it died out completely.

After all, the ancient Greeks and Romans had sculptures and frescoes in public areas showing things like oral sex and sometimes threesomes, foursomes and moresomes. Plus, they weren't necessarily shy about showing homosexual sex as well as heterosexual sex. The Japanese had erotic woodblock prints, drawings, paintings and other media with sexual imagery going back to at least the 11th century and even having a lot of popularity from the 16th to 18th centuries, when the art was often referred to as “Shunga,” despite a ban on such materials that was laid down in the mid-1600s. India is famous form having made the Kama Sutra available in the second century, and that’s a book that’s as much erotica as it is a sex-ed and relationship manual.

But certainly, unlike the cave-folk, it wasn’t there in the home or just down the cavern tunnel a bit.

There is a history of men and women even in prudish times getting their visual imagery in private through postcard-sized drawings of sexual situations, through novels, from photos, via paintings, from sculptures and more. The early- and mid-1900s saw the rise of “stag films” that men would gather to watch. In the 1960s and 1970s, we started to see the ability of people to see such movies in theaters instead of cramming into someone’s smoke-filled and booze-scented living room or basement.

Certainly, that was my own experience. My mom almost always had copies of Playboy and Penthouse in a cabinet in her bedroom, as well as a small bookshelf full of books like Emmanuelle and The Story of O—all of which I perused, got excited to and often jacked off to. When I hit 16 or 17, I would buy my own copies of nudie magazines at times, though after a few successful early attempts to do that at bookstores, I finally got asked for ID once and I panicked. I stammered something about having left it at home, fled the store and didn't try that again until I was 18 and really was legally able to purchase it. That was also a point at which I could go to the adult section of the local video rental stores and stock up on stuff to watch when I had the house to myself.

If anything, I might argue that it’s better this way, with the Internet making it almost impossible to hide the smut.

Like I said, I think it’s better now that it’s easy to find. That doesn't mean I want my 7-year-old child viewing it, but when her time comes to begin maturing, I’m glad she won’t have to sneak around and go through huge hoops to see what she wants or needs to.

My mom wasn't a prude. I mean, obviously…she owned erotica herself. But she wasn't shy about telling me what sex was. She didn't leave me ignorant. In fact, she gave me a great book written for teens to explain sexual maturation and sexual issues, as well as giving me “The Talk” a couple times to make sure I understood both the pleasures and risks of sex.