Your Cheatin’ Heart … Or Is It? 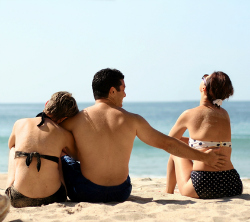 Galina Barskaya/Shutterstock
Life is lived almost exclusively in the gray zone. Things are rarely completely black or white, right or wrong, good or bad. Yet despite the very obvious fact that almost nothing is absolute and “morality” is often very much in the eye of the beholder, there is a very strong tradition of looking askance at “extracurricular” sex by married folks or other heavily committed couples.

Monogamy is considered the rule. The gold standard. The “right” way to go.
What is so interesting, of course, is that the act of extramarital sex (and I’ll keep using that term, but I’m really talking about committed relationships between a pair of people in general, with or without the wedding rings) is so common. Exact figures are hard to come by, because people don’t want to admit to it. A 2004 survey in the United States ended up concluding that 16 percent of married partners have had extramarital sex, while Alfred Kinsey found in his mid-20th century studies that 50 percent of American men and 26 percent of American women had engaged in extramarital sex. Other studies have tended to hover somewhere in between.

I mean, this isn’t like other hot-button topics. We can pretty much agree—in overwhelming numbers—that having sex with children is wrong, for example. That it’s a horrid form of rape and a cruel form of abuse. It’s also rare—with estimates that 4 or 5 percent of men would fit the criteria of being a pedophile. Extramarital sex is anything but rare.

Getting worked up about pedophilia makes sense. Almost never is there any true consent on the part of the minor, and most people don’t engage in the act of doing that to kids. So, it’s deviant. It strays from the norm.

But to get all in a tizzy about how reprehensible extramarital sex is when it seems like at least one out of every five married adults—and probably way higher rates among unmarried couples who stray—are doing it.

That’s something that speaks of a fairly normal behavior.

I’m not about to argue that monogamy is a myth. I’m not saying it’s unachievable. I’m not saying that it’s the natural evolutionary mode for humans to stray when it comes to sex even when they are in long-term committed relationships.

Any or all of those things might be true. But they also might not. Honestly, the truth probably lies somewhere in the middle. I think monogamy works for a lot of people. Whether it should be the default mode or whether that’s a societal thing foisted on us that holds us back—hell, I don’t know. But monogamy is real and it’s valuable.

However, so too is non-monogamy.

And that’s what I really want to talk about: infidelity vs. non-monogamy. Because they aren’t the same. They are related. But they aren’t twins. Siblings maybe. Or cousins. But they aren’t synonymous. And sometimes, I think, what we see as infidelity may not be so cut-and-dried as such. Just as assault can be justified in self-defense, so too can the choice to stray sexually, even without the permission of your partner.

Non-monogamy is something I’ve discussed before and others here at EdenFantasys and SexIs have talked about, in its many forms. But I’m not here today to promote non-monogamy as a lifestyle nor to explain its pros and cons all that much. Sure, I have an open marriage now (mostly in theory rather than practice) and that only happened in the past couple years, but my experience with non-monogamy goes back more than 15 years with my wife, so I know a thing or two about what is infidelity and what isn’t.

I wasn’t the only object of desire when I proposed to my wife and when we got married. There was another man in whom she had great interest. She choose me over him when I knelt with ring in hand, but she never really pushed him away. He remained an object of desire for her and a sore spot for me. There were discussions and arguments about it. I accused her once of “loving me but being IN love with him”—I’m not sure what that means, but it sounded good at the time and still does in an absurd way. Eventually I told her that if she needed to fuck him at times to “get it out of her system,” just go ahead and do it, but come back home to me and don’t dare fuck him in our bed unless you want him beaten and dumped on the front porch by me.

Not exactly what one would call an open marriage or even a healthy and resolved situation.

Still, had she decided to have sex with him, I don’t see that it would qualify as infidelity. As dysfunctional a form of non-monogamy as it might have been—however unreasonable or silly my “rules” may have been in this context—it was still something I agreed to. I acknowledged that shit might happen and that I would deal with any extramarital sex even if I wasn’t going to like it.

You see, you can’t be unfaithful if you have permission. It’s not cheating, really, if the other person knows you’re doing it and doesn’t demand you stop. If a teacher sees me copying answers and doesn’t fail me, punish me or demand I stop, then it isn’t cheating. There is tacit acceptance of what I am doing. Not approval, necessarily, but acceptance.

This doesn’t make an awkward, one-way, grudging form of non-monogamy healthy or good, of course. Non-monogamy, like any other relationship structure, can be awful for one or both parties (even committed monogamy can be terrible, as many faithful and abused spouses can attest).

What it comes down to is the fact that failing to remain monogamous is a pretty normal thing. Whether it’s infidelity/cheating or a non-monogamous arrangement depends on whether your partner knows about it and tries to put a stop to it or not.

I know this might seem like semantics, but it isn’t in my opinion. We are too quick to demonize people who step out simply because they had sex with someone else, without considering the larger picture.

When we tell our friend, Pat, “I can’t believe Chris cheated on you! How horrible!”…well, the fact is we might not know the whole story. Pat (yes, I’m trying to be gender neutral on the names on purpose) may not have been a victim of a callous Chris, no matter how much Pat might want to paint it as such.

What if Pat hadn’t had sex with Chris in months? Perhaps years? Doesn’t Chris have some right to say, “Enough is enough. We have something worthwhile in this relationship, but if you won’t give me what I need on the sexual front, I’m going to find someone who will” at some point? Even if Pat has some physical condition that makes traditional sexual intercourse impractical, painful or otherwise too much to do, aren’t there other creative ways to coax an orgasm from Chris? Isn’t there an implied contract in a committed relationship that you will see to each other’s pleasure and satisfaction?

Also, as I’ve mentioned in other recent columns, kinks and fetishes can be a cause of stress in relationships when they aren’t shared. If one partner cannot get into the kink of the other or satisfy it in some way, but neither wants to leave the other, is it infidelity on your part when the one person knows you have an itch they can’t scratch and that you really feel you can’t avoid scratching?

These are just two examples, but once again, we get into that gray zone. The place where probably 99 percent or more of us live. I don’t know many absolute angels or total devils in life.

Now, if I simply choose to go find another sexual partner, without any kind of serious provocation on your part…without talking to you first about sexual needs that I have…without at least telling you I’m going to do it…then it’s infidelity generally speaking. If I’m sneaking or I’m doing it for no good reason other than I can—or I don’t care about your feelings—that’s usually cheating. That’s breaking the relationship contract in most cases. That’s generally wrong.

But often, stepping out isn’t quite that simple and callous. There is more to it.

So, how do we cut down on infidelity by either finding a good way to remain monogamous or by embracing non-monogamy?

I know, the first one is obvious. The second one may confuse some of you because you can reconcile commitment with monogamy but not with non-monogamy. But my wife and are I committed to each other, and we have an open marriage now, with almost nothing in terms of jealousy or hurt feelings. There is no one way that commitment looks—it just means you are highly motivated to stick together.

We have to talk to each other about what we need. When we aren’t getting it, we have to speak up. And when we speak up, the other person in the relationship needs to listen and take that need seriously in most cases. Because most sexual needs aren’t illegal or dangerous, even if they’re kinky. And many unmet sexual needs aren’t kinky at all but fail to get met for a number of reasons.

The simple fact is that when we come together in a (theoretically) healthy relationship, we take on obligations. And some of those are sexual ones.

Sometimes, one person will not be able or willing to meet that obligation. The difference between infidelity and non-monogamy for people in such situations is awareness and consent. The simple fact is that often, lack of awareness of an affair has more to do with denial or conceit than with expert sneakiness on the other person’s part. And consent isn’t always something that you give happily. Sometimes, it’s something you don’t even give explicitly.

In my mind, if a person needs to find sexual solace in the arms of another, the goal needs to be to avoid infidelity. Whether or not the end result is monogamy, non-monogamy or splitting up depends on the people involved. And people can be wonderful, awful and complex creatures.

But let’s deal with the issues and call things what they are. Pointing fingers at all people who can’t commit to monogamy and deeming them all “cheaters” or making them out to be oddballs doesn’t make a whole lot of sense. After all, every day and everywhere you go, there are dozens or hundreds of people like that literally all around you. And the fact is, you stand a good chance of being one of them someday, if you aren’t already.
Tags:
Views: 2182