The nail that sticks out 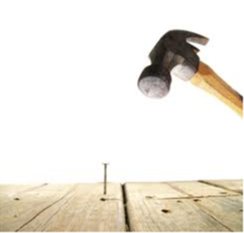 http://www.ecircle.com/blog/2011/09/15/ento-man-hammer-nail/
The absolute extreme - being average. That's right - the most extreme thing is being average. I do not mean belonging to the mass of people who are similar in a way. No, I mean being halfway between groups of people.

Categorising is part of human nature. There is always an us and them, good and bad, ugly and beautiful, acceptable and unacceptable. Categorising is like building a model - while it might disregard certain things, it makes it easier to follow and understand the world around us. It makes processing information faster. A moving model of the solar system disregards pretty important things, like the composition of the different planets, the moons orbiting them, the fact that the sun should be a couple thousand degrees hotter - but it helps to imagine and understand. After all, we do know those differences from reality.

So categorising isn’t bad, nor is it evil - it’s a tool to understand what we experience. But it should be considered as a model only, keeping in mind that very important things are disregarded while creating it, like that our sun is not made of plastic. Our world is way too complex to understand it all at first blink. We need to take in one thing at a time. We need a prism for it that breaks down things into separate categories.

"Facts," like French are good lovers, Italians can cook, Swiss are precise and Dutch have liberal views, are commonplace. Still, no one would ever dream to think it is universally true for each and every single individual. And yet, it sets some expectations.

When it comes to humans, we like to categorise just the same way. Where these categories exactly fall changes with time and societies. Young or old, Democrat or Republican, religious or not (and which religion), poor or rich, famous or not like them or not like them. Putting someone in a category would automatically raise expectations - like an emo should wear black clothes, and a businessman should be middle-aged, balding, wearing a suit and carrying a briefcase. And with most people these expectation might even work - if we could not cram and divide the greatest part of humanity in those categories, then they would not have been created - a model that does not work is useless.

But there is a catch - no one fits the bill perfectly. While ignoring important things in a model, like the temperature of the sun, is acceptable, as we could not forget about those limitations, it is not quite right with humans. Granted, looking at another person, you cannot just categorise them. The ignored important and less important factors aren't apparent - we need to spend time to get to know them before we could start to see where they do not fit in their category. As long as we do not assume and take the trouble to look for those differences, it isn’t really a problem. These categories kind of help to determine where to start. They give as a point that minimizes the chance to mess up. You do not want to treat a young punk and an old lady the same way, neither would take to it kindly.

It becomes one when we ignore to look deeper and treat them according to the category we place them in. Assuming deeper things, like that the aforementioned kid was a Satanist just because he listened to rock and punk music.

We all like to arrange things neat and tidy - even if not the work itself, we like to see our surroundings nicely tidied up, our world neatly categorised. Extremes might stand out from this neat order, but where there is an order there needs to be biggest and smallest, oldest and youngest, someone on top and someone on the bottom. The pink and green hair of punks might draw the eye in a crowd, but when there is a group of them, among them the undyed hair is what is unusual. In other words, if there are enough of them around to create a category, then they might be an extreme end of a scale, but they will be normal. They will fit the order. Whatever we think of them, they will have a place in our world.

Ever did a huge cleaning? Going through all your things, reorganizing the drawers, papers? You get piles of this, bundles of that, and once all is packed away, a handful of items remain that fit nowhere. You spend more time with trying to put them away than with sorting any other object. What to do with them? Throw it out? Put in the closest matching group? Put them in one group? Mostly they end up stashed away out of sight. Either is acceptable when it is just items.

But what about people? What about those who do not fit in any of the tidy groups society separated? Not Republican and not Democrat, not Caucasian and not Afro-American, not religious and not atheist, not vegan and not carnivore.
The fact that we like neat and well-separated also means anything that does not fit into our model is a problem. It can be an eyesore, something confusing and something that needs extra energy to understand and deal with it. Something that makes things difficult. They can be like a nail sticking out, and it is our desire for neat and normal to try to hammer these nails down.

And these nails, these people suffer from it. Some more, some less - depending on how far they are outside the categories. And however strong they might be, the collective weight of society trying to hammer that "nail" down will have an effect, sinking, twisting, deforming them to one measure or another, not allowing them to live the way they would like to or are meant to. This can show in many signs from not coming out of the closet, trying not to draw attention - to making a living out of merely being different!

Sticking out means being hammered - and it hurts

Where did I get the idea to talk about this? From a personal experience. I am into a bit of light bondage. I like to be tied up and restrained, maybe even gagged. I like toys and slight humiliation - and this is a far cry from being vanilla. But I’m not into anything heavy, no hitting, flogging, spanking, electrocuting, wax play, etc. Even in a bondage scene, I like to top from the bottom, like things a very specific way - so I’m a nightmare of a sub. I’m eons from BDSM too. I am not vanilla, and definitely not the red of "kink." It’s more like a drop of red in vanilla - I’m peachy! And while this has never really caused me any big problems, mean glances or talk behind my back, I’m distinctively "other" in this than those two groups. I tried joining both kinds of forums - at one I was laughed at and pretty much ridiculed for being too soft to belong, the other people were horrified by my opinion and my "perversion."

But it's not something I wear on my sleeve - while it did sting it was a small thing to experience, not a big deal to shake off. They were faceless, nameless people who do not matter. Besides, I found it not too difficult to "corrupt" my vanilla boyfriends to my peachiness. So no harm done. But the experience still did sting.

Some people do not have a choice if they wear it on their sleeve or not. They are not just refused by nameless, faceless groups of people on the net. They are ogled, whispered about, and ridiculed on a daily basis. They are being hammered. They are being hurt.

Yes, it also exists! And I think it is the worst kind of attitude possible. At least those who have a sharp opinion about someone they do not hide it under masks. Real acceptance means to accept everyone who does not hurt others or limit their freedom. Everyone. There is no such thing as "okay, but they go too far." So belonging to transpeople or homosexuals is okay, but being both is too much? Or being bi is unacceptable as they should just decide?

Or, why is it a problem if someone wants to live their own life according to stricter rules as long as they aren’t forced? Why should a vicar looked down just because they have chosen abstinence? Their life, their choice. It hurts no one, scandalizes no one.

Fake liberality is a vicious, covert hammering that sends the message: you aren’t even good enough to be accepted, you are worse than the rest of "oddballs!"

It is important to remember no one is average. One has glasses, the other has freckles, one likes the "wrong" kind of movie, the other has the wrong hairstyle. We are all just nails in a board, some standing higher, some lower, some thicker, some smaller, some iron, some copper, but we are all nails equally, and depending on what we set as normal, any of us can be hammered down. Once all of us are hammered to the same height, there will be a problem of material we are made of, the shape, the angle...the list is endless.

If we get rid of the one that sticks out, the small differences that remain will be relatively bigger, and it will require a harder, heavier hammering to fit everyone in a tighter system. If we get rid of the color specs, our world will be black and white.

As long as different and extreme does not want to hurt other people, they just add color to our world, and they should be accepted, whether they are punks, nuns, transpeople, art omnivores, nerds or politically different.
Next time you feel the urge to take the hammer to someone, think if you want to live in a black ad white world. Think if you want to be hammered down.
Tags:
Views: 1293