When Those Boots Come On: Part Two

So far this has been one of the most enlightening summers of my life. Not only have I spent more time exploring myself as the Domme I am, but my life has literally changed drastically in the last few months. I went on vacation to spend time with my friends. However, that vacation left me with more than I could ever imagine. I've learned who I am. I have grown spiritually and I have become the proud Mistress of one of the most exquisite slaves I have ever seen.

""Our truest life is when we are in dreams awake.""

A New Lease on Life, A New Set of Boots, and A New Spiritual Being 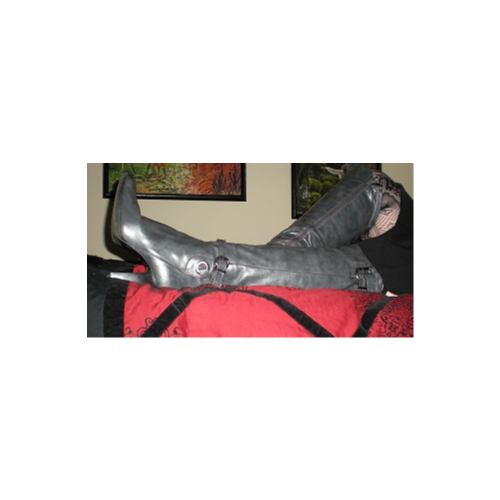 This summer I was given the opportunity to go to one of the biggest medieval events that happen within my re-enactments. I took the time off from work and headed to Pennsylvania with the idea in my head that I would spend the entire week with people I rarely ever got to see and it became much more than that.

I finally came to terms with the fact I do not believe in any manifestation of a Christian "God" anymore.

I had some very amazing sexual experiences.

Three Layers of Realization wrapped and bound in Bondage Tape

I spent two years wondering if I believed in God. You know, the "Big man" on campus that all the Christians preach about, and in my heart I knew that I just didn't believe in him anymore. It is really hard to admit, as I was raised in a very strict Christian household, but finally after reading the Tao of Pooh (Yes, that is the actual title), that there are many more things out there that are a lot more viable than Christianity. I believe that there is something out there, but I'm not exactly sure what it would be.

So, I've began to look into the study of Pagan religion. My current reading is To Ride a Silver Broomstick, which is quite an interesting read, and I'm finding myself drawn to the Goddess like it is something that is completely natural. This is my first realization.

My second realization came along with the sudden break up with the abusive asshole that I dated for two and a half years. I realized that he destroyed who I was, and now that I am away from him, I am able to completely rebuild myself as a better, more dominant person then I ever was before. You have to keep in mind, this is the asshole who told me that I needed to go become a professional dominatrix in Amsterdam and that I would be perfectly happy just doing that for the rest of my life. He said I didn't have the mental or emotional capacity to ever have a real relationship. Yeah, right.

Finding the third realization was a bit easier than the first two. I learned that I was no longer bound in the ways of society. I could truly be myself with the roommates that I chose to move in with. If you read the first article of When Those Boots Come On, you would read about my two friends who I had my first light BDSM scene with. These are my new roommates, and all I can say is that there is never a dull moment, and honestly my new bed got broke in quite well. We will get to that in a later article. So, realization three is that I am a completely free person, no longer tied down by the social norms of the 'vanilla' lifestyle people I used to associate myself with.

So, I've officially cut through all the invisible bondage tape that kept my mind and soul locked within the average boring norms, and I have to say each layer being removed makes me breathe that much easier.

A Week and a Half of Sex and Fun

As I mentioned earlier I spent a week and a half out in Pennsylvania this summer for my vacation. I have to say that it wasn't just satisfying to watch the girls wander around in corsets, but it was very sexually pleasing too. My Ex had been a particularly big asshole leading up to the day that he took me to the Airport, and as we had an open relationship, I decided while I was on the plane that I was going to take a full-fledged advantage of it.

I set out on my quest to get laid more in a week and a half then I did in six months with my Ex. The first night I spent in one of my lady friend’s tents and had some very mind blowing lesbian sex. I do quote her in saying that at when we were done after several hours, that she "Lost count at five". It is a really big pleasure thing for me, to have a woman writhing in pleasure beneath me. Perhaps I was a man in another life, I don't know. All I can tell you is that when I'm with this particular friend, sex isn't just a once in a while deal.

The second was on Wednesday night. I found myself with an older man, a very strapping man with a Doctorate in English. If you want to talk about a man who can turn you on with nothing more than a few mere words, he was the absolute pinnacle of word play. He had teased me quite horribly since we arrived at the campsite on Sunday and I decided enough was enough. I dolled myself up with my previously mentioned boots, a pair of pirate stockings, a black and red steel boned corset, and matching makeup. When he came into camp that night I walked right up to him, and told him what a tease that he had been all week. He did not really realize that he had been and he apologized for it. Before he finished the word 'sorry', I pulled him up close, and stuck my tongue down his throat. My character is a pirate, and I might as well plunder myself some booty.

After I did that, I pulled away and told him flat out that he knew where I was camping and if he wanted more later he knew where to find me. The awestruck look that was on his face was beyond having had his mind completely bent, it was destroyed. He didn't respond at that moment, so I decided to walk away. Around 12am that night, he showed back up at our camp site and we wandered back down to his tent.

The Woman That Became Mine

For our scene, I tied her up in the traditional diamond suit and tormented her by pulling on the different pieces that rubbed up against something very sensitive. Now, this girl is a complete pain slut, and I ended up nearly breaking a wooden spoon over her ass.

The scene was fantastic with her. She is not a submissive, but a true slave. It sparked my interest in her when she sat there and told me that she had the 'fire in her belly'.

By the end of my visit there she was begging to court my collar. I explained to her that it would be hard because of the distance between us, but that did not stray her thoughts on the matter. It took about two weeks for us to hammer out all the fine details of the arrangement, but she is now officially courting my collar. I could not have it any other way; she is a slave unlike most you will meet. She is obedient, not one of those bratty women you find that only want to be a sub so they can be a brat, she is a true slave in her heart. We talk on the phone quite regularly, and honestly, if we did not already have a good strong relationship I would have never allowed her to court my collar.

It feels good to have a girl at my feet.
Tags:
Views: 1536
Related articles

Other articles by Mistress M.