Why Not Let Everyone Be Happy? 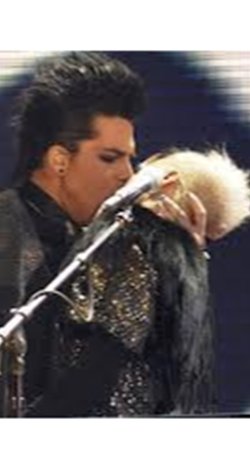 www.google.com/adamlambertonstagekiss
I’m going to talk about the equality in the marriage field. I only have one question, Why not let everyone be happy? Nobody runs to a happily married straight family and says, “Hey please don’t kiss in front of me or my kids, it makes me uncomfortable.” So why do we feel the right to tell homosexual couples this exact sentence? I don’t think that is right in my opinion.
Gay marriage rights are a big thing in America today. I don’t see why though, because people don’t always choose who they love, or what kind of love it is. In my personal opinion I think that we should just leave people alone and let them love and marry who they want. And I know some of you guys are going “oh this chick has to be gay, right?” Wrong. I’m not gay, maybe bi-sexual, but not gay, and I’m married to a man. I still find women very attractive though. But that doesn’t sway my opinion on this subject; I’ve always thought this way.

I don’t see where we the American people, HOME OF THE FREE, get to decide who someone should marry and who they can’t. I just don’t get it. America is supposed to be where a person can be him or herself and not feel judge and discriminated against. I mean come on we let thousands of illegal immigrants (no offence meant toward any foreigners) into our country every day, but we can’t let two American citizens be happy? Why is it such a big deal anyways? You don’t have to live with the person they marry for the rest of your life; no you get to be happy with the person you choose to be with. Unlike the person you are fighting against.

I grew up with some of my family who are gay, and they loved me just as much as my straight family did. I could never tell the difference and nobody in my family ever looked down on them. Think about it people, we get to go and date and kiss and almost anything with our partners out in public, but when someone sees a gay couple kissing or holding hands out in the open, they freak out. Not me I just see it as another happy couple. Another thing that worries me is that everyone says, have you seen the statistics for gay couple’s children? I personally have not, but I know kids who grew up with the same sex parents and they are just fine. They didn’t turn out gay or abusive or homeless or any other of this crap I hear about it. They have families of their own and plenty of friends who aren’t offended by their parent’s choices.

I hear people talk about how sorry they feel about the kids that come from same parent households and I think they are all wrong and have no idea what they are talking about. It doesn’t matter what kind of sex your parents are, it matters that they love you unconditionally and are always there for you when you need them. The people that talk bad about same sex couples are just like a racist in my opinion. Talking crap about something they have no idea about. When you talk about a gay couple you see just think about what they are going through without your drama, their parents may not approve so they are taking flak for being how they are or their friends won’t talk to them anymore, just stop a minute and think before you open your big mouth.

In my personal opinion people should be able to marry whomever they want; unless you are related of course, and nobody should be able to limit who you choose to love in the end. Some states already allow it but people are trying to outlaw it, it’s just stopping someone from being happy. Happiness is a god given right in my opinion let’s not limit it. Let's let everybody be happy.
Tags:
Views: 1524
Related articles

princessphoinex
I am a newly married young women. I like trying new things and am very interested in doing reviews on things that I try.
I love music and would love to try some of the products that vibrate with the music from your mp3 or ipod.
I can be outgoing but not all the time, mostly im shy and keep to myself. im just really interested in trying a few new things and expand my sexual interests a little. ;)

Wanted to thank all my followers.