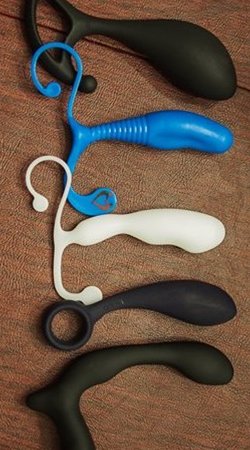 Image courtesy of Trysexual
This article is less of a "how-to" and more of a demonstration that the enjoyment of anal penetration or stimulation has no bearing on one's sexuality. It is a common misconception by many hetero females and males alike that any man who likes his ass penetrated is "gay" or at a minimum, bisexual. That is simply untrue.
Disclaimer: First off, I do not intend to offend anyone with my personal opinions, feelings, use of language or terms within this article. Because we live in such politically correct times, I never know what, if anything, is going to be considered offensive by any given audience. My goal is just to clear up some sexual misinformation from my own point of view.

For now, I am quite happy with my combined prostate/penis orgasms as they are, but am always looking for better toys or methods of stimulation to reach the ultimate climax. One of my missions on EF is to find the best toys I can and to maximize my orgasmic pleasure. So far, I've found some real winners and a few losers.

In my early days of exploring my sexuality, I kinda just fumbled around with cheap toys anally, because it was taboo or because I read it was supposed to feel good. I don't remember really trying to target my prostate or remember seeing so many prostate specific toys back then. I probably never even made the association between prostate and pleasure. My experiences ranged from painful & mood killing to pleasurable and ecstatic, at different times. There were a lot of variables I won't go into for the purposes of this article. I only very rarely shared these desires or participated in them with partners, 'til a year ago when I met my future wife and we started shopping for toys together. It was that search that brought us to Eden Fantasys. Ironically enough, she is pretty vanilla and the last person I thought I would ever be using anal toys with.

I could probably write an entire article just on the social stigma and fears that men have in admitting or expressing their private desires in public, to friends or even the most intimate of loved ones. I have become more open in talking about my own sexuality as I've gotten older and more experienced, but I too have been, and still am, guilty of keeping some experiences and desires a secret for fear of judgement, rejection or something as outlandish as blackmail. I'm not really that scandalous even, but you never know, right? I am lucky to have a partner who is understanding herself and open to new things, but I still harbor a few things I don't wish to tell just anyone or admit openly.

In the past, I've heard all kinds of reactions to my own experiences or fantasies. They are wide ranging from turn-on and curiosity to disgust and everything in between. People can be very ingrained in their opinions, despite never having any first hand experience. They seemingly absorb these hardened opinions from those around them or misconceptions they heard in hearsay. One of my favorite come backs to people who draw fast conclusions is to ask them "If you (or any other man) could suck your own cock, you would, wouldn't you?" "Why yes" they say. "Does that make you gay, just because you sucked a cock?" "Well,...ummmm no, I guess not."

In Summary
So, yes people, you can enjoy having your ass pleasured, no matter what you identify as sexually (that goes for males or females). It doesn't matter; it is gender & orientation neutral. You can be straight and like anal play or gay and not like it, or any other combo, for that matter. It's not for everyone, no doubt, but it can be immensely pleasurable for many of us who choose to try and explore our sexual bounds. So next time you hear someone tell you or someone around you that playing with/penetrating your anus makes you gay/bi/other, be sure to set them straight (no pun intended) and let them know that enjoying your own body, in whatever way, has no bearing on your sexual preference. For those who have never had their prostate tickled, give it a try. You might be surprised how pleasurable it can be, and rest comfortable knowing that it has no bearing on your sexual identity and orientation, if that is something that was holding you back. Plus you get the bonus of a healthier prostate and improved erections. Who doesn't want that? I put a list of some recommended toys below that I have tried or are highly recommended on EF. Happy shopping!
Tags:
Views: 3318