The Plight of the Submissive Feminist 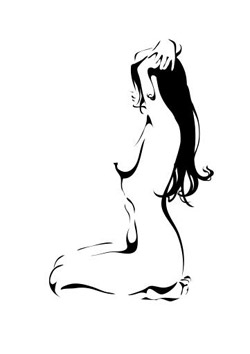 When you’ve spent most of your life fighting to be taken seriously as a woman, it can be extraordinarily grating to discover that you want to call any man “sir.” This, then, is the plight of the feminist sexual submissive—how do you maintain your identity as a strong, intelligent, independent woman when you also get off on letting people push you around?
Feminism, for me, is defined by the classic quote “the radical notion that women are people.” Gender, in other words, should not be a factor in the norms and considerations of society. There should be no such thing as “women’s work” or “guy stuff,” and every person should have access to opportunity based on ability… not based on whether or not they can pee neatly while standing up.

I was raised by strong women, and around strong women, and I could not help but grow up to identify as a feminist. Not only can I appreciate the fights fought by the earlier generations of intelligent, ambitious women, I’ve engaged in many of them myself. The battle for women to be respected for something other than how cute we are, or what a gift we have with one of the traditionally feminine arts, is far from over. In my college I was one of two female math majors in a class of over 40, and I have documentation of at least three times when I had to prove to male professors that having a vagina didn’t make me incapable of succeeding in their class.

It is thus extraordinarily, perhaps even inordinately, important to me that people respect me for my brain. I am intelligent, ambitious, and highly successful in my chosen field, and I’ve had to fight very hard to be seen that way. My mind is the center of my self image, and if I am not a strident feminist, I am an ardent one. Just this morning I wrote a long explanation to a charitable organization about why it is not acceptable to address a group e-mail as “Dear Sir.” The implication of inherent male authority is intensely offensive to me - not everyone with power has a penis. What they wanted, after all, I was more than capable of giving them… and I am no sir. It would be nice if they didn’t make that assumption so casually.

In the privacy of my bedroom, “sir” has a very specific meaning, and I don’t use it casually at all.

Hello. My name is Morgan, and I’m a sexual submissive.

I like giving up control over my body in the bedroom. I like being able to focus on giving my sexual partner what he or she wants. I like trusting them enough to give them permission to take. I like having one aspect of my life where I do not always have to be the best, the brightest, and on top. I like the way it feels to call my dominant “sir.”

It took years for me to embrace my submissive nature, in part because it seemed to be so antithetical to my feminist beliefs. Then I realized that part of being a feminist, for me, is taking control of my sexuality – admitting what I want, and finding a way to have it that keeps me safe in both body and mind. I am fundamentally in favor of everyone being able to admit to, and negotiate, the sex that they want – as long as it does not endanger others. Sex, after all, is just another facet of life, and if there is nothing wrong with men embracing their desires then women should be able to do so too.

There is a stereotype that it’s Type A males who are most likely engage the services of a professional dominatrix, and it is there for a reason. When the weight of the world rests on your shoulders every day, it can nice to find ways in which to pass the burden to someone else. If sexual submission is that way, there’s nothing wrong with it – it’s not just because I’m a woman and that’s my “place.” No one is going to believe that a Fortune 500 CEO is less smart, powerful, or successful because he likes to grovel before his mistress on Wednesdays and alternate Sundays. It shouldn’t diminish me either.

It’s sometimes difficult to be a feminist submissive. Still, there is nothing in my sexual submission that is inherently inimical to my quest to be treated as equally strong and competent as are men. The reason that it sometimes feels that way is that certain people treat female submission as the default. It isn’t, and it shouldn’t be. Women are not inherently submissive to men. They’re not inherently dominant either. The genders, in this regard at least, are largely equal. Some individuals choose to submit to each other, and, on the whole, the inclination to do so is largely independent of their sex.

Still, for me, one of the hardest things about being a female submissive in the public scene is that the ways in which other women are submissive affect people’s perceptions of me. I’m an egoist, and I want people to look at me and see me as the competent, capable, intelligent woman that I am… even when I’m on my knees.

The issue is that not all submissive women see their sexuality as a powerful choice. Not all of them choose it with intention and their own free will. Some women actually are submissive primarily as a way to avoid taking responsibility for their own sexual desires. This means that there are people out there who, based on their experience, legitimately see me as similarly weak, incompetent, uncomfortable with my sexuality, or incapable of caring for myself. It can be extraordinarily frustrating, but there is little I can do about it except submit in a way that illustrates my intelligence, active intention, and honor… and check to make sure that those women who seem to need help have a way to get it.

When I submit, I do it from a place of strength. I decide whether my partner is worthy of such a powerful and intimate gift, and I do not give my submission to anyone who does not both understand and appreciate the depths of what I am giving up for them. I value myself highly, and so I submit to people who realize that doing so does not make me less. I accept I am an intelligent, competent, submissive feminist – who sometimes finds her power by choosing to let it go.
Tags:
Views: 5098
Related articles

Morgan
Morgan is a writer and performer living in New York City.