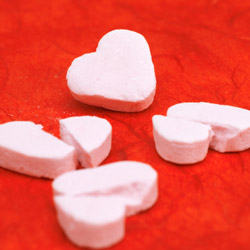 We were drunk the first time it happened. And maybe that’s always how it always goes. A handful of shots, a slow dance, red lipstick.

We were drunk the first time it happened. And maybe that’s always how it always goes. A handful of shots, a slow dance, red lipstick.

She touched my wrist in the back seat of the cab. We collapsed downstairs on the couch, sweaty and smoky and giggling. We kissed.

“I don’t want to be second best,” she told me, dragging on her cigarette tensely.

“I care about you,” I promised, my skin tingling, fingers itching to touch her. “And he says it’s okay.”

When her slender fingers tugged my jeans open, my marriage—all four months of it—became very complicated.

Veronica was everything I wasn’t. I spent my free time online. She took off on cross-country road trips in a beat up old Nissan. I worked full time in an office. She worked the night shift at a diner. I married my college sweetheart. She brought home young lovers and called me, voice husky and amused, to tell me how she’d kicked them out in the morning.

But she wanted me. Despite my shyness. Despite my insecurities and relatively tame lifestyle. Despite my husband, the man I’d just married after six years together.

“I just don’t understand marriage,” she’d snort, putting me on the defensive. I’d explain my commitment to him with my arms around her and my lips against her throat.

It never bothered me.

When Veronica started staying over at our apartment, Greg watched us flirt and giggle. He watched us dance at the club, his fingers tight around a sweaty beer.

I decided to use the contents of his hard drive to my advantage.

One night, as I stroked him off, I asked him if I could fool around with Veronica. I wasn’t sure what I was asking for—but I knew that whether he said yes or no I’d do it. So maybe I was asking for forgiveness.

I wanted her badly. Despite the ring on my finger, the thank you notes on my dining room table, the pictures from my Honeymoon tacked up on the wall. Without clarifying the extent of my husband’s permission, I gave up on trying to deflect her advances. We tumbled into an affair.

For a long winter, I spent nearly every night with Veronica. She began living in our apartment. I struggled to find a name for what we had. Was she my girlfriend? Could I have a girlfriend and a husband? Was this polyamory? I knew it wasn’t swinging, because it was about much more than the sex.

But the sex? The sex was great.

Veronica left me fevered. After six years with a man, I’d forgotten the feel of a woman’s skin against mine. Her soft nipples in my mouth, the curve of her ass under my fingers. We devoured each other, making love for hours before sleeping together, curled up and content.

I felt progressive. Free. I reasoned that I had enough love to go around, enough for both of them. As winter ended and Valentine’s Day approached, I bought them each presents. His in a black bag with red paper. Hers in a red bag with black paper.

For a while, it worked. Or it was easy to pretend it was working. We tried to share, to experience our love life as a unit. But he quickly found that sex with two women left him self-conscious about performance, about his body. He didn’t know Veronica as well as I did, wasn’t sure how to please her.

I started sleeping in the guest bedroom, leaving Greg alone. He stopped fantasizing about threesomes. He was just lonely.

So he came to me and asked if he could be with other women. Not because he had his eye on someone else, but because he wanted to know what I would say. He needed to test me. Was our marriage truly open? Was he allowed to fuck another woman? Would I let him?

Was I being fair?

I went cold that night, aching for what I knew I would lose. Stubborn, angry, I argued with him. How dare he make the comparison? He wasn’t bisexual. I would never fuck another man—it wasn’t who I was. How could he ask me for permission to be with another woman?

The tangles exhausted me.

It had to stop.

Although Veronica had been aware of what she’d gotten into, it didn’t make it easier on her when I chose my marriage over her.

We talked. Tried to find a middle ground. But the new regulations on our sex life sounded so clinical when the reality was we had to break up.

I loved her. I loved her mouth against mine. I loved sharing my bed with her, I loved it when my husband kissed her, when the three of us stayed up all night cuddling and talking and touching.

“It’s hot,” my husband confessed, his mouth at my ear, his fingers inside of me. Then, heated and aroused, none of the complications mattered. He liked seeing me kiss another girl.

So I kissed her. Again.

“Maybe we can do this,” I cried, my arms around her, an empty bottle of wine beside us.

Veronica and I became refugees, stealing away for afternoons just driving along the highway. Hiding from the intimacy of dark evenings and long nights. As our reality became tearful fights, regrets, and stolen kisses, we slid toward the death sentence of “just friends.”

Hurt and strained, Veronica and I stopped acting like friends.

She stayed out for a weekend and slept with another woman. When she got home, she told me about it, her voice sharp with pride.

“What did she look like?” I asked, choking on my own nonchalance.

In fits of overthinking, I read books, talked to friends, and visited message boards. Open relationships seemed to work for so many people. What had we done wrong?

Nothing I read helped. But as time passed, and I was able to put my pride and the sharp heat of regret behind me. It became clear that none of us had really been ready, emotionally, for where our desires had taken us. While none of us had morally or otherwise objected to our arrangement—we had all gotten in over our heads.

Veronica had wanted more than a best friend.

And I had wanted them both.

We’d gone it the wrong way from the start. We never set the right expectations. We refused to acknowledge the fact that all three of us had jealous, possessive tendencies. None of us really believed in free love.

Experimenting is healthy when you’re willing to admit that’s what you’re doing. Making out with another girl at a party in college? A furtive hand-job from an old friend? An evening at the strip club you were always scared to go to? Experimentation.

We answered the call of our desires without acknowledging the framework of experimentation. We never laid down rules or boundaries. We tumbled headlong after our desires. We spent nearly a year pretending we knew what we were doing, and barely came out of it intact.

After several months went by, Veronica and I slowly began to rebuild our friendship. We found that we could embrace without being overwhelmed by desire and awkwardness. She began dating a man and realized, for the first time, how hard our relationship had been on my husband. We found common ground when her new boyfriend saw me as a threat.

We learned to laugh about it, exchanging sheepish grins.

I still love Veronica, and I still think she’s the sexiest woman I know. But in the smoldering aftermath of our love affair, I value her laughter and her intelligence and her company more than I love the way her lips make me feel.

We fucked up, together, and forged an intimate, fierce friendship.

Last year, in Vegas, I watched a tall, thin stripper writhe slowly between his thighs. Her hands glanced over his erection. His hands glanced over her tight, tanned ass cheeks. Then she danced for me, her perfumed hair tickling my face as she cupped my tits softly.

That night, in our hotel, we kissed fiercely, fucked before we reached the bed, and finally fell into it together, panting and damp. We held hands in the dark.

I still close my eyes and touch myself sometimes, remembering Veronica’s face between my legs, her mouth against me, my hands in her hair.

Polyamory didn’t work for us, but I’m glad we walked through that fire together—instead of spending the rest of our lives wondering what we missed.
Tags:
Views: 1597
Related articles