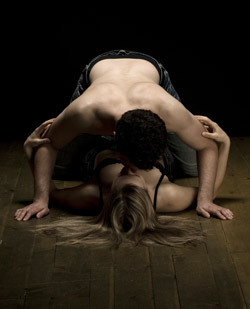 At 31, she was diagnosed with Primary Mediastinal Large B Cell (Non Hodgkin’s) Lymphoma. Described at times as “diffuse” and “aggressive,” this cancer targets white chicks in their early thirties. Now, 16 months into remission, the author looks back on her road to wellness, including some sexual detours along the way.

I stared blankly at the scan results, a giant white mass filling the screen. So that’s why I can’t breathe, I said to myself. That was probably my last coherent thought for a month. I could only focus on my next breath, my next meal, my next nap. Not surprisingly, sex was the last thing on my mind.

As my husband and I shuffled through the steps of diagnosis and starting treatment, our day-to-day routine shifted to a new state of normal—from working to waiting, from meditation to medication. But with any routine comes a sense of comfort—if only in its consistency. As some level of predictability returned and death’s looming seemed somewhat less imminent, I began to consider incorporating sex back into our lives—but I was frightened and plagued with questions. What if I taste like chemo? Would I disgust him? Would it hurt? What if I can’t do it? Could I have already had sex for the last time?

I refused to accept that possibility, and set about exploring potentially becoming sexually active again. I decided to start by getting back “in touch” with myself to see what issues might arise, and how to compensate for the changes in my body. I proceeded gingerly, with great caution. It was weird, it was terrifying, but in the end, all my bits were where they should be, and I was far more relaxed. Flush with success, I seriously started to consider having sex with my husband.

Still, I hesitated. Although I was incredibly fragile, emotionally and physically, I was fairly confident we could work around my physical limitations. My greatest anxiety stemmed from overwhelming insecurities over the changes in my appearance caused by the chemo. At first, they were somewhat amusing in their novelty, like seeing myself in a fun-house mirror. But as the long months wore on, and my body and mind were repeatedly bludgeoned, it became harder and harder to find the humor in my reflection.

Mercifully, my mind has blurred most of those memories, but I still vividly recall a particularly troubling evening. My husband, desperate to fill my days with more than bad movies and canned soups, suggested we hit the town for a nice dinner in all our finery. He’d just hit a professional milestone and wanted to celebrate. Not wanting to diminish his accomplishment, I decided I would be strong enough for the outing. I started the long, slow process of getting dressed.

I showered and smeared lotion over my swollen face and across the top of my bald head. Then I turned to my makeup bag and drew on a pair of somewhat symmetrical eyebrows. Padding into the bedroom, my eyes were reflexively drawn to the movement across the room. While I still couldn’t recognize that thing in the mirror as me, I’d gotten used to seeing her around. I’d give her a little wave when I saw her, but I’d learned to avoid her, focusing on the floor in the bathroom, ducking by large windows at night, pulling the hoodies she consistently wore down low over her eyes. I had no interest in knowing her.

I dug through my closet to find something that would be appropriate for a dinner out. Pulling a black wrap dress over my newly apple-shaped body, I tugged the hem into place—and made the mistake of looking in the mirror. Her sunken eyes bore into mine and something inside me snapped. I screamed at the creature in the mirror, “Who…no…WHAT the hell are you?!?” I raised my hand to my head, livid. The girl in the mirror, dejected, wiped off her powdery eyebrows with the heel of her hand, leaving only a wide pale expanse of forehead above her gummy, lashless eyelids.

I could not have felt less empowered, less beautiful, less feminine, less whole. I dissolved into tears and begged my husband to cancel our reservation.

While my insecurities guaranteed I would not be prancing about in a negligee wooing my husband with raw sex appeal, I still felt driven to give lovemaking a try, but I had other concerns that kept me from moving forward: I was in a whole mess of pain.

Everything hurt—my muscles, my bones, my skin, even my hair follicles. I had to sleep on silk pillowcases because the tug of cotton on my skin would rip me from sleep. Between callused hands and stubbly chins, men aren’t the softest of creatures. (My husband confirmed my suspicion that me screaming: “Ow! You prickly motherfucker!” might kill the mood.) He’d have to be very careful how he touched me.

In addition to being hypersensitive, my skin was paper thin and prone to tearing. I had three different medications to soften and facilitate my bowel movements, yet I still tore and bled with nearly every single one of them. Did I mention I also went into menopause? I was dryer than an apricot in the desert, and genuinely concerned that intercourse might rip a girl right in two.

Lastly, I worried about becoming “overly excited.” I’d heard about patients who were unable to complete chemo due to the heart complications it caused. I was already having issues with Tachycardia and low blood pressure. I certainly wasn’t looking to add “heart attack” as another potential cause of death.

Yet, despite these deterrents, I was convinced the rewards outweighed the risks. When faced with horror, we often turn inward, withdraw from our loved ones, disengage from life. I had to consciously choose to continue to fight, to continue to live. I’d read countless studies citing how the sight and touch of a loved one had improved patients’ threshold for pain, capacity to heal, speed of recovery. I clung to that hope as my husband led me to the bedroom.

The first time was awkward, not unlike losing my virginity nearly fifteen years prior. I needed perfect darkness and ample covers to hide my hairless, swollen body. I made him promise not to touch my bald head. I promised to stop him the moment it became too much.

Our coupling during that period was unlike anything I’ve experienced before—or since. Every movement was slow, gentle, meditated. Many tears were shed—tears of sadness, love, fear, gratitude, and happiness. The only words spoken aloud were, “Is this okay?” and “I love you,” but so much more was communicated: I don’t know what all this means. I’m scared. I just want to share something real, share in now, share something beautiful, share some time with you while I still can.

We were able to overcome the obstacles and share a moment of intimacy, a glimpse of our lives together before the tumor nestled itself between my heart and lung. We were able to reconnect in a way that was exclusive to we two. Even my chemo-addled brain could understand the love and tenderness my husband offered in those private moments.

I was empowered. I was feminine. I was beautiful.

Even in my broken, weakened state, there was a way that I could express my love and gratitude to the man that slept in the chair by my hospital bed on those long dark nights. When I felt I had nothing else, I knew I had this one token that I could give to him, and we could share the gift together.

I was whole. I trusted my body. I trusted it would all be okay. I was a woman again, a person again, myself again...if only for those few brief moments. I remembered what I was fighting for, why I wanted to live so badly. I remembered how it felt to have something other than chemo coursing through my veins.

That reminder of what life had been and could someday be again gave me the strength to drag myself to the hospital and open my veins to their poisons again...and again...until I beat cancer. Chemo may have killed the Cancer, but continuing to live saved me.
Tags:
Views: 2211
Related articles

Elly Lonon
While I've been writing about my vagina since the beginning of time, I'm new to writing about sex. When I'm not horrifying my mother by writing at SexIs, I'm consistently rambling at my personal blog BugginWord.com.