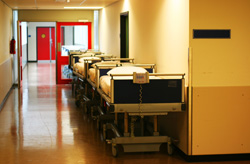 Q: What’s almost 2,000 pages long, has the head of a donkey, the tail of an elephant, the petrified genitals of a Tyrannosaurus Rex and the scent of something rotten in the state of U.S. Politics?

A: The Affordable Healthcare for America Act

You probably don’t need to read all 1,990 pages of HR 3962 (affectionately nicknamed “Affordable Health Care for America Act”) to know that most politicians have the reverse-Midas touch. You remember the story of King Midas: Everything he touched turned to solid gold. What’s the reverse-Midas touch? That’s where everything they touch turns to sh*t. Yep, you get enough magic sh*t-fingers together in one place (like say Washington, D.C.) and you have a real mess on your hands (affectionately nicknamed “Affordable Health Care for America Act”).

We’re the only industrialized nation in the world whose comprehensive healthcare policy for its citizens is: “Don’t get sick.” With so many models to choose from, we could learn from other nation’s mistakes and pick the best. No, no we couldn’t. Because we’re Americans. We’ll do it the cowboy way. In order to protect the businesses (insurance companies) that have always put consumers first (cough) we’ve come up with a healthcare plan that looks like three-card Monte. A little of this, a little of that, a lot of look over there and where’s the Queen of Diamonds?

Make no mistake. The fear of “socialism” and real reform is what is getting us this twisted old and new plan—in which a new “marketplace” of insurance options will emerge to compete and co-exist with the old. In the best of all worlds, this will be like the public and private school systems. Separate but equal. Oh, yeah. As equal as you can afford.

To know who benefits most from legislation, check out who is in support of it.

AARP (American Association of Retired People) are all for it. Apparently Obama intends to fill the holes in the Senior’s donuts with Bavarian Crème, or plug the gap in prescription coverage with regulating pharmaceutical company profit-gauging and lowering name brand prescriptions by 50 percent.

Women like the bill (except for the parts they really, really hate). Currently, a 40-year-old nonsmoking woman will pay between 1 to 65 percent more for than the same coverage than her chain-smoking male counterpart. Women also traditionally work in fields that are less likely to offer insurance benefits. The Obama Plan (the even cuter nickname for American Hellcare Reform) will end the gender variation in sticker price.

No one can be refused based on pre-existing conditions. It will be against the law for insurance companies to deny coverage for health reasons or risks, or cancel your policy when you get sick and actually use it. Read this. The plan will eliminate co-pays for preventive care, cap out-of-pocket expenses, and be available on a sliding scale for low- and middle-income individuals and families.

Conservative religious leaders, Denver Archbishop Charles Chaput, and Focus on the Family’s founder, James Dobson, are circulating a “pledge” called “The Manhattan Declaration,” refusing to abide by laws that support gay marriage or abortion or transgender rights. Hundreds of signatories of the Declaration vow to ignore any laws that contradict their worldview. Authors argue upcoming healthcare reform and recent hate crimes legislation may prevent them from preaching against gays.

Healthy young people will be the ones to see the biggest jump in their premiums. Well, kids, this is what you get for forming a garage band instead of a lobby group. Worse yet, in the future (three to four years) health insurance coverage will be mandatory like car insurance.

* “All individuals will generally be required to get coverage, either through their employer or the exchange, or pay a penalty of 2.5 percent of income, subject to a hardship exemption.”

To insure the proper amount of hysteria from tea-baggers, this codicil will be enforced by the IRS. There will be a line on your 1040 for you to list an additional dependent—your insurance company.

Remember I said there was a part of the bill that women (and reasonable people regardless of chromosomes) really, really hate? Really, it’s the part of every bill that I hate; the part where a bunch of wingnuts who can’t get what they want (a Puritan revival) tack their mean little agendas in wherever they can. In this case, it’s the anti-abortion nuts trying to repeal Roe v. Wade through a back door. By stirring up some talk radio frenzy that healthcare reform means abortions will be handed out like free government cheese, the GlennBeckies and their duly purchased representatives have scribbled in some horrific revisions, i.e. the Stupak Amendment.

The Stupak Amendment would change all current insurance to prohibit (read: outlaw) abortion. It requires that women who want coverage purchase a separate insurance “abortion” rider but does not require states or companies to provide such riders. In fact, it offers incentives and mandates to eliminate them.

According The National Women’s Law Center: “The Stupak Amendment [makes] it virtually impossible for women to purchase coverage for abortion in the exchange, thereby taking away coverage that millions of women currently have. The Amendment is a blatant attempt to use health care reform to achieve a goal of the anti-choice movement.”

On August 4, Matt Barber, the director of the conservative legal group Liberty Counsel and the Associate Dean of Liberty University School of Law (founded by the late televangelist Jerry Falwell) sent out a press release titled, “ObamaCare Likely to Mandate Free ‘Sex Change’ Surgeries.” The release asserted that “cosmetic ‘gender reassignment’ surgeries for both U.S. citizens and illegal immigrants would be provided—free of charge—courtesy of the U.S. Taxpayer.”

Coincidence or conspiracy? At the same time, a wannabe amendment was being circulated by conservative lobbyists that restricted services to transgender persons, including hormone treatment. This bit of writing couldn't find a legislator willing to sign his (or her or zir) name to it.

Sex Education: Just (Don’t) Do It

Early drafts of the bill included Abstinence Only sex education plans. but most have been stricken to include just the vague language. There will be “family planning” and sex education, but what form it takes will depend on who and how this is interpreted. Most likely the conservatives orgs will use fed money to teach, “Not without a wedding ring!” and liberal orgs will use it to pass out condoms at high schools to the same kids who wear pledge rings while having unsafe sex in the bedrooms of their disbelieving, ultra-conservative parents.

On December 3, by a vote of 61-39, the Senate passed the Mikulski Amendment to the Patient Protection and Affordable Care Act. The Amendment, submitted by Senator Barbara Mikulski (D-MD), requires all health plans to cover comprehensive women’s preventive care at no additional charge. Meaning pelvic exams, mammograms, counseling, testing and treatment for sexually transmitted infections (STIs) and family planning will be available under all insurance plans with limited or no co-pays.

Does this include birth control? No one knows. Tait Sye, spokesperson for Planned Parenthood Federation of America said, “It allows Health Resources and Services Administration (HRSA) to recommend what should be covered.”

According to a Senate Democratic aide, if individual drugs or “even categories of drugs” were listed, “we would have seen amendments filed on each one. I trust Sebelius (Kathleen Sebelius, head of HHS) to do the right thing with respect to covering birth control.”

Take Two Tea-Baggers and Call Me in the Morning

Tea-baggers (allegedly named after Boston Tea Party and not the sexual practice of slapping someone in the face with testicles) seem more dedicated to a sexual de-revolution than fighting taxation without representation.

If the bill seems confusing, don’t worry—it’ll change. It won’t be less confusing, but it won’t be the same bill by the time it gets out of committee and goes back for re-approval. I predict the worst bits of the baggers get neutered. Yes, Stupak, I mean you. I only hope that the wingnuts have garnered enough sound bites from their previous posturing to let a more digestible version get to Obama’s desk in this century.

I looked through the 1,990 pages (it was a lot like trying to read tea leaves) to interpret the murky effects of this bill on our future sexual rights and freedoms. I mostly got a headache. I did have fun putting words like Viagra, birth control and poontang into the pdf search engine. But Stupak aside (and I pray that it is), the best indication of whether your future insurance will cover your birth control shots, gender reassignment, or the services of a sex therapist is whether your insurance covers it now.

For the Uninsured among us, it’s a brave new world. Who knows what visionary non-profit groups might spring into the marketplace of The Exchange? Dare to dream.
Tags:
Views: 962
Related articles