eri86
Use your smart phone to covertly take pictures of people so you can show your friend later when you tell them whatever story you have to tell about the person you saw and took the picture of?
Reply
05/24/2013
All promotions

VeganChick (is Gone)
I have never done it covertly, but I took a picture of this guy out of my car window. I have a friend that I knew would think it was funny. 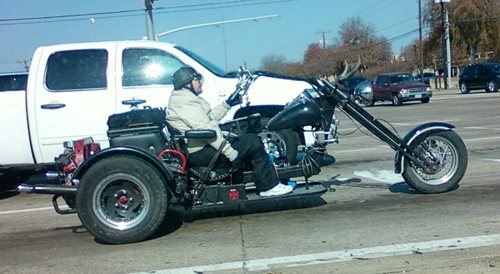 Nezzie13
Sort of...
My brother has severe autism and bipolar disorder and isn't very fond of posing for pictures, so we don't make him unless there's some sort of event. My mom's really sentimental about him since he's her first born/her only son/wasn't supposed to make it through the night as a babe/always going to depend on her, so I'll snap pics of him going about his day without him noticing just to show her. It makes her happy

K101
Quote:
Originally posted by js250
No-I am lucky if I can get my dumb phone to take pics......I still cannot get into the whole phone thing.
Lol. This describes me too. I just have a Pantech Pursuit & don't bother taking photos with it anymore because my camera has that use, and does far, far better of a job.

I hardly even keep up with my phone, so no need for me to bother with a smarter one. Lol.

However, I'm not sure what you mean by covertly take pics of other people. Why? If a stranger is doing something crazy or something like that?

Well, I don't like to photograph people without their knowledge... and permission, but I understand sometimes, you can't resist! I mean only sometimes though & there was this time I had my camera in my pocket & we'd all gone out to eat and taken the kids & one of their friends, so afterward, they had to go to WalMart. While there, in the fingernail section, by the way, there was this dude. Very out of the ordinary. He had a phone to his ear & when we'd move to a different spot, he'd follow. It became obvious he wanted us to hear his conversation. He was talking to someone & it lasted for the entire 45 minutes we were in the aisle. He was saying jumping all around the aisle close to us saying "girl you know a ***** gotta get his mani and pedi on. Tell me what kind of clippa's I be needin'." The conversation went on and on, no matter what aisle we went to, even when we LEFT the nail aisle and he followed. So it got even funnier with him jumping around, so I videotaped. Lol. Didn't put it online or anything because that might be mean, but we do have laughs about that video. LOL.
Reply
05/25/2013
Total posts: 8 Unique posters: 8
Make a post
Top