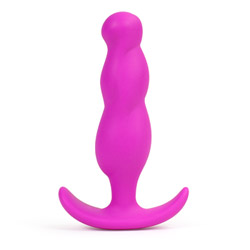 This plug gives you far beyond your money's worth. For less than twenty dollars, you get a plug that is easy to clean, has unique features in its design, and is flexible yet sturdy. For someone who enjoys his/her plug being bigger than the typical small one, it does everything he/she would want it to.
Pros
Its base, its structure, and its materials
Cons
It is "medium" rather than "large" and its base can create problems when used with other toys.
Rating by reviewer:
5
extremely useful review
When I saw this toy at a local sex toy retailer, I thought it was a medium sized toy. In comparison with other "large" plugs, it honestly looks more medium sized than large. Don't let that deter you though - it's a very fun plug.

My favorite features of it are its base, the three bulb-like parts, and its materials. I love the base because, unlike some of the bigger plugs, the base is not a giant square. I look at those plugs and cannot imagine how they'd be comfortable to wear, especially if I wanted to wear them out for an extended period of time. The base on this fits comfortably between my butt cheeks and is still easy to grab to remove later. The three bulb-like parts feel really good as I'm pushing the plug in. Back when I was first playing with it, the third bulb was uncomfortable, but this was not much of the problem. The way that the three bulbs are designed allows me to have the first two in, let go of the plug for a minute (to grab more lube, for example), and not have to worry about the whole toy slipping out, like I do other plugs. I've also come to love silicone, as all my plugs are made from it. You can't use silicone based lube with a silicone plug, though, but there are lots of water base lubes on the market. Silicone is hypoallergenic and latex-free. You can clean it with boiling water or in the dishwasher, which is very convenient. Silicone also feels incredibly smooth to the touch, which means a very nice sensation for your butt.

This is a pretty sturdy, though flexible, plug that feels very nice in the hand. I love that it can bend and that silky smooth feeling. Both in my hands and in my butt it feels wonderful. I would have bought the black one, had the store had black, but pink works too.

Become a Reviewer
My Mood naughty 3 large tags
About author