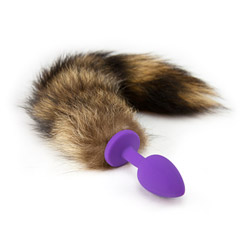 The design was good for the price point. The tail was rather small, but it is a nice starter tail. Eventually, I would like to upgrade to a larger, bushier tail, but for a first-timer, it was very comfortable to use and was a nice option to have before spending quite a bit more on a larger, fluffier tail. The tail being glued onto the plug could be considered a flaw in the design to some, as it cannot be removed for cleaning which might be a dealbreaker for some as far as sanitation is concerned. The tail can be wiped down with a damp cloth, perhaps even gently washed under running water, but anything more thorough could ruin the fur. The plug is named the "Foxy" plug, however, as the picture appears, it is actually more of a raccoon tail. It does look exactly like the image pictured. It's very petite, with the tail measuring about 6 inches, and the plug about 3 inches. It's not intimidating at all and makes for a great starter plug.

As mentioned above, this might be the deal breaker for some, but we found it rather easy to care for. The plug can be cleaned with a mild detergent and water, and the tail can be cleaned by wiping with a moist cloth. We avoided getting lubricant on the faux fur. We had no issues with cleaning.

The tail came in a simple, clean plastic sleeve, in a plain cardboard box from Eden. I did keep the plastic sleeve to store it in, as silicone is notorious for attracting lint. One could most certainly get a pouch or box to keep the toy in, for more discreet storage if they so wished. It did not come with any directions, but it is fairly obvious as far as how to use it is concerned.
This product was provided free of charge to the reviewer. This review is in compliance with the FTC guidelines.