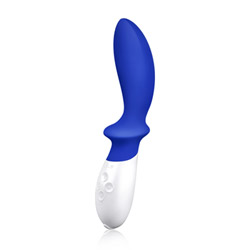 We've enjoyed using it in a number of ways so far. I've used it to massage my prostate while laying on the bed. It was really enjoyable in this fashion; however, as this was pretty much all I was able to do at the time it also forced me to focus on the sensations. I haven't tried to use it during sex in this way; however, It took me almost 45 minutes to get hard while using it in this fashion, so unlikely it will be used during sex on me in the future.

The toy is 100% waterproof so could be used in the shower/tub if you choose.

The handle (non-insertable part) of the toy appears to be a decent quality plastic. This is also where the control buttons are located, which are plastic. 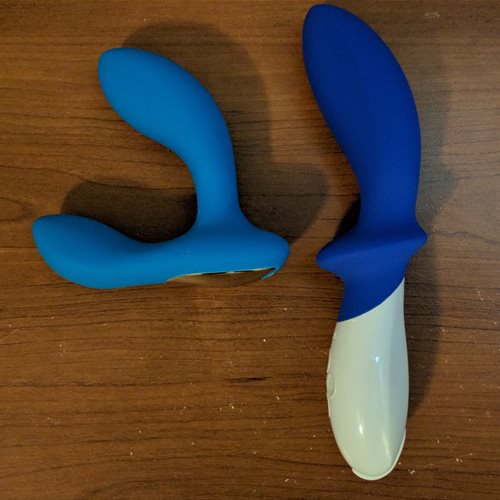 The fact the Loki doesn't force itself to lean forward aggressively is a huge plus for me. With the handle you can manipulate the lean of the toy once it's inside of you if you want more or less prostate pressure. It still has a forward bend to provide the pressure on the prostate vs being a straight shape that might not apply the pressure as directly.

I was lying on my back while using this toy by myself, the buttons are conveniently located for use in this fashion as they are pointed upwards during use that makes them easier to see if needed and easier to manipulate. The downside of this is that if it's being used on my girlfriend during sex it's a bit harder to manipulate while I'm inside her, especially after getting used to the remote Lelo toys. But it's still reachable and capable of being manipulated.

The toy offers the same standard vibration patterns as all the other Lelo toys I own, but without the SenseMotion remote vibration modes. It has 6 vibration modes that can be cycled through by pressing the up or down buttons to move forward or back through the vibrations modes:

The ramping pattern 4 starts with slower vibrations and then speeds up to faster ones then starts over as slower ones again, repeating this process. The ramping cycle is about 2 seconds but is very pleasant and keeps you from getting too used to the vibrations. Ramping pattern 5 slows to almost not existing; however, ramps up to full power faster vibrations then will slow back down to almost not existing, repeating this cycle over about a 4 second period. Pattern 6 is curious and I can't really explain it, but it's almost a random combination of changing speeds and pulsing, which if you are like me constant vibrations almost get tuned out so this is like a godsend. 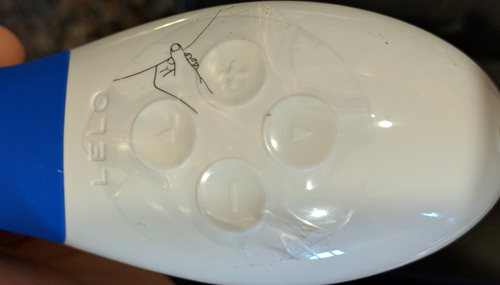 The vibrations of this toy differ from the other Lelo toys I own in that they are even more rumbly. They are very powerful when on full power and very enjoyable regardless of the vibration mode.

I used this toy for 1.5 hours with vibrations without any loss of power or the batteries running out. I kind of am curious how long it will last while on constantly; however, I haven't had time to run battery tests on this toy.

The toy is rechargeable, and you recharge it with the provided USB charge cable. It plugs into the base of the handle, which you can see in the pictures below. It also has a rubber cover that protects the charge port during use and keeps stuff out of it. The toy's buttons blink as it charges and will be solid as shown below when the toy is fully charged. 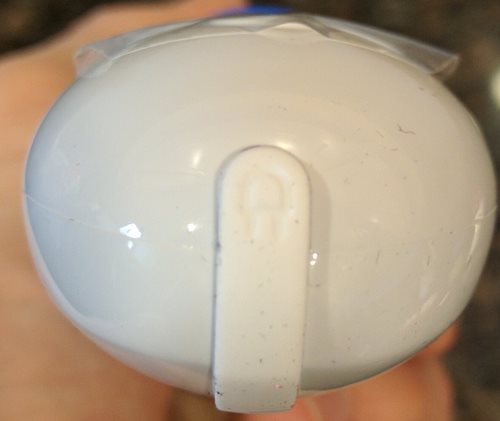 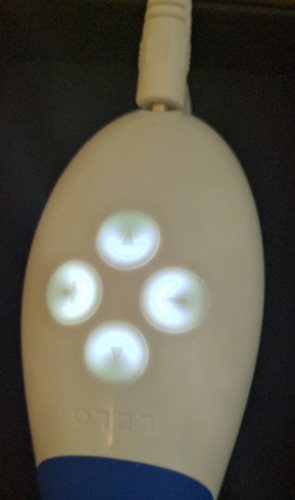 This toy is very easy to take care of, the luxurious silicone cleans up very easily after use. As the toy is silicone I would recommend only using it with water-based lubes and you should never use silicone ones. Might want to test any non-water or silicone based lubes on a spot on the toy before using to make sure it won't damage it. Also, the toy is 100% waterproof so you can submerse it and wash every aspect of the toy from the inserted part to he handle under warm/hot water. As it has electronics inside you should not boil this toy or run it through the dishwasher.

The silicone Lelo uses doesn't attract dust as bad as most other silicone, to the point it's difficult to tell if it has any dust between my using the toy; however, I always wash and re-sterilize the toy before use just in case.

The toy comes with a storage bag that you can put it in, that will protect it from interactions with other silicone toys; however, I currently am just storing it in the box it came in. It is very solidly built; however, considering the cost I'm unlikely to toss it into a box of toys even if it's in the storage bag. I actually have a toy dresser now for storing my toys.

The Loki box ships in the same discrete bag as the other Lelo toy's I've owned; however, you can still kind of see the toy through the bag so I wouldn't consider it to discrete enough to be used as a gift. 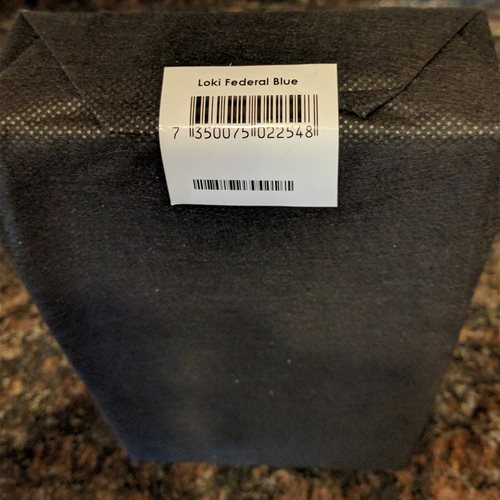 Once you get it out of the bag, you can see the toy through a view window. On the back of the box you have all the information about the toy, which is very informational. 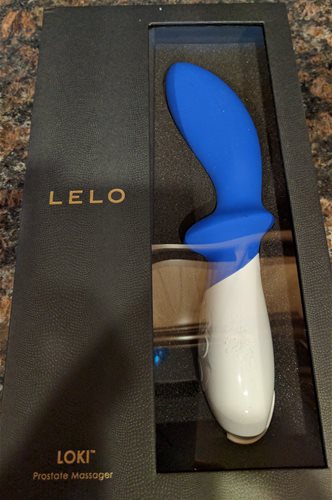 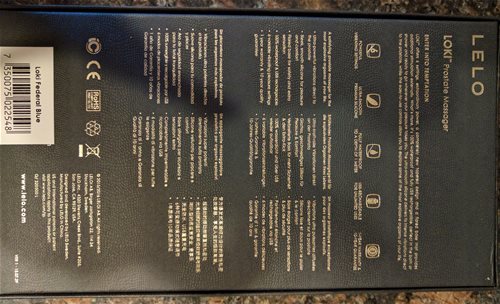 The top fits underneath the bottom, so once you've opened it, this allows the box to work as a great storage box for the toy. As you can see the accessories come in the storage flap on the side of the box or are stored below the toy. Once you get everything out of the box, you have a storage bag, USB charge cable, sample of Lelo lube, instructions for Loki, instructions for lube, warranty registration card, and the Loki toy. 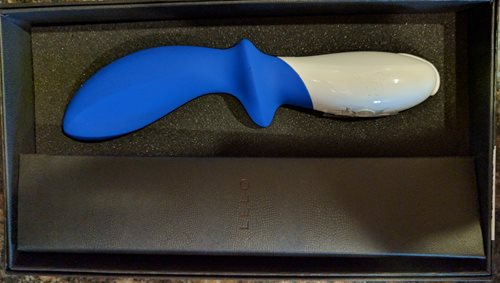 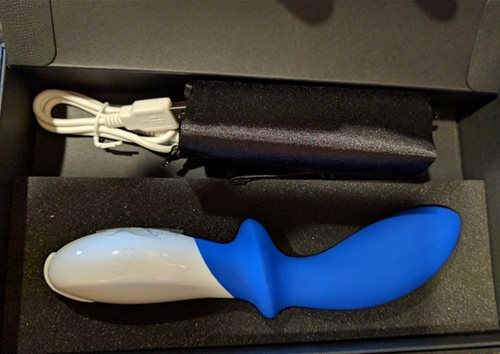 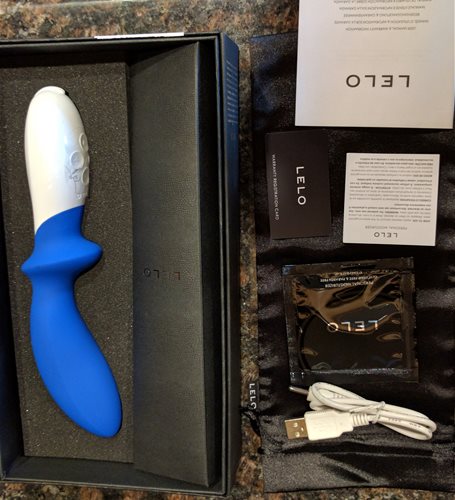