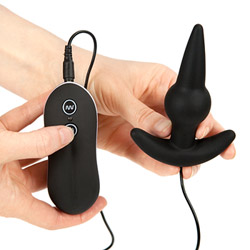 As the cord is long enough for another person to hold the remote during use, this vibrating plug could be used for couple's play.

While the remote-controlled vibrations may sound like a fantastic addition to public play, remember that the remote must be carried as well as the plug itself. Because the remote is attached via a cord, this may not be the best choice for public play. However, it would be possible with some creativity and by keeping the remote on the plug-wearer.

Perfect for shower use, this plug is entirely waterproof. Avoid submerging the remote, but the plug should be safe for use in bathtubs or shower areas for those who prefer aquatic environments for play.

The remote is made from hard plastic. Even the buttons are made from plastic (though that plastic is slightly glossy to make it easier to push with lubricated hands). There is a seam that runs along the sides of the remote as well as a divot along the front of the remote that helps with grasping the remote.

If you aren't fond of textured toys, the plug is going to be a good choice for you. It has no texture on it at all. The entire toy is made from the completely smooth silicone. There isn't even a tangible seam running along any side of the toy. While the plug isn't entirely rigid, it isn't very flexible, either. You'll get a very bit of bend along the tip of the plug, but otherwise, the rest of the plug is rigid and immobile.

There is no odor from the toy at all. It requires no "airing out".

The base of the plug offers a slim, T-shaped design. This allows the base to fit more comfortably between the cheeks. Instead of having a large base pushing against both sides of your skin, this plug fits snugly and with minimal pressure to the cheeks.

Over time, the plug will slide itself out of the butt. This is because the size difference between the largest spot and the retention area isn't large enough. However, this shouldn't be an issue for most people as the plug is really designed to "set and forget". It isn't designed for use while walking around or doing other activities that would help push the plug out.

The cord is long enough to run between two people; this makes it particularly good for partner play. However, the cord isn't excessively long, so you and your partner will need to be right next to one another to take advantage of having your partner hold the remote while you use the plug. It does, however, make it simple to use the plug during intercourse while still having the remote available at any time to change the vibrations, instead of needing to be able to get at the plug itself.

Simple to use, the remote offers two buttons to power the vibrations. There's a power button and then there's the pattern button. The power button will turn the vibrations on and off while the pattern button allows you to cycle through the available patterns. There is a decent amount of patterns here - however, there only seems to be a single speed of strong-ish vibrations. There doesn't seem to be a low, medium, and high. There seems to be a "high" plus a bunch of patterns such as dot-dot-dash or an escalation pattern. If you enjoy constant-speed vibrations at different levels, this plug doesn't offer that. However, it offers different pattern choices.

The slender butt plug base allows the plug to slide between the cheeks and sit comfortably. You will not have to deal with the base pushing into the skin of the cheeks while wearing it. Because of the cord running out of the base, it isn't recommended to "sit" on this plug while upright for long periods of time to avoid potentially causing issues with the wire. Instead, to care best for the wiring, try to use this plug without placing a lot of pressure on the base of the plug.

This plug is made from silicone material and, since it vibrates, it's also electric. These two things make it simple to care for, but it still requires some caution. Ensure that, during cleaning, no water gets near the ports or into the battery pack. The plug simply detaches from the remote to reduce the likelihood of damaging the electric parts during cleaning.

As this is made from a standard silicone, it's simple to clean. Just use warm water and anti-bacterial soap. The plug doesn't have any crevices or hard-to-reach places, so it's as simple as cleaning the entirety of the plug thoroughly.

If you're short on space or want things to be discreet, the packaging may not work for long-term storage. It's much larger than the plug and isn't discreet. A plastic bag or any other type of bag should be sufficient for storage. The silicone and plastic material don't pick up hair or fuzz, so this toy works particularly well for those who don't like to be picky about storage.

The packaging isn't discreet, but it does clearly explain what the toy is. One side of the packaging clearly displays the plug itself while the opposing side shows a photo of the plug. The box is mostly-rectangle-shaped which makes it easy for gift wrapping purposes.

For those who prefer a bit of information, the packaging clearly shares the battery requires (2xAAA), the materials (silicone and ABS plastic), and cleaning and care instructions. The packaging easily includes enough instructions for most people to easily use the toy straight out of the box.

The packaging states that the toy was designed in the USA while made in China.
This product was provided free of charge to the reviewer. This review is in compliance with the FTC guidelines.