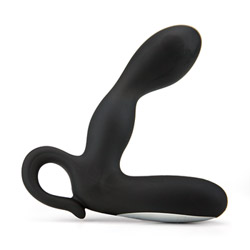 We love it when the same toy can provide orgasms for both of us. The strong vibrations can hit both my P and her G-spot. The design of this from the curve to the positioning of the bullet bulbs are perfect! The size also makes it easy to use for extended times, even sleep with it in. 8) 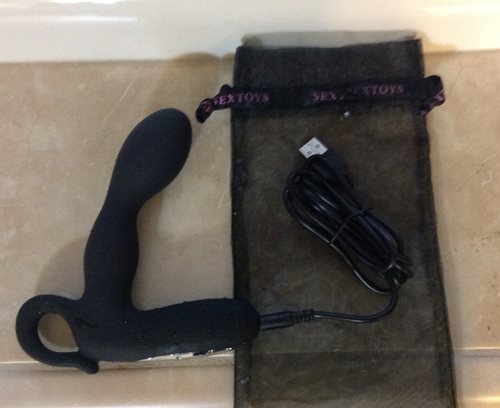 It has a nice handle and can be used for thrusting by oneself or a partner. With one of those U shape neck pillows, one can use it while seated. However, I will warn you, the power on this is very strong.

And as this P-spot toy is curved and has a bulbous tip, it is great for G-spot stimulation also.

If you are new to prostate massage or would like to learn more about how it benefits men, EF has a page explaining it here
Here's an excerpt from that page: "Prostate massage has an incredible pleasure and health benefits. Prostate stimulation improves blood flow in the area which is important to keep it healthy. Prostate toys make locating and stimulating the P-spot easy, and with so many nerve endings, prostate massage can also be a very pleasurable experience. There are lots of nerve endings in the prostate area making it a pleasurable experience."

Prostate massage can benefit men of all ages. Young or aging. 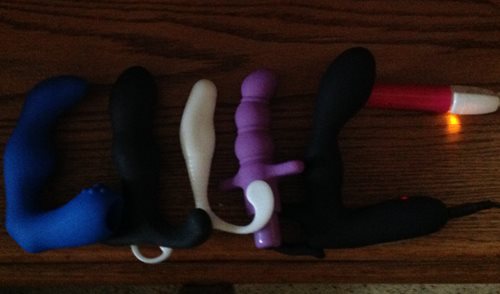 This is made of silicone. The battery housing is plastic. Both are body safe for sex play. Out of the packaging, it has a very slight fruity smell. The type of silicone on this has a matte feel meaning a slight drag if you run you finger down it. There are no nubs or ribs.

As shown in the video demonstration it is bendable in certain spots. The handle is very squeezable. It is firm where the 2 bullets are. There are seams on both sides of the shaft. Pretty much undetectable, you have to eyeball it to find it.

Silicone attracts dust, lint, hair, and whatnot easily. Best to wash it before and after every use.

There are various sizes of P-spot massagers available. I chose this for its size and shape. I found that larger massager gives a great full feeling, but slimmer ones vibrate better. A larger massager like the Lelo Loki Wave can produce a P and G-spot orgasm, but one sized like this P-spot Driver can do it faster. And you can go for much longer with it. 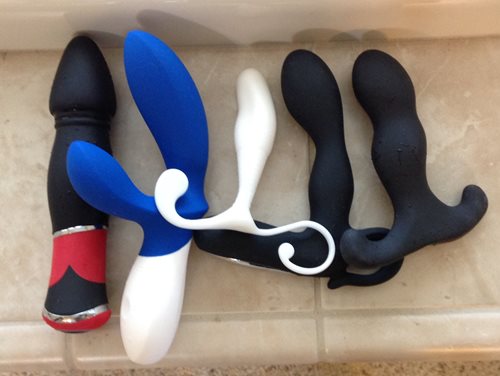 The Loki Wave is on the big side and causes soreness after 45 mins. The P-driver is larger than the Aneros MGX but smaller than the Lelo Loki Wave. I got this to replace the Lelo Billy, which stopped taking charge after 3 years of faithful service.

The large bulb/bullet on its curved tip feels great going in and hits the prostate perfectly. This bulb is 1 3/4" long and bound to hit just about every man's prostate. The second bulb/bullet is slightly smaller and will stimulate the numerous nerve ending near the anus.

This has a looped handle for easy withdrawal. The smaller tapered end by the base is designed to help keep the toy in. One of my pet peeves with the more expensive Loki Wave is that it slips out on its own.

As far as recommendations for users, I think it's good for everyone. Beginners may want to use a little extra lube and not go as long. Advanced and size kings will enjoy the immense vibrations.

Females will also love the design. Especially the curvature, length, and size of bulbs.

This toy is easy to use. One button to turn it on/off and another to change the patterns. When powered on, a little red light will come on. (that's displayed on one of the above pics) When powered on it will resume at the same left off.
In other words, if turned off on #1 steady humm. It will start there the next time powered on.

The button to change the 10 dynamic techno beat rhythm patterns is on the out end of the base. So when the toy is inserted, this button will be the outer one facing up. Makes it easy to change.

To charge just plug the USB cord into the tip of the base. (displayed on the pic above) This port is waterproof, btw. I received my massager already charged. A full charge will last about 1hr and 45 mins. To fully charge if totally discharged took about 70 mins.

There are two bullets. The larger one is on the tip of the shaft, and it's the strongest. The second bullet is in the next hump. It is strong but not quite as strong as the first one. The base doesn't have a bullet but will shake due to the strength of the other two.

There wasn't an included chart with the 10 patterns with mine. I tested them in my hand, and these are my descriptions.

The toy is not very loud. Can barely be heard under the blankets.

The Experience section will tell in details how well it satisfied us.

Silicone, stainless steel, and ABS plastic are the easiest toy materials to care for. They are super easy to clean being non-porous. Silicone, as everyone knows, attracts dust, lint, and particles easily. So it's necessary to rinse/clean before use.
I like to store this in a cup standing up, but even then will need to rinse it before use. For traveling, I would use a zip lock baggie.

Note: If you have any TPR or Jelly (yuke) toys, don't let them touch any of your other toys. Their materials can leach onto any others they come in contact with.

I recommend using a water-based lube with silicone toys. For this, I use the EF lubricant. 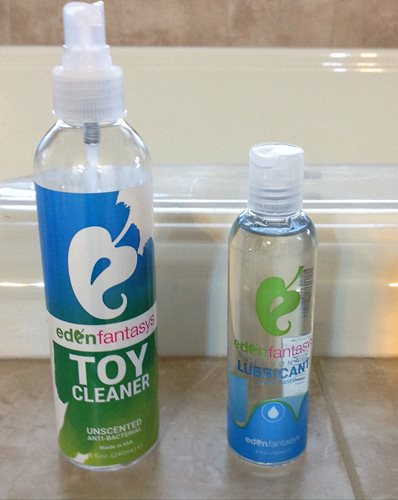 This arrived in a box with the Pure Fun douche kit. Both were in separate cello bags. In the cello bag were the P-spotter, a USB cord, and a black mesh bag. There weren't any instructions. Being an experienced toy user, I derived all the information right or wrong for this review on my own.

And like my Billy, the wifey, OW, loved it too.
Myself, I wish there was a low and high setting, though.

OW was the first to test this. She positioned the head of the shaft on her clitoris and cycled through the settings till found one she liked. She really enjoyed the powerful clit stimulation and was content to leave it there. However, I urged her after 10 mins to use it vaginally for purposes of this review. Now quite aroused she inserted it without lubricant.

Again she cycled through the techno settings until I heard her moan,"Aahh." I asked her, "Is it good? How is it ?" Her reply was, "Tell you later, busy now."

I asked, "Can you feel the base part on your clit?" Her reply was, "Not really. "The P-Driver is very flexible, so I moved the base up and started rubbing her clit with my finger. Apparently, she liked that because she re-positioned my finger and said, "Right there, honey."

The next morning I found the P-Driver on the bathroom sink totally covered with her juices. I think it is fair to say that the P-Driver gave her multiple orgasms.

After about 45 mins it seems like all my organs and even my penis were rocking. It got uncomfortable, so I had to remove it. The next ensuing sessions I learned to stop playing after about 30 mins. Better to have fewer P-spot's O's than rocking internal body parts.
Follow-up commentary   I still like it 10 months after original review
I still use this occasionally. I do wish the power was not so intense though. In time I will know if the new Dancing rotating Sensualist dildo will shelf this. Of course, if she is using the Sensualist I still have this to fall back on.
This product was provided free of charge to the reviewer. This review is in compliance with the FTC guidelines.

Reviewed by OH&W, Lovebears (Eden Advanced reviewer) Life will go on with or without us. Enjoy it while you can.
Rank
6.1
wrote 102 reviews
Comments
Make a post
Forum
No discussions yet.
Thank you for viewing P-spot driver – vibrating c-shape prostate massager review page!
Top