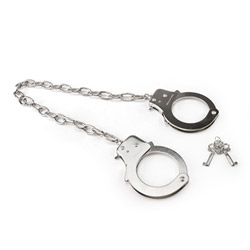 If you are looking for a good pair of handcuffs that give you enough chain length that you can let yourself out of them, or simply adjust your position to be more comfortable, then these are for you! They feel authentic but provide a little security with their escape lever. Just be sure you have small wrists as these are heavy and tight.
Pros:
Escape route, enough room to move around
Cons:
Too heavy, too tight
Rating by reviewer:
4
extremely useful review

This is for advanced users only. Handcuffs are no joke, and these are tight, so you need to have some experience with bondage before using these.

The design is extremely sturdy. These cuffs are heavy and likely resemble the real thing (sorry, I wouldn't know). So I would anticipate that these would last for a very, very long time. They can withstand some abuse and still come out like new. You can twist them, roll around in them, tangle them up, and they are still fine. A well-made product indeed.

The cuffs are made of chrome. This also makes them very heavy and adds to their cop-like appeal. The metal is smooth to the touch and has no smell.

Now let's talk about fit. The cuffs have about 2.5 inches of room for fitting which should be enough, but they also need to fit snugly. You don't want heavy cuffs jostling around on your wrists during play. So, although these should fit almost anyone, they really don't fit medium to large boned people well. My wrists are two inches wide, and they are too wide to fit comfortably in these cuffs. So, you need to be small in order to get the most out of this item.

These cuffs not only feature a lock and key system but also feature a safety lever that you can use (while wearing it I might add) to escape if need be or if you lose the key. Pretty handy if you ask me.

I really liked how well these cuffs were made, and that the keys were attached to the cuffs (no losing them!). In fact, I found that the keys were a little cumbersome to remove since they were attached to the chain by a tiny key ring, so I just left them there. I actually was able to cuff myself, which was a nice change and have my hands behind my back. How? Because the chain is long at 17 inches, there is room to maneuver. I could move my hands from side to side for better positioning during play, so I am sure I was more comfortable. However, I was less restrained and had enough maneuverability to release myself at any time.

Now, I found the cuffs to be uncomfortable, but I figured that was just part of the experience, so I did not think much of it. Releasing myself was easy as I pulled the release lever (I could not use the keys myself) and released myself. Then I noticed that my wrists were covered in red indentations. I did not have them on tight (they were snug, but not tight), so that had not been the problem. The problem was their weight. These are pretty much like the real thing, so you need to pay extra attention while wearing them. The marks were gone within an hour.

Clean with a cloth. Store with your other handcuffs (hehe).

These came out of their packaging! The cardboard box that they were in was there in the shipment box, but the handcuffs had slipped clean out of them. The box is white with a picture of a woman (taken in the 90s) cuffed in the front in a provocative pose.

Since the box easily opens, it is not good for storage.

All in all, these worked well. I was restrained and at the mercy of my partner (with an escape route, however). I was restrained enough that I had to get a little creative with positions and things got exciting!
This product was provided free of charge to the reviewer. This review is in compliance with the FTC guidelines.