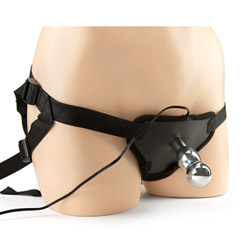 You should be cautious thrusting too hard with this toy though because steel can bruise the cervix if it gets hit too hard.

The harness is made from neoprene and is fairly comfortable to wear. The edges of the belt are soft and smooth so there's nothing really digging into your hips or anything while it's being worn.

When you plug in the electric shock remote this basically becomes a whole new toy. Suddenly it's also got a nice shocking aspect to it. Before using the electric shock anally or vaginally, I would strongly suggest grabbing it with your hand first to see how the shocks feel for you and if you think you could handle them internally. The remote has several different shock pattern settings, a button to adjust the speed of the shocks, and a dial to control how strong the shocks get.

It's not an extreme jolt of electricity or anything but it can be pretty intense and even borderline painful if you have it turned up all the way. The best thing to compare it to if you've never used a shock therapy toy is kind of a combination of when your leg falls asleep and gets tingly and that feeling when you have a lot of static build up and touch another person but less painful.

On the first pulse setting, and with the lowest strength you get a couple solid jolts every second or so. It's not extremely intense but it is definitely a unique sensation. I personally can't handle the shocks internally for more than a few seconds at a time but it is a really fun and new way to play. It's perfect for any kind of power-exchange play as well where the shocks can be used as "punishment".

Everything wraps up together easily as well so it can be stored in a drawer or something like that. Since the dildo can't be removed it's not very discreet, but it's also not a huge toy that's difficult to hide.
Follow-up commentary   I still don't like it 3 months after original review
I just can't handle the intensity of the electricity that flows through this thing. Even on the lowest setting it just hurts too much for me. It's a high-quality toy, and I think a lot of people would probably love it. It's just not my cup of tea.
This product was provided free of charge to the reviewer. This review is in compliance with the FTC guidelines.

Reviewed by Princess-Kayla ♥ (Eden Writer) Not a shred of evidence exists in favor of the idea that life is serious.
Rank
6.6
wrote 201 reviews
Comments
Make a post
Forum
No discussions yet.
Thank you for viewing Tingle steel strap-on set – e-stim strap-on review page!
Top