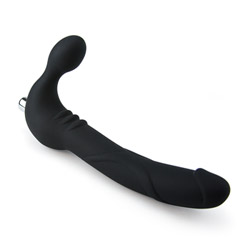 A Perfect Addition to your collection!

Fun toy that is pleasurable to both parties, but careful not to be around anyone else, it's loud. And it is a bit short, so you might have to fight to find a position you can penetrate your partner with.
Pros:
Easy to clean, strong bullet, nice texture
Cons:
A little short in length, bullet is noisy
Rating by reviewer:
4
extremely useful review

This toy is very similar to the Duo, but better. My partner and I were worried about the Love Link not being long enough to work with her further back anatomy, but thankfully this was the just right solution. We used this for anal, and will probably continue to use it. While it was still a bit short, and she chose to wear a harness to feel more secure about using it, she was in love with it and so am I. The bullet it came with was surprisingly pretty strong and well felt throughout the toy, something I hadn't thought would be too impressive.

The Love Link is also odorless, but I recommend rinsing it off to get any manufacturing dust off before any first use. Toys with the velvet soft texture tend to pick up dust very easily.

Plus as a bonus, I was able to use it solo as a handle toy. This was a fun little perk I hadn't expected was possible but I highly recommend for anyone who's toys don't work exactly as planned. I would say for solo anyone could use it, but with a partner it takes a little practice to keep it in for the top, and can be too short to actually penetrate for the bottom.

Like I had said before, the length is still a problem for us. It wasn't as bad as other ones of the design we had tried in the past, and I absolutely like it a lot, I would still make the length two inches longer. I still enjoyed that the bullet was extremely powerful, had multiple settings, and that the material is smooth silicone. My favorite feature is the velvet touch, but I would be even more into it if it had more of a bumpy texture instead of a relatively smooth one. Performance wise, it was great once we had to find a position that would make up for the lack of length. This is more of an anatomical problem for my girlfriend, but I could see other people who have vaginas that are further back also having the same problem. None the less, it was a strong, fun toy that is pure silicone.

There is one thing I think is very important to note: IT IS LOUD. Even with a bullet vibe, this is a noisy thing. I had left it on on the bed and left the room, which is how I test all my toys noise level, and I could hear it outside of the closed door. I would not use this with other people in the house.

Something that I thought was really nice was the fact this toy came with a packet of lube and a spray cleaner. I have used the cleaner after I used water to rinse it off and found that satisfactory. I personally don't bother taking batteries out when it's a small watch battery, which some would disagree with. However I haven't noticed a problem with the battery life in my other toys that use the same batteries. I do store it in a ziplock bag because I do not have a cloth bag to put it in. Though once I get an extra bag, I will be moving it. Silicone like any toy (minus glass) likes to attract lint, so I give it a little rinse or wipe it off with baby wipes before use. And with silicone toys, make sure you use a water based lube. Like the one the toy comes with!

Packaging was a simple brown box. The toy was in plastic and so was the bonus spray and lube.

Duo
$24.99
This product was provided free of charge to the reviewer. This review is in compliance with the FTC guidelines.