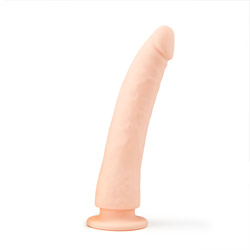 For me, it was a bit underwhelming, but I usually prefer my toys to do some of the work for me! I found it to be better used with a partner, since then I could use it to fill one hole, with him filling another. It could also be used with the aid of another toy for some extra stimulation, perhaps this one inside, and another small bullet to give a bit of vibration. It has a suction cup on the end, but I found that the suction cup isn't very strong, so I wouldn't rely on it to hold it in one place. However, it can be put into a harness and used as a strap-on. Since I don't own a harness, this was one area where I was unable to test it myself.

I do enjoy the feel of this toy very much. The matte texture of the silicone is very soft to the touch. While it doesn't feel like real skin, it does feel quite silky. It has a slight odor when first removed from the cellophane wrapper, but that smell dissipates rather quickly, especially after a couple of washes. It's a firm toy, with some pliability, but it's not one to be bent a lot. I suppose that makes it rather realistic, since you wouldn't really want to be taking an erect penis and bending it (unless of course, you're into that, I don't judge!).

This is meant to be a realistic dildo, and I can see how they tried to make it somewhat realistic. It's not overly so, however. It wasn't made in a way as to make it truly life-like. It does have veins, albeit not very pronounced ones. It's 8 inches long, with 7 inches of it being insertable, so it's definitely a good size. I found that to be a rather perfect insertable length. It has a 4 3/4 inches circumference, giving it a nice realistic girth. The head has a nice mushroom shaped separation from the shaft, adding to the realism. I'm not sure I would recommend this toy for a virgin, but if you've been penetrated before, this is a perfect size.

As for travel, unless you like having the TSA find a realistic looking cock in your luggage, I'd leave this one at home.

Since this toy is made of silicone, it's fairly easy to care for. It can be washed with soap and water or cleaned with your favorite toy cleaner. Do not store it with other silicone toys, however, as that will cause the material to deteriorate. Also, use only water-based lubes when using this toy. Silicone-based lubes will cause deterioration of the material as well. It can be sterilized in the dishwasher, or by placing it in boiling water for 3 minutes.
This product was provided free of charge to the reviewer. This review is in compliance with the FTC guidelines.