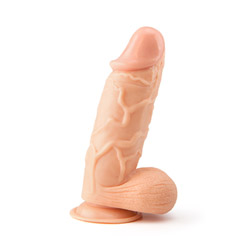 All in all, the Girthy Giant is not a bad dildo. He definitely takes some getting used to. I am taking my time with it, and I know I’ll be able to get him if not all the way in, at least part way. If you order this, do not give up working with it. You may just surprise yourself with how fun it is!
Pros:
The design is by far the best Pro, easy to clean, easy to store
Cons:
Need to be very advanced to use this toy, maybe a smaller head working to flare out
Rating by reviewer:
4
No votes for this review

The best way to use this toy, even for advanced users is to start slow and use a lot of lube. Do not skimp on the lube! You will need it! I had to start with my previous largest toy that is comparably smaller to stretch myself open. From there, I had to try to relax as much as possible because tense vaginal muscles just don’t allow for much to go in, let alone it being pleasurable.

I like how this giant phallic instrument is designed. It looks realistic enough, but sizeably too large for me currently. I most certainly do not recommend the Girthy Giant to average users unless they are will to work their way up to this size.

The best thing about this toy is its design. Since I’m still working with it, I cannot say that its size is bad. I really want to work my way up to the Girthy Giant’s size.

I suggest using only a water-based lubricant. Silicone-based lubes will cause this toy to break down and make it unsafe to use.
This product was provided free of charge to the reviewer. This review is in compliance with the FTC guidelines.