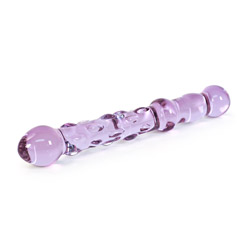 The Bingo's presentation is great. It has a very faint pink tint to it, but the color changes depending on the room color (it looked clear in my bathroom). It does not look very realistic, but has a realistic-looking head on it. The glass was very slick and easy to clean. The weight made it feel very luxurious, like an expensive piece of art. It had no smell and the glass was pristine, no mistakes. The bumps on it felt great but could be a bit much for a beginner. The opposite end (handle) works great for stimulation also.

The Bingos size was pleasant. I would like it to be a bit thicker for a fuller feeling. Other than that, it was perfect. The head on both ends of it felt great for insertion and clitoral stimulation. The bumps along the shaft felt nice when inserted. The bumps could be a little much for a beginner or if you became sore. When this happens you could use the opposite end of the toy. It is a long toy, therefore it is very easy to hit the cervix, causing pain when thrusting. This toy would be very hard to travel with, due to its length but I love it enough to make it work.

The Bingo preformed great. The visual appearance was stunning from the first time I took it out of its velvet packaging. Once used, it felt amazing. It did exactly what the description said. Its length provided a great sensation when inserted, although I do wish it was thicker though. I also wish that the head on the handle end was bigger for an easier grip. This would make it a little easier for anal insertion also. It worked well with lube but it was very slick. It cleaned up amazingly well. The Bingo would also work wonderfully with some accessories. This is a great toy to use in many different sexual endeavors.

The Bingo is super easy to care for. After use, I wash it with warm water and soap then dry it off. For storage I use the original bubble wrap and velvet bag it came with. I wish the bag was a little longer so it wouldn't be such a tight fit for the toy. The length of the toy makes it hard to conceal. Overall, if you are looking for a easy maintenance toy, the Bingo is it!

The Bingo came wrapped in bubble wrap inside a red velvet draw string bag, which is what I use to store it. It did not come with any instructions or plastic packaging. It would be a plus if it had some instructions on different uses for the toy.

For the first use my partner used it on me. He used it in a thrusting motion and it felt great using both ends. When we switched positions I used it for anal stimulation with lube. He loved it also, and it gave him more than enough stimulation for climax.
Follow-up commentary   I still like it 5 months after original review
I am still in love with the Bingo. It works great for both my partner and myself. It will not disappoint other users. I would buy this again and again!
This content is the opinion of the submitting contributor and is not endorsed by EdenFantasys.com

Reviewed by Missboomxo (Eden Advanced reviewer) Sex is a part of nature. I get along with nature.- Marilyn Monroe
Rank
4.3
wrote 17 reviews
This review was edited by
Comments
Make a post
Forum
No discussions yet.
Thank you for viewing Bingo – glass wand review page!
Top