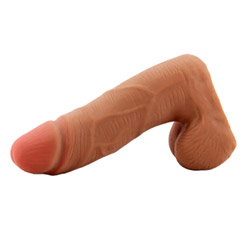 The summary is this; I would not recommend it to anyone; not beginners, not anyone, because though it isn't the worst product ever, it just doesn't do the job properly. It also has false advertising with the poseable feature, failing to mention how it moves on its own accord all the time, which is incredibly inconvenient. If that wasn't enough, it's so soft that it probably wouldn't be much stimulation to anyone.
Pros:
Realistic visually (though not very), soft.
Cons:
Too soft, too short, noisy, poseable core doesn't hold pose and constantly moves out of place.
Rating by reviewer:
1
No votes for this review

It had a film of powder on it when it first arrived, which came off pretty well after a few washes. It's really soft and squishy, which lends the veins and textures to it utterly useless. You'd think the firm core would help with that but it does not. When I'm really worked up, which is what you want during this, it feels like hardly anything inside me. This would probably bore even beginners.

The design is simple, not too bad visually, but it just overall does not work for its intended purpose. It is FAR too small, not even properly reaching my g-spot unless I really shove it in, and by that point there's no way to thrust it and it really doesn't feel like much. This is not discreet and it's definitely not for beginners, or anyone really in my opinion. It's far too small, and I'm not a size royal.

The best thing about this toy is just that it's soft, which is something I usually really enjoy. However with this product, the best thing about it is also one of its many flaws. It's so soft that you don't feel much of its girth or texture. It lacks majorly in stimulation and overall performance.

Cleaning for this product is pretty straight forward. Hot water does just the trick, with soap if you prefer.

Ultimately disappointing and frustrating, even for a cheap option.
This content is the opinion of the submitting contributor and is not endorsed by EdenFantasys.com