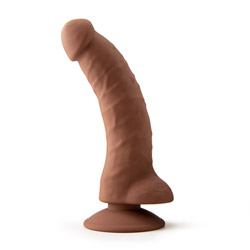 I believe this item is a great purchase. While there may not be any fancy moving features, the size and shape provide plenty of stimulation to get you off. Because there aren't any moving parts in this toy, there is less that can go wrong with it, and it's made of a non-porous silicone meaning it should have a longer life expectancy. If you're looking for a dependable, realistic dildo that can always hit the spot and fulfill your needs, I would recommend this.
Pros:
Realistic design
Firm
G-spot curve
Girthy
100% waterproof
High quality
No potential for movi
Cons:
No vibrations or rotations
Firmer than the real thing
Maybe a too big for some users
Rating by reviewer:
5
extremely useful review

I think the best way of using this toy is to ride it. It's fairly long, so you're less likely to end up slipping off of it. If you cant fit it all in at first, you can just leave an inch or so between you and the base until you can comfortably fit it in. I feel this toy is best suited for advanced-intermediate users. As someone with a medium amount of experience, I found the toy a little bit hard to take all the way in, and it definitely required some lube to get this girthy dildo in me. I personally really enjoyed the girth; it's pleasantly filling. If you're super aroused, this toy would be perfect for satisfying your needs.

The material is silicone which is a personal favorite due to its ease of cleaning and safety. It is fairly firm; if you press really hard with your fingers, it will squish a little bit. I've not had a dildo that felt exactly like the real thing yet including this one, though when I'm really wet down there, it does feel similar (it doesn't take that long to get super wet using this toy though, the thickness and the curve help get me going). The firmness is great for putting pressure on the g-spot to get you to that orgasm.

I think the curve on this dildo is great. It gets me super wet every time I use it. It has a great suction cup the suction cup material is firmer than the material of the rest of the toy to help it stay on better. As long as it's attached to the right surface, it will hold up well to riding. I can't speak from personal experience as to how well it works with a harness as I don't have one, but I'd imagine that it would work fine. The firmness of the toy added a lot of pressure to my g-spot which I really enjoyed.

This toy is fairly easy to clean; there are no parts you need to worry about getting wet so you can submerge it as long as you'd like and scrub it with soap and hot water. You do want to make sure you pay attention to the edges of the veins to make sure it's thoroughly cleaned. Like most silicone toys, you should use a waterbased lube and not silicone or oil-based one. Personally, I have a little storage box that I like to keep my dildos in, but it's recommended not to let silicone toys touch each other, so you could also keep it in the box it came in.