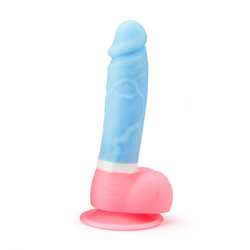 Bonbon is a wonderful, colorful toy for intermediate users. Its shape, by some divine intervention, seems to gently, indirectly stimulate my clitoral legs - something previously only achieved by pressure/soundwave toys. It is on the firmer side of the spectrum, but not as firm as the solid vibrators that have a thin silicone skin on them. I highly recommend it if you've never had your hands on a toy with these appealing curves.
Pros:
Silicone
Beautiful Colors
Phenomenal Shape
Excellent Suction Cup
Cons:
Bit too firm
No storage
Rating by reviewer:
4
extremely useful review

Before I get started on the [USE] of Bonbon, I'll give a brief description of how it arrived.
Bonbon arrived very early in the morn', in a brown cardboard box, filled with lots of brown cushion paper to keep it from shifting and getting damaged. The shipping label read "Web Merchants Inc.", as usual, so nice n' discreet. However, once you've opened the box, you'll be faced with the clear (sealed) plastic baggie, and there's no discrepancy on what it is.

[ USE ]
I like pleasuring myself in the shower, so the first thing that comes to mind when asked about the 'best' way to use this toy is answering 'in the shower' - be it laying down or pressing myself back against the tiles. Bonbon's shape is exceptionally good at dragging orgasms out of me - like it or not. More on that in the design/shape section. Majority of the time, I simply grip the toy at the balls or suction cup and slowly thrust it into myself while laying down in the bathtub.

I would recommend Bonbon for intermediate users - Edenfantasys lists the diameter at 1 5/8in, which a bit on the bigger side of medium toys. The whole toy feels very sturdy - the suction cup is one of the better ones I've come across from Eden - sticks so well that it even suctions to plain paper (that's attached to a flat surface). I've actually had a hard time detaching it from the shower tiles once (which you can alleviate with warm/hot water if it happens to you), but it's better it stays attached than having it detach at the slightest tug.

Frankly, this toy could be used in almost any and every situation. Foreplay, self-pleasure, pleasuring your partner -- hell, I even use the balls as a makeshift semi-firm stress ball. The balls will easily keep it from getting "sucked" into your booty, so it can be used anally without any worries. I do wish it were a bit softer/squishier, but that's just a personal taste of mine.

Bonbon's made entirely of silicone (hell yeah). There's a slight silicone scent that's noticeable when you first open up that plastic packaging, but after a few uses (and cleans), it fades away. I've never seen a toy with these colors, and they're very aesthetically pleasing. It's very, very realistic in shape alone, with many protruding veins - but to some, the colors I profess my adoration for may be off-putting. If you're anything like me, and you keep your eyes closed, then you won't be busy thinking about what color the toy is.

The material has a minimal drag to it (some silicone toys have a matte-like feeling to it; this is not one of them). The toy is on the firmer side of the spectrum, but not as firm as vibrators are. When I try to bend it in half, there is some resistance, but it still bends without me worrying that it'll break. Because it's silicone, I could say it's beginner-friendly, but the size itself is not for newbies.

Alright, this toy's shape is on point. 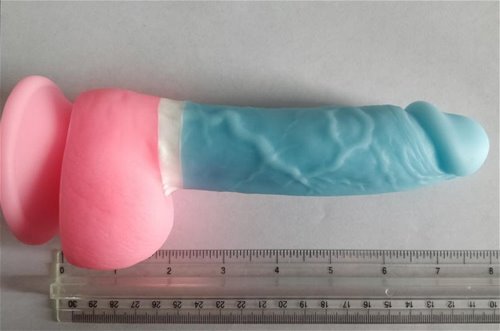 Everyone's all hyped about the G-Spot; I can't figure out why nobody's going nuts about the clitoral legs [clitoral crura (singular: clitoral crus)]. I strongly believe that what I'm feeling (aside from amazing vaginal wall stimulation) is *indirect* clitoral leg stimulation.

If you have a vagina, and you've never had your clitoral legs, (yep, that's a thing, look it up) stimulated by a cock, then get your hands on this beauty, and get it fast. Bonbon's unique because the head, although easily distinguishable and felt, is less thick than part of the shaft.

I never thought I'd do this, but here's a lil' makeshift diagram of Bonbon. It's a bit hard to see in the photos, so the diagram will have to do. This toy has these really, really nice curves to it, and these curves indirectly make my clitoral legs incredibly happy. 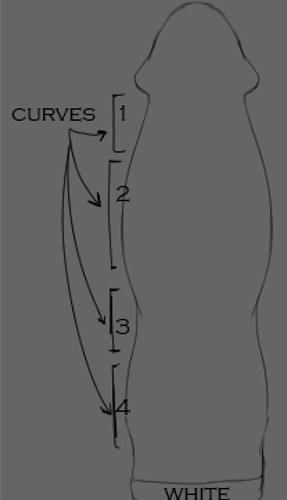 I mostly use the toy between curves 1 & 3. Curve 4 is a bit wonky, as it's very close to the base/balls, and it's a bit hard to feel it when you're filled with this toy, at least for me. Although the veins stick out quite a bit, I don't really feel them while moving the toy. This might be different for someone who uses it anally or orally (to practice blow jobs, I suppose?)

This toy's best feature is those curves that you can see in the diagram. They seem to stimulate my clitoral legs, unlike any other (non-clit) toy that I have tried to date.

It took me a long time to post this review because of that lil' discovery. I simply couldn't believe what I was feeling. The clitoral legs are a bit deep in female anatomy, and I had previously only been able to feel them when using one of those 3 pressure toys I mentioned earlier. With repeated "test runs", both with Bonbon and at least half a dozen other dildos, I can confidently say that this is the only battery-free toy (that I've tried thus far) that can elicit that unique (albeit weak) feeling on its own. Please note that it's not something you'll feel stronger if you thrust faster - at least for me.

Praise for the curves aside, I truly wish this were a dual-density or squishier model. It feels rather firm, and if you're thrusting away like no tomorrow, it does feel a little painful because of its hardness. The size isn't an issue, as I've used larger toys, it's just the firmness.

You can use toy cleaner or simply soap and warm water; I stick to the latter. Because the texture isn't of the matte-silicone type, it's not that much of a lint/hair magnet. However, I still do recommend you clean it before and after each use. If you choose to use lubricant with Bonbon, stick to the water-based lubes, as silicone-based lubes will damage the toy over time.

Bonbon arrived without any special packaging or instructions. It came with a clear plastic bag, as pictured in the first section of this review and nothing else. I really wouldn't suggest giving this as a gift (without warning or packaging it yourself) because the packaging is everything but attractive.

Normally, I'm able to stop myself from coming if I stop moving the dildo. Not with Bonbon. Even if I remove this toy, I end up coming. I *think* it's because of the indirect clitoral leg stimulation. A thing to note - these stop-to-not-let-myself-finish orgasms are rather weak, kind of like edging, I suppose. However, if I don't stop the movement & continue towards reaching orgasm (with a clitoral toy harmonizing alongside Bonbon), they're very, very satisfying. Another thing about those curves - in case I haven't mentioned earlier, they are felt very easily. I absolutely adore how my pussy adapts to them with each thrust. Watching this toy in particular move is ridiculously appealing as well - it makes the lips open and close a little with each curve, and just thinking about it makes me all hot and bothered.
This product was provided free of charge to the reviewer. This review is in compliance with the FTC guidelines.