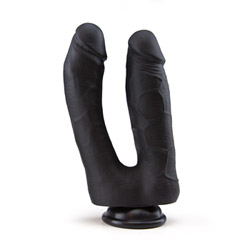 The Demon by Eden Toys is made from 100% silicone. Silicone is non-porous, hypoallergenic, latex and phthalate-free. The silicone is flexible and has a nice give to it that helps ease in insertion and makes adjusting to it easier for both beginners and more advanced users. The silicone has a light scent when taken out of the package for the first time, but it quickly dissipates with a wash. There is absolutely no taste to the material, so users who would like to use this for oral simulation or practice can do so without having a taste left in their mouth.

The texture of the shafts is realistic. It has what resembles realistic veining along them and a coronal ridge around each head with soft folds of texture to resemble foreskin. Both of the shafts are fairly smooth on the underside but still resemble skin in many ways. However, this texture doesn't really add to the stimulation, as the material is forgiving. 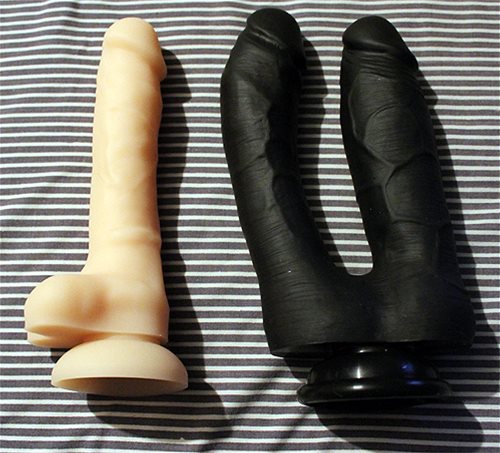 This toy is definitely not for travel purposes and will not be discreet if taking with you in your luggage. It's not easy to hide, and so if you're easily embarrassed, you'll want to leave this one at home.

The performance of this toy is amazing, as the dual stimulation of it feels filling, comfortable and the coronal ridge of the toy rubs all of the right places. In a harness, the toy holds up alright, but the suction cup base is a little flimsy for such a heavy toy, and can be a little awkward since it has two shafts. This should definitely be used in an o-ring style harness only, as it may have the potential to pop out of others. The base also makes it a little awkward to hold, and the suction cup doesn't work extremely well even on a flat surface. However, it's a toy that beginners can use if they're wondering what two average sized penises feel like, and overall this is one of those toys that you wouldn't think you needed until you've tried it.

This toy has an easy cleanup and can be cleaned in a number of ways sufficiently. It can be cleaned with regular soap and warm water, boiled, bleached in a 10% bleach (90% water) solution, put in the top rack of the dishwasher (without detergent) or wiped down with toy cleaner or toy wipes. The toy is non-porous so there's not a worry of bacteria clinging to the material and remaining there, so most methods of cleaning will be enough. Once the toy is cleaned, dry the toy thoroughly and store it in a cool, dry area out of direct sunlight. Do not store the toy with other materials such as rubber, jelly, TPR, TPE, Cyberskin or other porous materials.

When using lubricants with the toy, use water-based lubricants only . This is the safest lubricant to use with silicone as it will not have an adverse effect on the toy. Users may spot test silicone lubricants on inconspicuous places if they'd like. Should the surface texture change, discontinue use of the lubricant on the toy immediately and rinse the toy thoroughly.

The shipping was discreet and there weren't any labels on the outside of the plain cardboard box to indicate that the toy came from an adult store, right down to a discreet address that wasn't labeled as Edenfantasys. The packaging the toy came in was minimal, and it can be tossed or recycled. The Demon came in a clear plastic bag without instructions on care or cleaning and did not have any outer retail boxing. If gifting this item, buyers will have to get a gift bag or gift box in order to discreetly give this to anyone. Included in the shipment was a packing slip with information if you have any questions or need a replacement.

With the exception of the lack of suction from the suction cup, this toy is actually really great to have. My partner wondered what it would be like to be double penetrated and so when we got the chance to review this, we hopped at it. The suction cup could benefit from being a little thicker made to suction to a surface better in order to fully enjoy this for hands-free fun, but the dual shaft and their average sizes were perfect for a first-timer to double penetration. This brought her to a toe-curling orgasm without additional help. It does actually absorb lubricant quickly so we needed to keep reapplying every 10 minutes or so, but I attribute this to the matte material.
This product was provided free of charge to the reviewer. This review is in compliance with the FTC guidelines.