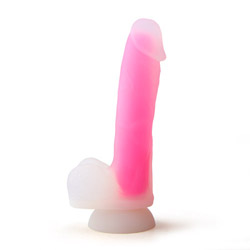 Glow With The Flow

The price of this toy can't be beaten! You definitely get more than you pay for when you buy the Dual Density Luminosity. It is a good, middle of the road sized dildo that will work for most women.
Pros:
Fun glow in the dark feature.
Wonderfully smooth and firm.
Cons:
A little more curve would be nice.
Rating by reviewer:
5
No votes for this review
My wife and I are in a bit of an experimental stage right now, and we thought this might make for some fun in the dark. When it arrived on the doorstep, my wife had to wait anxiously for me to arrive home from work, so that we could both open it and give each other our first impressions as we have become quite discriminating when it comes to our toy box. She met me excitedly at the door with the package in hand, like a child at Christmas! We sat down and opened it up. We were both impressed at how soft and smooth, yet firm the dildo was. Pink is her favorite color, and who am I to argue when it is one of my favorites on her? We placed it up on our bedroom window sill where it would get plenty of light to charge up the glow feature for our adventure later that night.

We've since used it in the shower, where we learned how powerful the suction cup on it was, and the cleanup was super easy. For what we paid, we totally got a high end feeling dildo for half of the price which makes it an amazing value and would recommend it to everyone!
Experience
Definitely let it charge up for a few hours if you want to use the glow in the dark feature. As always, use lube when needed, although it was so smooth, my wife didn't need any and be sure to use approved toy cleaners to keep everyone safe and healthy.
This product was provided free of charge to the reviewer. This review is in compliance with the FTC guidelines.