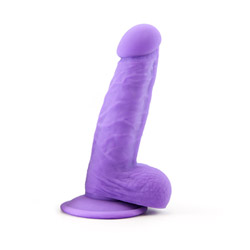 If you are looking for a toy, specifically for a suction cup, I would avoid this one. However, if the suction cup does not matter, this one works rather well by holding it in your hand. You can get up a good thrusting motion by squatting with it, though it would work much better if you had a partner to manipulate it.
Pros:
*Realistic
*Great design and shape
Cons:
*Suction cup is next to useless as anything but a handhold
Rating by reviewer:
4
No votes for this review

Personally, I found the best way to manipulate this toy in a solo fashion was to squat and thrust it in and out by grasping near the base. I think this one would work nicely for those who like a toy that feels more realistic. It compares very well to a real cock, and the balls are fairly realistic as well.

This one is made of Loveclone RX. While not as safe as silicone, I have found that it feels a lot more realistic. There was no smell to it when I got it, but there was a light coating of powder on it. It has a soft texture and is realistic to the point of having the large vein on the underside. It could work well for either beginners or advanced users in terms of sensation and feeling.

Overall, the design of the cock and testicles is very nicely done. It feels good while inside, and thrusts in nicely. It is flexible, so it can pop out if you thrust too rapidly and accidentally slip out. It is not so thick that it is uncomfortable, but it is thick enough to be enjoyable.

I found that the suction cup is not the best part of this toy. I tend to favor toys with suction cups, in order to use with solo play. My first impression when looking at the suction cup of this one was that it seemed rather flimsy. It is flatter than other cups I have seen, and a lot bigger. My first attempt at using it resulted in that the weight of the toy popped the cup free. The second time I managed to stick it longer resulted in popping it out while I was using it.

All in all, I just don't think the suction cup can hold up to any real usage. Anyway, I think that the toy itself is sort of averages despite this small defect, and can be a decent hand toy.

You need to clean this toy before and after each use with an antibacterial toy cleaner or mild soap, accompanied by warm water. Using a condom with the toy is recommended to extend its life. Just make sure to swap condoms before inserting it into a partner, if you intend to share it with others.

The only lubricant you can use with this toy is water-based, similar to a silicone-based toy. I personally store mine wrapped in a soft cloth and in a cool dry spot under the bed.

I didn't really like the packaging, which was a plastic affair with crimped edges. It took a pocket knife and cutting to get through the plastic and open the item. I've personally never been in favor of this sort of packaging, though it seems to be fairly common nowadays.
This product was provided free of charge to the reviewer. This review is in compliance with the FTC guidelines.