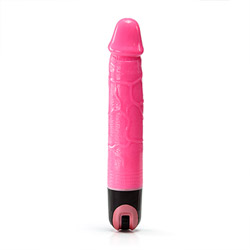 Not quite that intense.

The toy is slightly firm and has a nice texture. Appearance-wise, it has a typical veined appearance, but with the surprise of a subtle scale-like pattern near the base for no clear reason. There's also a slight seam running along the front and back of the toy, but it's just an aesthetic issue and doesn't cause discomfort or interfere with playtime.

One thing to take note of is that the cap takes quite a few spins to unscrew. This is helpful in preventing the batteries from sudden falling out during play sessions, but may be slightly irritating if you have to replace batteries. This toy is surprisingly long, in no small part due to the length of the cap with its dial, so people who need to be discreet may want to take that into consideration.