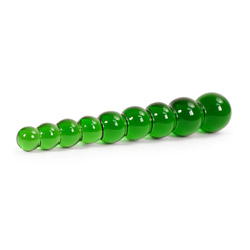 Perfect to be used by both of us, simultaneously

The price point of the Magic Scepter appeals to not just the budget conscious, but those new to buying toys. If you don't know a lot about sex toys or haven't yet discovered what you like, it's pretty natural to not want to invest too much financially. This particular dildo/probe is glass on a budget but it's a great example of getting your money's worth.


It offers a total of nine balls, graduating from finger sized to about golf ball sized. My partner preferred a minimum of three and no more than five. I'd always try to push it further but his requests were always respected. The man knows what he likes and who am I to argue with that?


With the silicone lubricant this toy slid right inside. First one ball, then the next. Because it's glass, it slid in and out easily, despite his efforts to squeeze his spinchter trying to prevent removal. He tried very confidently to resist the slipping and sliding of the toy but he was fairly helpless as with the use of liberal lubricant it became a bit too slippery.

It's a great warm up toy. It provides great sensations during play. But the best part is the clean up. While "bodily products" can get stuck to the underside of the balls, it comes clean in a snap. A bit of hot water, some soap, and a sponge and it's as clean as it was before we used it. We can also throw it in the dishwasher and boil it. Again, glass is just a great universal material that makes it ideal for sex toys.

All in all, this is a go-to, a favorite, and one of our best pieces in our collection. It's non-threatening, not gender specific (despite my never using it for vaginal solo play), and proves to be a great toy at an unbeatable price point.
Experience
My partner laid back on the bed. With a liberal application of his favorite silicone lubricant, Eros, I slid the smaller sized ball inside his ass. He's always been content stopping at the fourth ball. His general preference has been for me to slide the balls of the toy slowly in and out. This probe sort of doubles as beads, they just get gradually bigger but he noted the comparable "popping" feeling that one would get from beads going in and out.

He laid back and requested for me not to move it. He brought his legs up in the air and pulled me to him. I wasn't quite sure his intentions but he pulled my pelvis against him. While the smaller end of the probe was inside of him, I slid the larger ball into my vagina. I rocked my body against his.

I had no idea we could share an experience like this. We moved our bodies against each other, I was experiencing a double penetration, where he was being pleasured and I was as well. It was by far one of our HOTTEST nights together and some of the best "warm up" to sex we've experienced. I had no idea we could have done what we did and I was so happy with myself for buying this toy on a whim because the memory of that night will never be forgotten.
This content is the opinion of the submitting contributor and is not endorsed by EdenFantasys.com

My Magic scepter tags
About author

Reviewed by AMmistress (Eden Writer) Having an affair with a married man and having his baby
Rank
1
wrote 1 review
Comments
Make a post
Forum
No discussions yet.
Thank you for viewing Magic scepter – glass probe review page!
Top