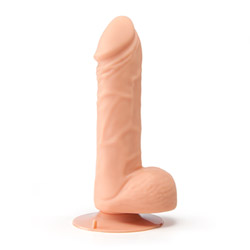 EdenFantasys
Other One touch reviews

Wow this is strong

The strong vibration and multiple functions make it useful for anyone wanting to have a little spice in the relationship or just a little solo play. With the size being a little big it can be doubled as a clit stimulation and just use extra lube.
Pros:
Waterproof, suction cup, and versatile
Cons:
It is a little big
Rating by reviewer:
4
extremely useful review

One Touch is very easy to use and versatile which is why I like it so much. Its Smooth surface has an easy on and off button that lights up when it's turned on. Strong vibrations and its 10 functions made it possible to spice it up and never get bored with the same function. With the suction cup, I could take it in the bathtub with me as the hot water hit my back I was feeling amazing as I used it and not having to worry about getting it wet due to it being waterproof. The fact that its cordless was amazing nobody likes to untangle cords before trying to have fun.I know its intended for more G-spot stimulation and penetration but it can be used for clit stimulation as well which was great for foreplay. Users can use it for anal but unless you are use to larger things in that area it's not advisable. This toy can be for beginners or an advanced user it all depends on the person and what they are used to. For someone who hasn't had pentration you might have to mainly use it for clit stimulation which feels great too but might be a little big for a first pentrative sex toy. For more advanced user the size might be great for them and the fact you can use it as a clit stimulator would be a bonus.

I love the feel of this toy. When I opened it up I felt the soft ,smooth ,yet sturdy feeling against my hand. I wanted to keep touching it to get a good feel of the texture. It was the nice silicone material which was really soft and non sticky. The realistic veins of it add an additional stimulation which feels amazing. It kept me captivated to want to try it. There wasn't a particular smell or taste to it which was a positive to it. The smooth texture left me longing to try it out. The texture is fine for both beginners or advanced users. I tried to bend it while it was in my hand it stayed regid n didn't move. When inserted it stayed in the same place didn't try to bend. Which I think is a positive having it stay in the same place it hit my g-spot and stayed there for continued pleasure.

I loved the design of it. Having a silicone suction cup to put pretty well anywhere that I would want is guaranteed for a great night of fun. It can be in the bedroom, bathroom, or anywhere you can think of. The size is a little big for me. It is 7.5 total inches with 5.5 insertable but that wasn't the issue. It was a little thicker it was almost an inch and half thick. There some stumbles with trying it to get it work properly. It was a little wider than I expected. As far as the uses it can be used for both advanced and beginners. The size can be argued for the more advanced user this definitely wouldn't be the first dildo for someone who hasn't had penetration before.

This toy performed very well in the water (shower) dont try to submurge it. Turning it on was super easy you hit the button to turn it on an a little led light looked like just a normal light coming under the silcone no reds, blues or greens. You have to rotate through the settings to find which one you like the best. It doesn't remember which one you were on last you might have to click a few times. It has an all over vibration to it which is amazing. The controls are super easy to get used to and to find out which setting you like the best. It is a little bit noisy so if you have a roommate or someone within a certain distance from your room might want to make sure that you have music playing in the background. It has 10 different functions which make it a nice toy to spice it up when you wanna try something different. There are three strictly vibrating settings which get stronger with each click the first one is a little bit soft but the strongest one is a true powerhouse to admire.

Its silicone material like how convenient this toy is to clean and store. Just use toy cleaner or some antibacterial soap and water. You can gently wipe it down with a wet wipe before putting any cleaner or soap on it. This toy should never go in the dishwasher or boil it in hot water it will cause permanent damage to the toy if you do so. Water-based lubes are the recommended lube for this toy to prevent from damaging it. Also, do not store this toy with other silicone toys they can fuse together if left in the same place for an extended time. You can leave it in its box for storage or with other toys that do not have the same material.

When the toy came in there was a black and white box with a clear front. So not really discreet about the fact it was a toy. Look at the front and it's front and center you know exactly what's in there. You can give it to your friend or lover but if you want it to be a suprise wrap it in gift wrap. The box is a fair size not to large so it can be shoved in a drawer with box included. The instructions after opening the box aside from the side that tells you how to remove the suction cup and mainly how to change the batteries. It doesn't mention how to clean it. Which if someone is new to toys they would need to look up how to clean and how to store it. Other than batteries it does have a paragraph saying please don't sumerge this toy. After reading that there was a paper inside the battery compartmemt saying which way the batteries go. Don't forget to remove that, batteries and paper don't mix.
Follow-up commentary   I still like it 18 days after original review
This toy is a little on the larger side. However, I use it for incredible clitoral stimulation. The material hasn't worn out, and the suction cup I can still use without penetration. I can simply use it to place against the wall while I grind against the toy. I want to keep this in my collection; the strong vibrations are enough to keep me satisfied.
This product was provided free of charge to the reviewer. This review is in compliance with the FTC guidelines.