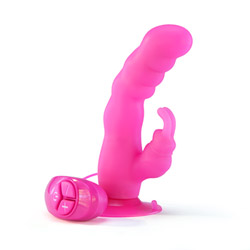 The Icy Bunny is a great toy if you like rabbits. It has awesome power, a cute look and a very pleasurable insertable shaft. However the power pack cord can be annoying and it is not quiet; if you need discretion think hard about this one. However, if you want a good medium-high powered rabbit and can close your door, this one is for you.
Pros:
Good power, great variety, motors in both shaft and clitoral simulator
Cons:
Loud, suction cup doesn't work, power pack cord can get in the way
Rating by reviewer:
4
extremely useful review

Those things being said at times having the cord can get in the way if you need to change positions and roll over on to it and/or the power pack.

The Icy Bunny is a lovely, almost velvety soft non-porous and latex free silicone. This makes it very body friendly and sterilizable. The sensation is wonderful. If you place the toy directly to your nose there is a very faint scent, however, it is not noticeable when it's not right on your face. There is no discernible taste to the Icy Bunny.

The toy is quite rigid though it is slightly bendable at the insertable end of the shaft where the ribs are; though this is not terribly noticeable upon insertion.

The rabbit ears clitoral simulator has it's own motor as well as the insertable part so you are able to get great clitoral stimulation but because it's through the two little ears it's a combination of hard and diffused vibrations so for most it should not be too much. There is another motor in the head of the shaft. This makes for great and even power during use.

The insertable shaft is slightly curved up (towards the clitoral stimulator) and has three soft, medium sized ridges, before the head which can make this great for both deeper penetration (which would mean for most people you are pressing the rabbit ears harder against your clit) or for a more shallow penetration (so not as much clitoral stimulation) which would give you g-spot stimulation.

The rabbit has a wide base, which can make it both easier or harder to hold on to, depending on your personal preferences. It is shaped like a suction cup and indeed as one of those little-raised pieces to detach the suction cup from where you put it, however, the rabbit is too top heavy for the cup to hold it in place.

This rabbit has a remote control attached to it via a 24" or so cord. The cord is permanently attached to the rabbit, but plugs into the power pack. This does make it easier to carry the power pack to wherever you keep your batteries. It takes 2 AAA batteries. The power pack has three buttons on it, one power button (with the standard half circle and line through it image) and a + button and a - button. When you push the power button it will turn on, however, you must hold it for a few seconds to turn it off. If you push the power button again you will simply change the vibrational pattern and pushing it multiple times will just cycle through them. The + and - buttons will then increase or decrease the power.

The Icy Bunny has two main motors, one at the end of the insertable shaft, the other in the clitoral stimulator. This works very well as you get the fully intended vibrations in both locations. There are 5 vibrational patterns with escalating, pulsating and plain vibrating patterns. You can also dial in the intensity you want using the - or + buttons.

The separate power pack is both nice and frustrating as you can bring it to you to see which button to push while keeping the toy inserted, but if you need to move you must contend with the cord and power pack getting in the way of shifting arms, legs or rolling over.

This rabbit is fairly loud, though; it can be heard over a tv if you have the door open. So this is a toy you would need to have the door closed and a tv or radio playing if discretion is a factor.

The suction cup is not functional; the Icy Bunny is too top heavy and tends to fall over.

Being non-porous silicone, the Icy Bunny will be easy to clean. Simply use a body safe soap, or sex toy cleaner to clean before and after each use, ensuring to rinse thoroughly. Because there are the ridges on the insertable part and the rabbit ears make sure to clean all body fluids and lubes out of those areas so they don't dry on.

Due to the power pack on a cord this toy is a little more difficult to store, but it is not insurmountable if you have a case or drawer to keep your toys in.
This product was provided free of charge to the reviewer. This review is in compliance with the FTC guidelines.