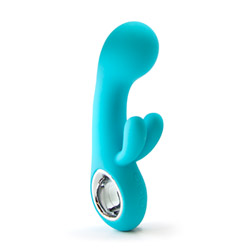 Alya is a beautiful new offering from EdenFantasys with plenty of intriguing differences that make it stand out from the crowd. The two vibrators in the clit attachment are a treat, and the vibration modes are creative. I would have liked more control over the vibrations and a vibrate-only mode, but this may be a benefit for those looking to mix it up. It was just slightly too short and too weak for me, but this toy could be perfect for you!
Pros:
Lovely design
Unique functions
Strong enough for most
Cons:
Internal/clit vibrations not controlled separately
Only patterns/modes
Will not fit all anatomies
Rating by reviewer:
4
extremely useful review

I was awestruck by the beauty of the Alya when it first arrived. The teal blue is just gorgeous and the silicone is soft and lovely. It looks and feels like a high-end luxury toy. 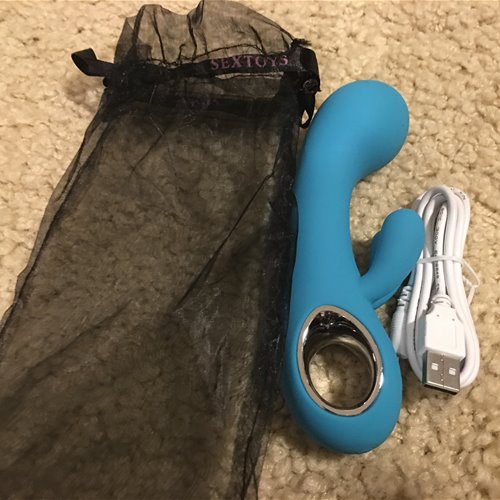 I'm not crazy about the bag it comes in, but it does well enough for storage. I just wish it didn't have "SEX TOYS" written all over it.

No directions were included, which proved to be a bit of a problem.

Before my planned first use, I charged the toy using the included USB charger. It lit up when plugged in, so I assumed it was fully charged when the light went off. 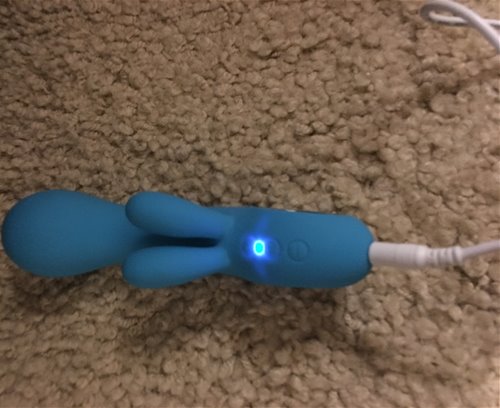 Imagine my surprise when attempt after attempt to turn it on failed! I tried charging it longer, pressing the + and — buttons at the same time, everything I could think of. Finally, I had to contact Support because I was wondering if I had received a dud. Luckily, they replied back very quickly with the toy's instructions, which I've included here so no one else has to experience my frustration:

*Controls
Activate the product by pressing the main button within 3 seconds
Cycle through 7 functions by pushing the same power button
Use the + and - buttons to control the intensity
*Charging
The full charge takes up to 60 minutes
Comes pre-charged, however we suggest charging it before first use
*Care
Wash it with warm water and cleanser such as EdenFantasys toy cleaner
Use water-based lubricant such as EdenFantasys personal lubricant 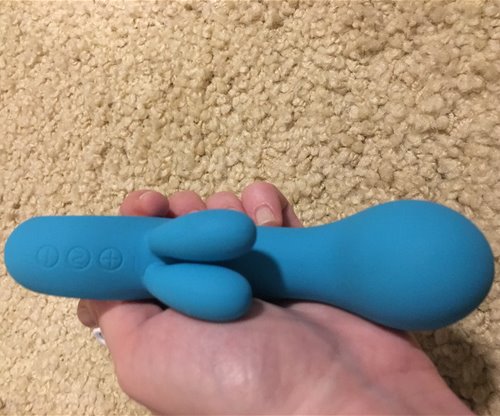 I had been trying to turn it on using the + button, but the middle button is both the on/off control and the function/mode changer. With this hiccup out of the way, I was able to settle in for my solo session.

I was immediately impressed by the multiple vibrators in the clit attachment. That isn't something I've ever experienced before and the sensation was spectacular. Unfortunately, it is a little too short to fully hit my clitoris and I couldn't get the amount of pressure I need there.

The modes were varied and interesting (and made full use of the different vibrators in the clit attachment), but there was no basic vibration-only mode. For me, this was a major turn off, as I like to explore patterns initially to warm up but need constant, consistent vibration to orgasm. I also would have preferred to be able to control the intensity and mode of the internal and external components separately. And the power, while formidable, was just a smidgen too weak for me. Alya is a relatively quiet toy, which is a major plus in my book.

I gave the Alya another try shortly after my first solo session and the same frustrations remained. I enjoy its unique functions, but wish some of the basics had been covered too.

No complaints from me about the texture or the size (I can't handle anything too girthy), and it worked well with water-based lube.

I think I'll make full use of the waterproof functionality next and see if that helps optimize my enjoyment of the toy.

The vibrations on this toy are no joke, and the two different vibrators in the clit attachment definitely pack a punch. For me, though, anything less than 5 vrooms just doesn't knock my socks off, so I wish Alya was a little bit stronger. That being said, it will be plenty strong for most people!

Despite my best efforts, I couldn't get an orgasm from Alya. I got very close a few times, but ultimately had to turn to my Hitachi to finish the job. Alya definitely got me good and warmed up, but I just needed that extra burst of high power as well as constant vibration instead of patterns.
This product was provided free of charge to the reviewer. This review is in compliance with the FTC guidelines.