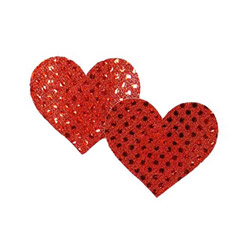 We weren't sure what to make of a pastie; however, these were a great set to start off with. And if we ever had a need for pasties in the future this would be exactly what we would be looking for.
Pros:
Good adhesion
Doesn't stick on nipple
Cons:
Single use
Rating by reviewer:
4
No votes for this review
Neither of us had used a pastie before and were unsure what to expect when reviewing this product. These are two sparkly hearts that sit atop your nipple, which can allow you to have a little fun or tease with your partner. I will indicate I felt the pasties did a good job accenting my girlfriend's breasts while she was wearing them.

The hearts are made of what appears to be a fabric, the description claims polyester that seems accurate. It is not super smooth on the back; however, it wasn't an issue for my girlfriend who wore these for testing. If you have extremely sensitive nipples this could either be a good or bad thing. For an added test we went on an hour long bike ride, while she wore them, to see how the felt over extended exerted movement while wearing. On some level there was also the thought they may work like nipple covers that marathon runners wear, not that this is their designed purpose. But she didn't feel any discomfort wearing them for that extended period of exercise while wearing, and actually indicated they weren't noticeable after wearing for a period of time, which is a good thing.

They also stayed adhered even with the significant exercise we got on the bike ride on a day that was in the upper-80s during the ride. I was also curious how well they would stick/stay attached after sweating while wearing them. The hearts have a circle in the middle that is where your nipple is to be placed, but a backer you remove that then has adhesive that like a bandaid allows it to attach to your skin. Even after the exertion while wearing them they were very firmly attached; however, thankfully my girlfriend has very little to no hair on her breasts so getting them off wasn't painful or an issue. If you are like myself though with significant hair on your chest and considering these... you may want to shave before using, as the adherence seemed to be stronger than that of some of the best bandaids I've used. But if you are wanting all day usage and potentially are wanting something to wear while outside potentially protesting the unfair discrimination of showing male nipples vs female nipples, as has happened recently... these would be a good option as they would not come off until you chose to remove them.
This product was provided free of charge to the reviewer. This review is in compliance with the FTC guidelines.