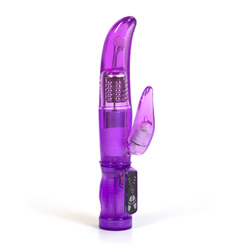 Ow is glad she added this to her arsenal. She missed her previous swirling toy. Though it did not give her a blended O yet, she will keep trying. Due to it's soft material and modest size does not require any warm up.
Actually it is a great warm up toy. The multiple settings on the clitoral tongue is where she starts.
Pros
Easy to use, strong swirling tongue and beads, powerful clitoral stimulation
Cons
Small control tabs, Nice if had on/off power button
Rating by reviewer:
4
extremely useful review

Simply, it's" Two Relentless Tongues To Caress You Inside And Out For Fantastic Mind Blowing Pleasure" (quoted from EF EDT page)

Both tongues may be used to stimulate the labia, earlobes, nipples and other erogenous zones.

The Eden Dual Tongue is suitable for all users. For newcomers, it is not too large and has low intensity settings available. For more advanced users it has good power on both tongues.

It can be used for your kinky threesome/DP fantasy. Some vibes don't leave much room, these one is just right! 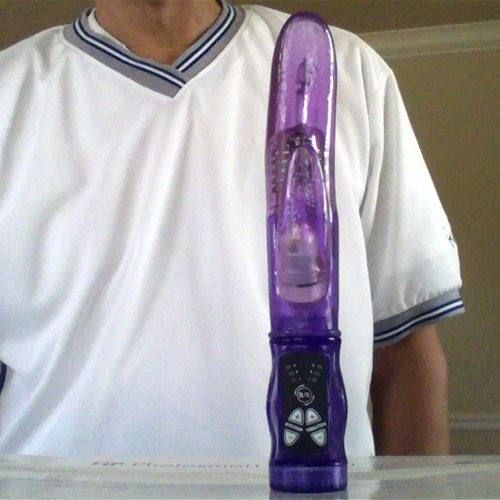 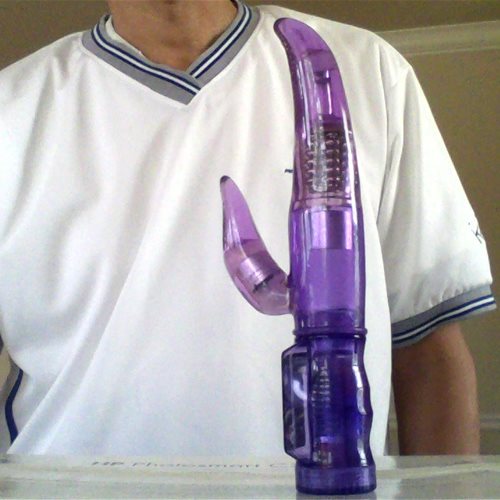 The business part of the EDT is made of Thermoplastic rubber commonly know as TPR. So it is very soft and flexible. TPR is less porous than Cyberskin, but more porous than silicone. It rates a 7 of 10 on the EF safe material scale. It is hypo-allergenic,latex free and phthalates free. When TPR toys are shared, condoms are recommend. The main shaft also has a metal set of beads that rotate with the tongue. The beads are covered by a thick layer of TPR.

The soft flexible material on both tongues are great for stimulating inside and out. Perfect for those who like it gentle yet firm. The main shaft though fairly soft but firm enough for easy vaginal insertion.

This TPR toy is very smooth and unlike jelly products has no smell. It is good for beginners and advanced users.

The control panel/battery holder is made of hard ABS plastic and has a waterproof design. 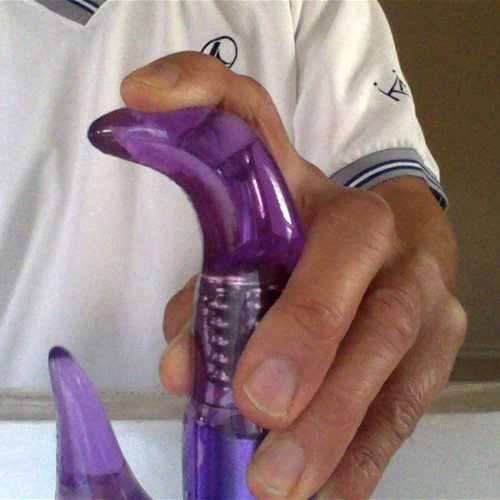 First, lets talk about the main tongue shaft. The soft but firm curved tip of the tongue makes for very easy insertion with just a little lube. Instead of a phallic head rotating inside of you, this does the trick with a nice soft 1 1/4 " wide tongue. This toy swirls with a greater radius than her Jopen VR-7 or Pipedreams Total Ecstasy Triple Simulator. The set of rotating beads add to the stimulation inside the vagina. For some these beads could apply constant pleasure on your G spot. Oriental wife could really feel the tongue swirling inside of her. However the beads did not do the trick on her G spot. The girth was a little to undersized for her.

The tongue clitoral arm is her favorite part on this toy. The good size bullet in the soft flexible tongue packed a lot of power. She's a Hitachi Wand lover so I'm not surprised. The tongue on this arm vibrates more than others due to the TPR material. TPR not only is very soft and flexible, it is very light. The bullet shook this little tongue violently ! The size of this clitoral tongue was perfect for her.

This toy is not discreet. Left out it would easily be recognized as a sex toy. Properly wrapped it would be easy to travel with. It's of average size not complicated and will not power on accidentally. 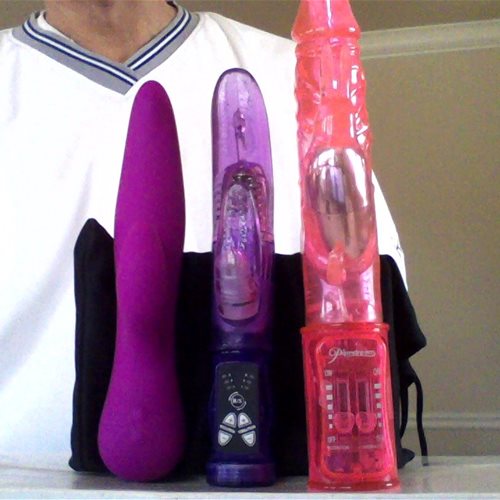 The Eden Dual Tongue performs very well. The main shaft rotates with power and quite a radius. Large swirls not little dabs ! The beads, an inch in length rotate with authority. The littler clitoral arm as mentioned is very powerful.

Both of the motors on this dual stimulation toy have 3 settings. 1.Low 2. medium and 3.high. It also has a reverse button in the middle of the control panel. When activated on the high setting it increases in power about another 50%. It has a + and - tabs to operate the individual motors. There are lights to show which setting you are on. 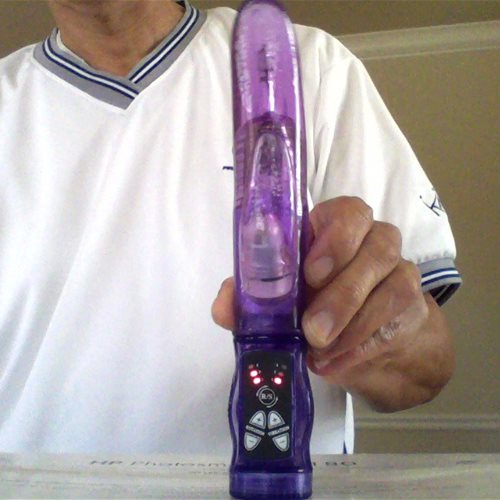 There is not an on/off power button. To turn it off just hit the - tab til it goes off. These + - tabs are very small. You pretty much have to use your fingertip/nails to push them. The entire control panel is waterproof. The entire toy is waterproof. You can put it underwater turn it on and watch it try to swim.

The toy is fairly quiet. At it's highest setting it's barely heard under the blankets. With the door closed you will not hear it. When you activate the reverse button on the high setting 3. and the power increases the 50% it will be substantially louder.

The Eden Dual Tongue is powered by 3 AAA batteries. They are easy to insert in the bottom of the base.
The toy including with batteries weighs only 8 oz. Lightweight compared to our Fun Factory Drei and Triple Dreamer.

TPR toys cannot be disinfected with boiling water. You can wash them with warm water and toy cleaner or mild soap before and after use. If you have any sensitivities you should use a water or non lubricated condom. You should not use an oil or silicone based lube with this toy. It, like silicone will attract dust, hair, etc easily. No matter where it is stored or left standing up, it will need to be washed before use. Do not boil this or it may melt. Definitely do not store it near any jelly (ick) toys or the color from the jelly toy will leach onto this. May even meld together.

This toy being 100% waterproof is easy to wash in the sink. No fears of damaging control panel.

This toy came in a low cost, no thrills packaging. No box, instructions, or anything. The toy and control panel is self explanatory. The toy itself was shrink wrapped. 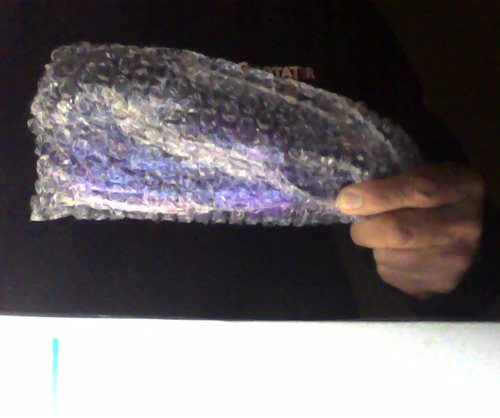 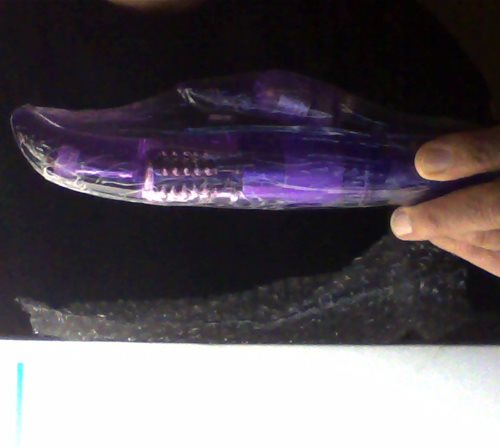 Oriental wife enjoys clitoral stimulation and started with the small tongue clitoral arm. After few seconds clicked the control tab and increased it to level 3. I suggested using a little lube, but she said, "No need."

We tried the large tongue on her clit and discovered it didn't do anything for her. She applied a little dab of lube on the large tongue and put it in her vaginal while leaving the clitoral tongue on level 1. She said it felt fine. After increasing both tongues to level 3, she said, "Now this is more like it !" After about 20 seconds lower the setting of the large tongue to level 2. Level 3 was not comfortable she said. After about 10 minutes of play, said, "I'm ready for you now!"

Her only complaint after the first use was it was hard to turn off. She kept hitting the Reverse button . In the dark it was difficult to find the - tabs. Also the tabs are very very small.

She has tried it on my earlobes, my nipples and my penis head. I did not particularly enjoy any of those.

Overall she likes playing with this toy and interchanges it with the Jopen Vr 7. She says the swirls are better on the E D Tongue and it has rotating beads, but the Jopen has more girth. Neither one has given her an intense orgasm though. 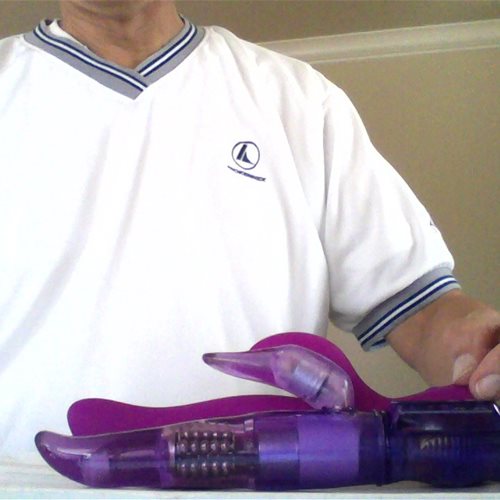 Follow-up commentary   I don't like it anymore 7 months after original review
Ow doesn't use this much anymore. The clit tongue vibe is strong and nice. Once inserted though, it is on the smaller side for her liking. Had she not other sizes, she would be using this one more often. It's slim size does enable dp easier though.
This product was provided free of charge to the reviewer. This review is in compliance with the FTC guidelines.