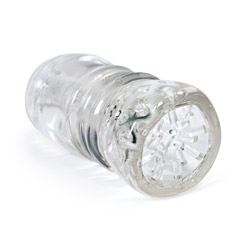 Although I loved the looks of this sleeve, the internal diameters and textures left a lot to be desired. It does provide a lot of suction when you get it on, but may be too tight, or short for many users. The non-realistic appearance may be more acceptable for wives and girlfriends than more porn star replication sleeves.
Pros:
Easy to clean, great look
Cons:
Design and textures are not stimulating in the right way, dust magnet
Rating by reviewer:
3
extremely useful review
The ClearFX Suction stroker was almost a great toy. There were several little flaws that added up to an unsatisfying experience. The ClearFX Suction stroker comes in a thin cardboard box that you will quickly throw away. It does not have explicit pictures of men or women on the box. However, it does show the toy itself which will be easy to identify as a pocket pussy. Inside the box, the toy is contained in a plastic holder which you may want to keep it in instead. The masturbator itself is about 5.5 inches long but is a little stretchy and may lengthen to about 7 inches. It is made from TPE and should not be used in conjunction with silicone lube or come into contact with silicone toys for very long or they will "melt" into each other. As a result, you'll want to use a thick, water-based lube like Maximus for use in the shower. The internal opening is wide for the first 1.5" of depth, but narrows to about 0.5" internal tunnel for the rest of the length.

The biggest problem with the design of the ClearFX Suction stroker is that initial wide opening. It is about 2" wide with "nodules" that stick out to provide stimulation. Unfortunately, it doesn't do that much stimulating because its too wide and feels more like a tickling or teasing toy. The internal diameter is much better, but goes in the opposite direction and is too tight. Even with lube, it is sometimes difficult to get into for even average sized men. If you are above average, the tightness of the internal length may be uncomfortable or you may find it tends to "launch" itself off of you like a spring. Even worse for the men with above average length, the short 5.5" internal length may not provide enough stimulation over enough area either. Finally, unlike a Fleshlight or other toys with a hard outer case, this toy will be a magnet for hair and dirt. Luckily, it washes off easily in the sink.

We found the performance of the ClearFX stroker to be average at best. Once it's on all the way, it does provide quite a bit of suction. Due to the closed end and the short internal length, users will have to use short strokes when using this toy. Also, the internal "ribs" of the toy are not easy to feel since it is so tight and the ridges are so small. Although it is nice to look at and can get the job done, it's not going to be on my top 10 list of masturbators.
Experience
Even though this one was not one of my favorites, I will say that the clean up after use is a lot less involved than a Fleshlight. Plus, at about $20, it is a lot less expensive than some of the higher quality sleeves. So, it has pros and cons. The best feature is one that I'm not particularly interested in: appearance. Because it doesn't look like a porn star's genitals or have someone's picture on the box, my wife was far more eager about using it. For that reason, I'm happy to have it in the toy box, despite its flaws.
Follow-up commentary   I still don't like it 1 month after original review
After using it every so often for a while, I still prefer other sleeves that have a longer depth and a more uniform internal size.
This product was provided free of charge to the reviewer. This review is in compliance with the FTC guidelines.

My Suction stroker tags
About author