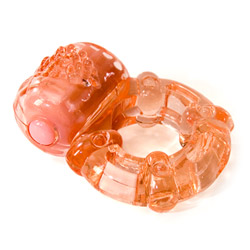 Beginners, Try Out This Thing.

Overall, this is a great little ring for beginners. It's easy to maintain and use, and will probably fit most everyone. I wouldn't recommend this for anyone who is used to more powerful vibrations or cock rings, as it will probably be underwhelming for them. For people new to vibrators and cock rings, however, this is a great toy. It's inexpensive and will almost certainly improve the experience for the woman (and, indirectly, the guy). There isn't much reason not to at least give it a try.
Pros:
Stretchy, great for clitoral stimulation, good beginner cock ring
Cons:
only two functions, pattern mode comes AFTER full-on mode, could use more power
Rating by reviewer:
4
extremely useful review

The Big O Ring is great for hitting your female partner's clitoris. In missionary position, simply adjust yourself so the bullet area makes contact with her clit area, and enjoy! Occasionally between thrusts I find it fun to pause while all the way inside her and grind the vibrating bullet up against my girlfriend to help stimulate her clit a bit more. This works well, as I don't think the vibrations are powerful enough to really vibrate the shaft of my penis a whole lot. I've heard having the female on top while using this toy can also be amazing, as it allows the female to position the bullet however it feels best on her clit. My girlfriend and I haven't tried this yet, but based on my experiences with this toy so far, I'm certain it would work very well.

As someone new to sex toys myself, I can safely say this is a great toy for beginners. It's simple to use (just put your penis through it) and clean (remove the bullet and wash the ring in soap and water), and does its job well. It's also fairly inexpensive, so the barrier for entry is pretty low. More advanced users might enjoy this ring if they typically don't use cock rings during sex, but it might not be powerful enough for those who have used other more powerful cock rings in the past.

It's made of TPR silicone, so it's soft and squishy to the touch and easy to clean. It actually almost feels gummy. While there is a seam, neither my partner nor I have noticed it, so it's pretty smooth as far as we can tell. There are little bumps and nubs all over the ring itself, and, while my partner and I can't tell if they actually do anything, my opinion is that they're unobtrusive and make the toy look more fun. The ring is also very stretchy while managing to stay tight enough (but not not too tight).

It doesn't smell, from what I've noticed (I haven't stuck the thing up to my face to sniff it, but I haven't noticed an odor simply while handling it), however it is a bit sticky, so keep this ring away from dust and fabrics that shed.

The Big O Ring is incredibly stretchy, and this is a good thing. I'm a bit wider than most guys, and this ring is a bit tight but still comfortable for me to wear for up to about 10 minutes. Although, from what I understand, you really shouldn't be wearing cock rings for much longer than that anyway because of the way they restrict blood flow to the penis. So the discomfort at that point could be a result of cock rings, in general, and not the design of the Big O Ring in particular. I'm certain this ring will fit the average guy, but I can see it being a bit too tight if I put it over my balls. Putting it on is very simple, as it requires simply stretching out the ring while you place your penis through it. If you are using a condom with this ring, be sure to put the ring on first so it does not sit over the condom. Otherwise, this could cause the condom to break as you thrust.

As I've said before, there are little bumps all over the ring part, but my girlfriend and I are unable to tell if they're actually noticeable during sex or whether they really do anything for the experience. The little, tiny fingers which stick out of the bullet and are designed to hit the clit are probably more useful. You have to go a bit out of your way for the bullet to really make contact with your partner's clit, but it's nothing unmanageable and isn't uncomfortable for the guy. If I could change one thing, I would make the bullet stick out a bit farther over the front of the ring. This would make it less of a reach between the bullet and the clitoris, but the ring works well enough the way it is. I'd also put a bit more power and more vibration modes in the thing, but I'll get to that in the next section.

This ring has three functions: off, full-on, and a mode which cycles through 9 different patterns. Pressing the button once selects the full-on mode, a second push selects the 9-pattern cycle, and a third push turns the ring off. Being able to select each pattern individually would be nice but would be a hassle if you had to push the button to cycle through all of them.

The power isn't great, but it should be fine for most beginners. My girlfriend prefers I just leave the ring in the full-on mode because it has the most power and gives her the most pleasure. The pattern mode would probably work better, despite the low power, if the bullet was constantly up against her clit, but it's obviously not. By design, you have to thrust with a cock ring, which means it's constantly breaking contact with the clit.

The other problem with using the pattern mode is twofold: you have to reach down awkwardly to push the button in order to switch modes, which can ruin your rhythm, and the pattern mode is not directly followed by the full-on mode, but is instead followed by OFF. This means if you want to switch from the pattern mode to full-on for a big finish, you are going to completely ruin whatever you had going. You will most likely have to stop thrusting, reach all the way down to your nether region, and have to push the button on the ring not once, but twice. In addition to all that, the ring is guaranteed to be turned off in the process (for however short a time). After all this, you or your partner is probably going to have to work back up to where you were before. Putting the pattern mode a button press BEFORE the full-on mode would have made much more sense to me.

The ring is a bit buzzy, which might be enough to be heard through a thin door, but can be drowned out by even some moderately-quiet music. It does its job well for me and my girlfriend, though, as we're both new to the world of sex toys and vibrating whatnots. According to her, the vibrations feel incredible, and she prefers to have sex with the ring on as opposed to off, whenever we can.

The ring is made of TPR silicone, so it's more porous than regular silicone. It, therefore, is possible to spread bacteria and infectious organisms via this toy, which cannot be boiled. Despite this, it is still very easy to clean. Simply remove the bullet from the ring and take some soap and warm water to scrub the thing down. Clean the bullet separately, taking care so not to get it very wet. A damp paper towel or cloth can work.

Storage is simple as well. I like to keep it in a plastic bag, since it prevents any dust or materials from sticking to it. Try to keep it out of the heat, and avoid direct sunlight. Putting the plastic bag with the toy in a reasonably cool drawer should be fine.

Be sure to only use water-based lubes with this toy, as silicone-based lubes can cause an interaction.

The Big O Ring comes in what, basically, amounts to a plastic baggy that cannot be resealed once opened. It can probably be stored in there temporarily after being used, but since it does not close, I'd recommend just tossing the packaging once you open it and storing the ring in a Ziploc bag.

The packaging isn't very discreet, either, which I don't mind, but it's something to consider. "The Screaming O" is written in large letters near the top of the packaging, with the tagline "Keep 'em screaming!" just above it. In case this wasn't enough of a giveaway, the ring is completely visible through the clear front of the packaging. It's pretty obvious what's inside from the first glance.

Personally, I can take it or leave it. The Big O Ring does stimulate me a bit while wearing it, but it's nothing to write home about. I also realize that part of the purpose of cock rings is to prolong ejaculation in males, and it works to some degree. I wouldn't really say it's made too much of a difference, though.

My girlfriend loves it, however. She prefers I wear the ring whenever we have sex, and it really does stimulate her quite a bit. The ring doesn't really vibrate my shaft too much, but she says it still feels good. The majority of the pleasure this ring provides her comes from my pressing the bullet up against her clit while thrusting, and she tells me it feels amazing. While I have not managed to give her the "big o" using this ring yet, I've definitely come close. A ring with more power would probably get the job done, but might also be too stimulating for her, as she is new to vibrating sex toys and cannot handle strong vibrations for very long. Regardless, this is one of her favorite toys, and it's very easy to tell how much she's enjoying it while we use it (my music has to be turned up quite a bit louder).
This content is the opinion of the submitting contributor and is not endorsed by EdenFantasys.com