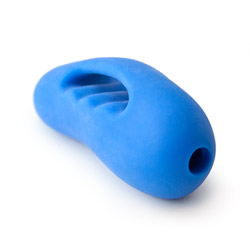 This toy is hard to get going with; however, it's reasonably enjoyable once you are inserted and begin stroking. For the cost, it is a good option for a stroker and seems like it will last far longer than many others I've reviewed at this price point.
Pros
Will fit most
Cons
Opening
Rating by reviewer:
4
extremely useful review

The toy offers a narrow opening, that 's hard to enter (more on that later), and has a nice hand holding grip to keep the toy in hand during use. When held in hand it is easy to stroke during use.

The best use of this toy is when you need a little 'me time' and want to stroke one off.

The toy is made of a TPR material that is soft and stretchy, while being latex and phthalate-free. It is a 7 on the Eden toy material safety scale, as it's a reasonably safe material; however, it is porous and thus can't be completely sterilized. As such it is not recommended to share this toy.

The toy has a slightly raised ridge texture on the inside, which I only really got to know is there as I've turned the toy inside out... it is barely noticeable during use.

The toy works in a lot of ways, as it's longer than many of the other strokers I've reviewed for EF so far. It has a 5" insertable length; however, the material stretches when you hit the end and can be pushed a bit beyond that. I'm a little over 7" and could get about 6" inserted with some distention of the toy; however, this will likely result in material failure faster over time. Still, it's less of an issue compared to the other TPR toys I've reviewed that were smaller and distorted the same as this toy had enough thickness that it didn't allow too much distortion.

The biggest issue I have with the toy is the opening. It is a nondescript opening at one end that is cone shaped going to the opening; as a result, if you are wider than the toy then you tend to slide off to the side and not into the toy. I found it extremely difficult to get into the toy, and this resulted in a significant amount of lube running out of the toy during the process of trying to insert my member into it. 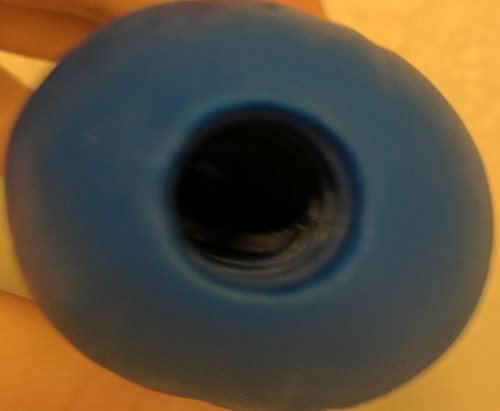 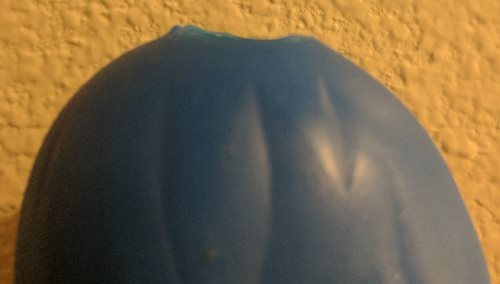 Once inserted the toy has some slight ridges, that were enjoyable but weren't real noticeable, so they didn't really add or detract from the experience. I found that the toy needed lube more than I would like.

The toy is obvious what it is/for; however, it isn't graphic in its nature with female genitalia or other life like naughty bits... as such it may work for travel.

The toy is reasonably easy to care for, especially since the toy can be turned inside out, which makes clean up easy after use. I just washed it off with hot water and then dried it off inside/out.

The toy is TPR so should work with any kind of lube; however, the use of lubes that aren't water-based will make clean up significantly harder.
This product was provided free of charge to the reviewer. This review is in compliance with the FTC guidelines.