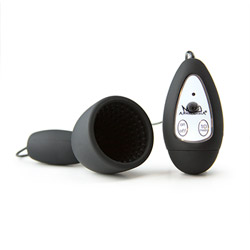 Designed For Those Needing More Stimulation

Powerful toy for stimulating the penis, both in solo play and as a part of couple play. Drains batteries quickly and the cord can get annoying. But in general it's got a lot of power to bring to the action and I think many people will enjoy adding it to their bedroom toys.
Pros
-Strong intensity
-Good for male solo play, should do the job quickly
Cons
-Hard to clean
-No ability to control intensity of vibration, only pattern
-Short cord is annoying
Rating by reviewer:
4
No votes for this review
This was assigned to me by Eden, it's not something I would have chosen on my own. But I was game to see how it worked and whether it was a "winner". I am in a heterosexual relationship, and frankly my boyfriend was a bit daunted by it. As soon as he saw it and felt what he did he was not really that interested in trying it. The style is definitely outside what we've tried before.

The packing is a quite bold, screaming "Warrior" in big font. It's not discreet at all. It's designed to stimulate the head of the penis. There is a controller on the end of a cord for the stimulator that does on/off and controls the pattern of the buzz. There is no intensity control. The device itself has a buzzer and at the end of the buzzer is a "cup" designed to cover approximately the first 1.5 inches of the penis. Inside it has many little "hairs" that will stimulate while the whole thing buzzes. The buzzing intensity is quire strong. The whole cup can also be used for a light buzzing by just brushing it across sensitive parts of the body. This is probably a better use of it frankly. Once I tried putting it on his penis, he described it as the feeling of a very specialized kind of blowjob but quickly declared it was "too much". He said it could be used briefly to aid in erection, but after that if you kept using it, that was all you were going to use for orgasm and it was going to happen very quickly. Since he was not interested in it I "modified" it for female use. If you cut the cup off it, the buzzer bee is still enclosed in the material and it is quite powerful, so now I can use it during foreplay!

It's a potentially useful item for solo play, and for some stimulation during intercourse. The cord on the item gets irritating. If it's going to have a cord it should be longer. The batteries also drained pretty quickly, probably due to how hard the bee buzzes. I give it a generally positive review for open-minded couples.
Follow-up commentary   I've started to like it more 27 days after original review
Well, this is a no-go for my boyfriend. However, I did find a use for it with modification. The cup is solid, so I cut it apart to preserve just the inside top of the cup and the tickling attachments. Essentially, I made a tickler for the clit or nipples. It works well in this modified situation for my needs.
This product was provided free of charge to the reviewer. This review is in compliance with the FTC guidelines.