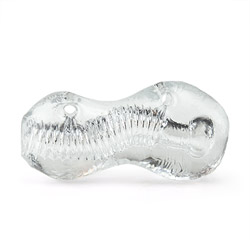 Very unique design but the very firm construction material and "S" shaped internal chamber, it can be a "unique" but very tight fit.
Pros:
Unique "S" shape, Clear, Economical
Cons:
Very tight, May be too short, Internal ribbing "scrapes" off lube
Rating by reviewer:
3
No votes for this review

The opening is plenty firm, which I liked, as was the interior chamber but air captured inside after insertion had to be released...I slide my little finger along the side of my penis to release the air pocket, fully insert, and slide my finger out. Getting the air out of the very end was extremely hard. I liked the interior "S" shaped chamber. With my girth, the ribbed interior felt good but was too tight for me...it was hard to keep the lube in place because the ribs pressure kept "scraping" the lube off the surface of my penis and would quickly begin to be irritating.

I liked the grip / pressure of the Booster Stroker once fully inserted but given my girth and the shortness of the internal chamber, it just wanted to slide forward and pop off. I had to concentrate to keep it on my penis which was annoying but it felt good. I found this to be distracting the longer I used it regardless of the good sensations.

The Booster Stroker has an interesting feature due to a small(?) chamber at the end of the internal shaft. There is a final, smaller rib before a round-ish chamber, clearly for the penis glans to "enjoy". Initially, I found it pleasurable and different but quickly became sore. The following morning, my glan was clearly "bruised" and was tender for several days. For me, the chamber was clearly too small. It could be that this chamber at the end is for lube to collect and not to be entered. If that is the case, the insertion length would clearly too short for me.

Aside from that speculation, I could get my entire penis inserted but it was very tight, a tad short...I was stretching it laterally and lengthwise. It felt good for a very, very short period before the lube was "scraped" away. I began to like it was mainly designed to squish my penis down to the size of a hot dog!

I found the two "finger holds" interesting...for stroking action. Due to the "S" shape, the stroking action keeps the Booster Stroker in one orientation to the penis...rotating, twisting it, really does not work well.

I liked the closed end because it creates suction and provides an area for lubrication to collect.

The construction material is very firm with some stretch but not a lot. With my girth, I found when well lubed, even with it's "S" shaped interior chamber, it wanted to slide forward and "pop" off. It is easy to clean with mild soap and water. When it is "dry" it is still tacky, so I store it in a zip-lock bag with some talcum powder.

The design shape is very unique. Not a simple curve or straight but "S" shape allowing for extra rubbing / pressure on the top of the penis near the base and on the under side of the penis just below the head / glans, where the penis is especially sensitive. Unfortunately, for me, due to my girth, those areas would get sore because the tightness / pressure would become to great.

The two "finger holds" are unique and were handy, but figuring out with fingers to use in these holes became annoying. Certain combination of two fingers felt fine for awhile but then got sore...using muscles / tendons, not used to being used in that fashion...? I kept having to change fingers when others got sore...distracting...

Easy to clean with mild soap and warm water. It can be hard to dry the inside...I stand mine up with the opening pointed downward, at an angle, and the moisture drains out and/or evaporates. Then, I store it in a zip lock bag with some talcum powder.

For me, normal water based lube works best. Jelly type lube is much too thick for me, since it is so tight.

Follow-up commentary   I don't like it anymore 7 days after original review
I tried it again recently. There is just too much to deal with...finger holds, "S" shape limits the ability to rotate it, too small internal size and too short for me...you get the idea...

The good side is it is economical to try out, so, if you wanna take one for a test drive, it is not a big deal if it does not light your fire...
This content is the opinion of the submitting contributor and is not endorsed by EdenFantasys.com